We need somewhere to sit. We had created a new garden by putting in railings and flower beds but there was nowhere to sit and drink it in. The sun was shining and I wanted to sit in the sun drinking gin. We needed a table.

look there is a stone table for sale like the one we saw before.

We had been on the hunt for some garden furniture, large and round and preferably all weather. Whilst looking on ebay I had seen a stone table that was the perfect table. It was round, hand carved, sandstone and came with three stone benches it was also not too far away in York for us to pick up opening bids were £150. I put a bid in of £500 and began planning how to pick it up but I was outbid and it went for £800. It was disappointing but maybe now I had found the perfect table we could buy it new. We could it was for sale for £1691, that is a lot of money maybe we would just stick to the camping chairs this summer.

I have found one!

A month later another stone round table came up for sale (I put a search on ebay to send me alerts if a stone table within 70 miles was listed). It was exactly the same as the previous one and they were in Driffield. It was only two benches not three, that was fine. It was also buy it now for £130! I quickly bought the table. Turns out the woman was selling it on behalf of her parents and I arranged to pick it up that weekend. 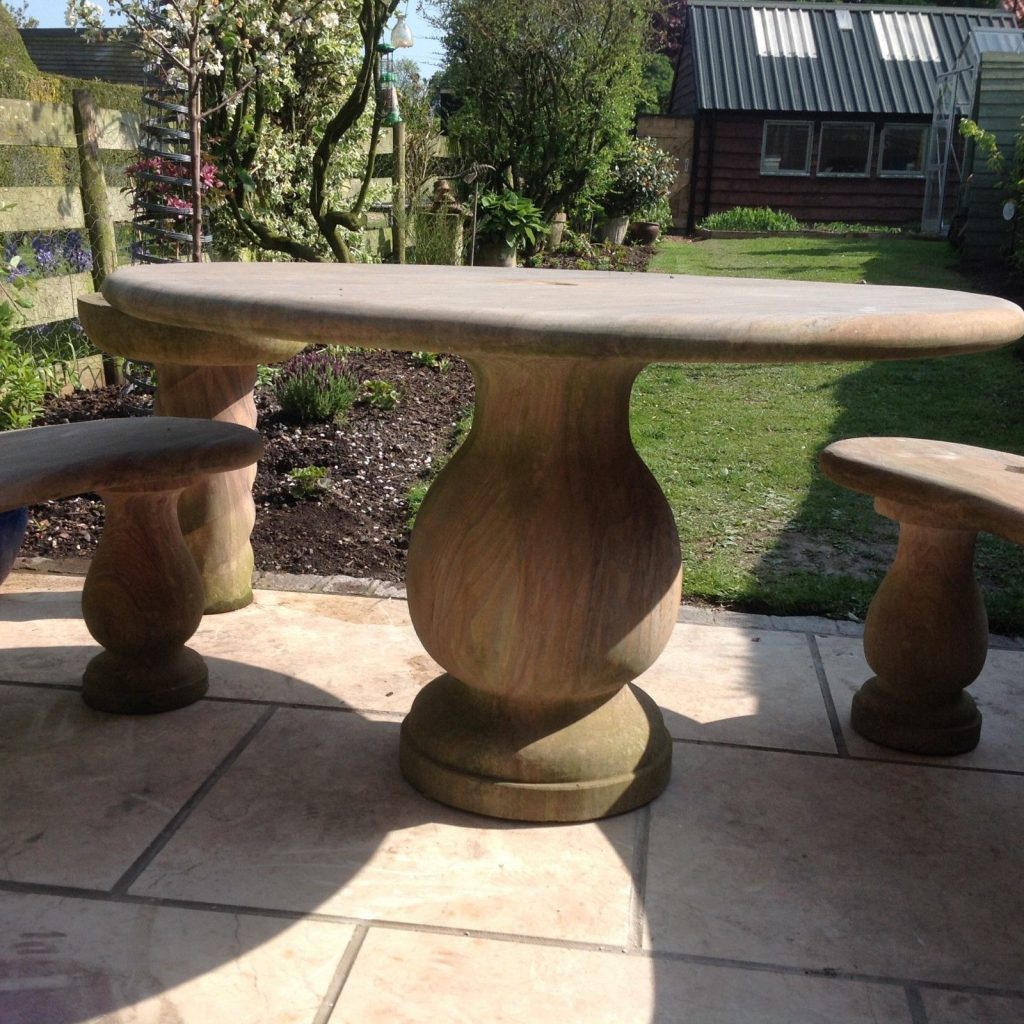 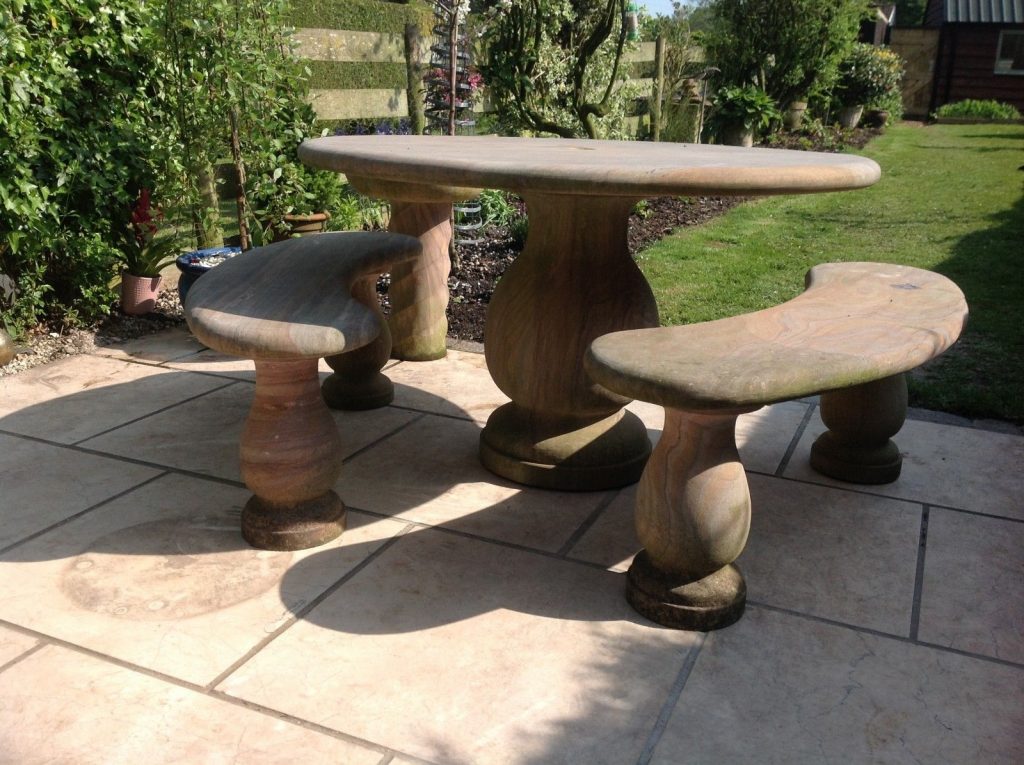 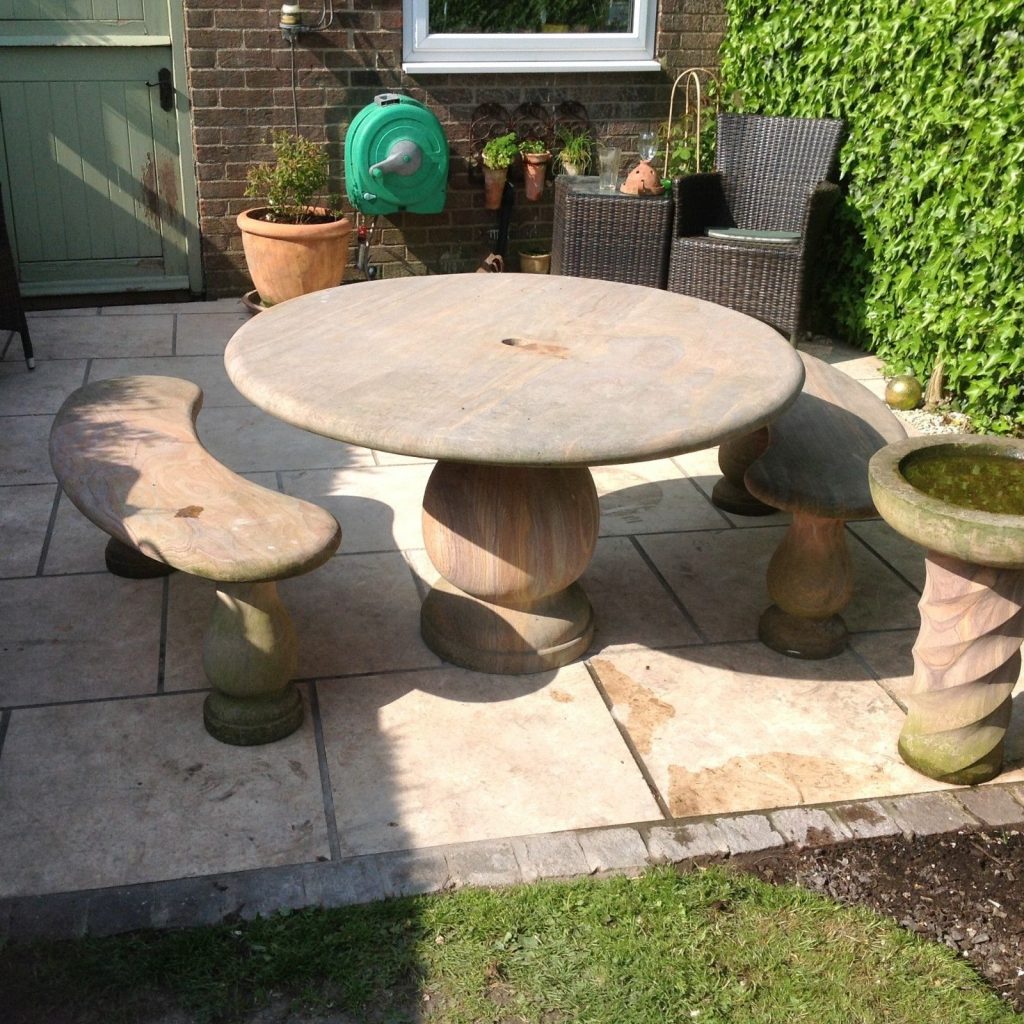 The idea was to hire a van, drive over pick up the table and be back all in the morning. Being a little worried about the weight of the table, I checked on the site where the table was for sale new. The table and three benches were listed as weighing 550kg.  We were only buying two benches and a table so it would be a bit lighter.  I guessed a bench would weigh about 120kg. That meant our two benches and table would weigh 430kg or nearly 68 stone!!! Impossible

Wait surely the benches and table are in bits. Each bench was made of two legs and top so 40kg a bit which is not out of our strength range. The table would obviously be heavier but again it came in two bits and we had managed to carry cast iron radiators into the house the biggest of which weighed 110kg so we would be okay, but I wasn’t looking forward to the challenge.

I rang round all the usual van hire people it should cost about £40 for the day but I hadn’t factored in that it was Bank Holiday. I thought this would mean there would be less demand it seemed last minute bank holiday van hire is a thing, there were no vans anywhere apart from a ridiculous £180 from Hertz.

Never mind I will get a quote from Anyvan they can pick it up. I love anyvan and ebay as all you do is put the item number into the quote and all the details are sent off and then the quotes come back in. I knew I would need a two man pick up and I wanted it all sorted Saturday morning so a timed delivery was required. Two man delivery and timed delivery both push the prices up as do weekend but I was delighted when they came back and said £70 (it is about 50 miles away from us). This brought the whole stone table and two benches delivered for a total cost of £200.

The guys picking up the table rang me at 7.30 on Sat morning. They were going to pick the table up and then deliver to me so expected to be with me by 8.30. I got another phone call ten minutes later

We have broken the table top, it was obviously faulty before. We were sliding it along the floor of the van and it just split into two bits. We are on our way back to you you can see it then

White with shock, what were we going to do with a broken table? I woke my husband to see what he thought.

why have YOU woken me up just to tell me YOU have bought a broken table. Send it back

He was no help. Desperately googling replacement stone table tops (£400 + vat from local quarry) I waited for the drivers to arrive. They were young, very strong and they obviously felt bad about the table top. But they also didn’t take responsibility. They said just pushing the table top shouldn’t make it split in two, it obviously had a fault seam in it. I gave them my best Paddington hard stare.

They then asked me if I knew how heavy the table and benches were, as they said they had struggled to carry them. I felt a bit guilty then, also the benches and table base were beautiful and worth £130 in themselves. They carried the broken table and benches into the garden, I signed the paperwork saying it wasn’t their fault and said thanks. 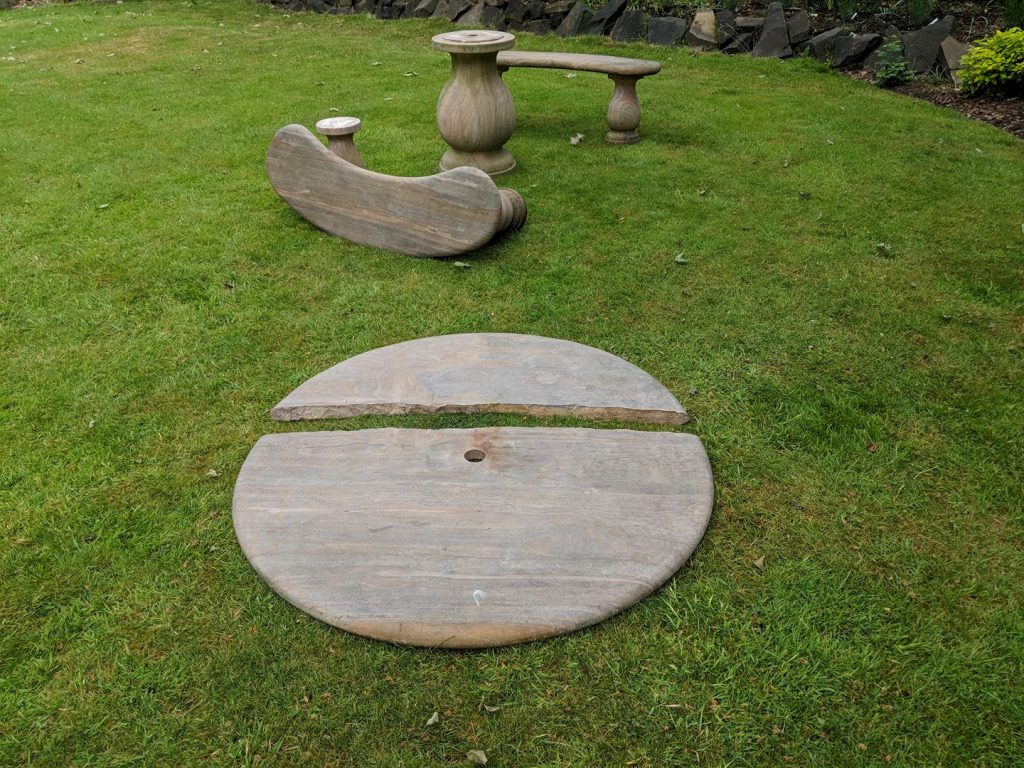 What were we going to do about the broken table top? I was furious, there wasn’t another table. I could refuse to pay the seller for it but the delivery drivers said it broke when they put it in the van so the seller wouldn’t be happy. I could have claimed against the van people but they would say the condition wasn’t good. Either way all I would get was a load of grief and my money back and no table. I loved the table. It looked perfect with the hoops and the house. Surely we could fix it.

We bought some epoxy and glued the table back together. It worked, there was a nasty crack but the table was solid.

Take a sad song and make it better

The next day our plumber Dave was round (doing the downstairs loo). I told him the story about the table. Dave loves to buy and sell on ebay too and we often share tales of bargains. The ones that got away and the odd disaster. I told him I hadn’t left the seller feedback and wasn’t sure what to say.

Tell them that the table is perfect and that it was an absolute bargain.

If they are genuine people and it was the delivery people who broke it they will be pleased that you are happy. BUT if they sold you a duff knowing it would break then they will be annoyed that you say it is perfect and a bargain. Either way you win and the table looks great.

This made me feel happier with everyone. The delivery drivers had broken the table but they had carried it back and forth and it weighed 450kg, so they were forgiven. The table is sandstone so does have hairline faults, the previous owners probably knew this. We got a beautiful stone table and two benches for £130! It also allowed me to try out another experiment.

The Japanese art of kintsugi teaches that broken objects are not something to hide but to display with pride – Nothing is ever truly broken. They use gold to make the object even more beautiful 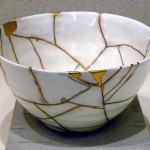 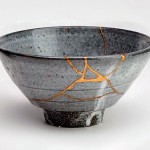 Kintsugi fits in with our ideas of repairing the house.  Sometimes showing the scars that life has thrown at the house rather than covering them up, makes things more beautiful. The table was safely jointed together with epoxy. However, there was a seam and little chips where the stone had split away. 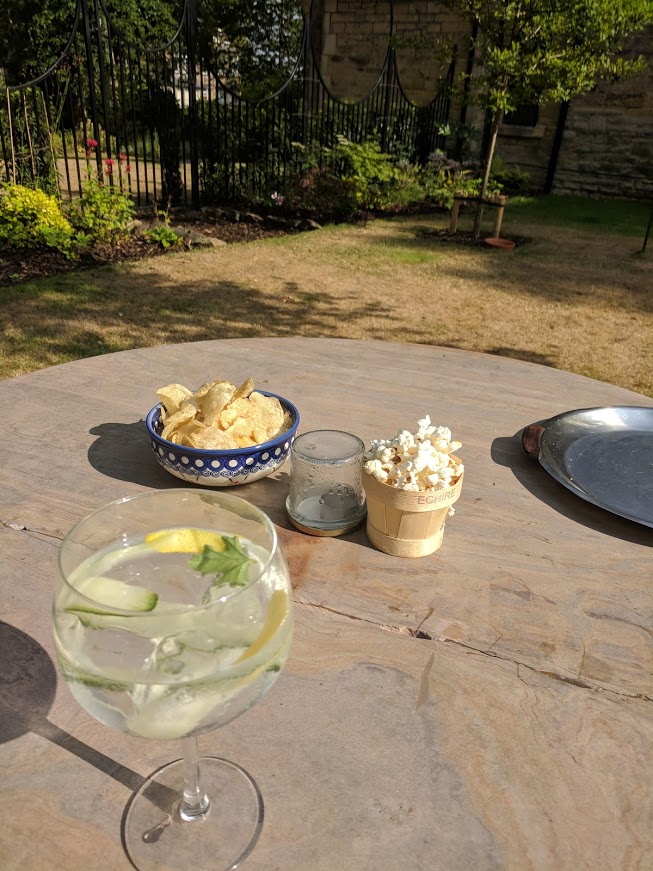 We decided that gold would be far too costly to fill this large crack. Lead from the house was another consideration, as we have lots of old lead plumbing pipes that have been removed. We were a bit apprehensive of melting lead and then pouring it accurately or safely (surely the fumes are not good for you) . In the end, we thought we would try solder. We dripped the solder into the cracks and then sanded the seam with an orbital sander. It was a slow methodical process.

The table now bears its scar proudly and perhaps looks more beautiful for it. 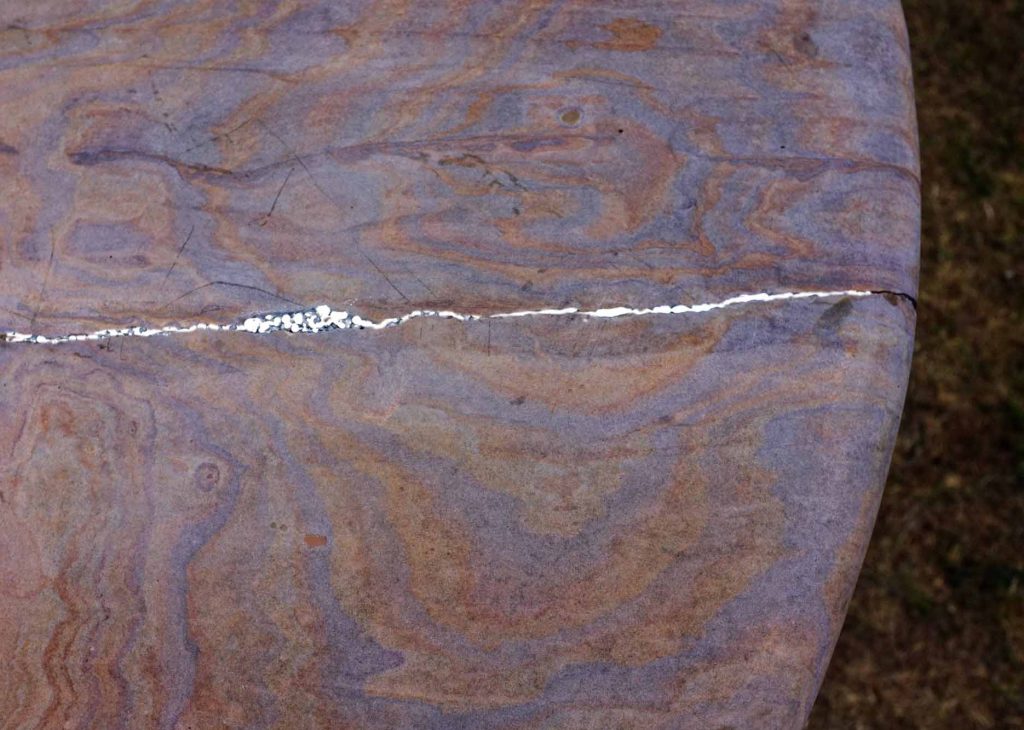 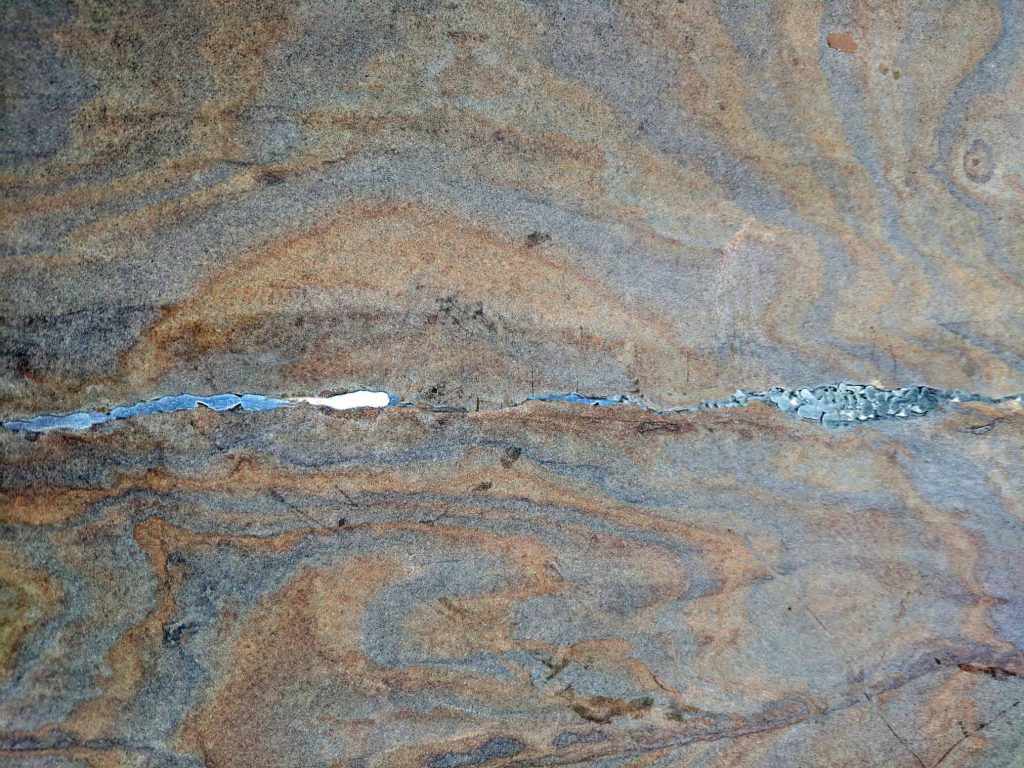 It isn’t perfect but who wants perfection. It is our perfect table