The garden was coming together but we needed to crack on and get some hard landscaping in. Once we had made the decision to divide the garden, we knew there was only one material that would work for us, RAILINGS.

Railings manage to be both strong and imposing whilst also being light and gentle. They don’t rust, they allow hedgehogs and other animals to pass between but stop the dog (and any casual burglar), they don’t block the light but they disrupt the view of behind. We love railings.

When we moved in we needed to get the 75m perimeter a barrier and this is when we first met Ricky Railings. His name is Richard and he installs Railings so that is what I call him. Ricky loves old buildings but on the whole all he does is install security gates and entrance systems.  He couldn’t believe we needed more railings as he has already done so much work for us. He came round to measure up.

What are you thinking he asked.

Giant hoops in the middle of the garden. We want scooped railings with sweeping high hoops on top to create giant 3m circles, in different sizes and a gate. can you do it?

After accusing me of being on the “wacky Baccy” he said course we can do it we can do anything. just give me a drawing. So we did

The idea with the hoops is to frame views of the garden, they have been designed to give views of specimen trees in the garden. They are asymmetrical to reflect the Arts and Craft architecture of the house (nothing symmetrical in our house). They will be fronted with Portuguese laurel hedging on one side and flower beds and climbing roses on the other.

We were inspired by the gardens of the Villa Reale di Marlia near Lucca in Italy, where among many other things we spotted this hedge with built-in circles covered in climbing plants. We thought ‘Bingo!’, that’s exactly what we need to do – a barrier that you can look through. 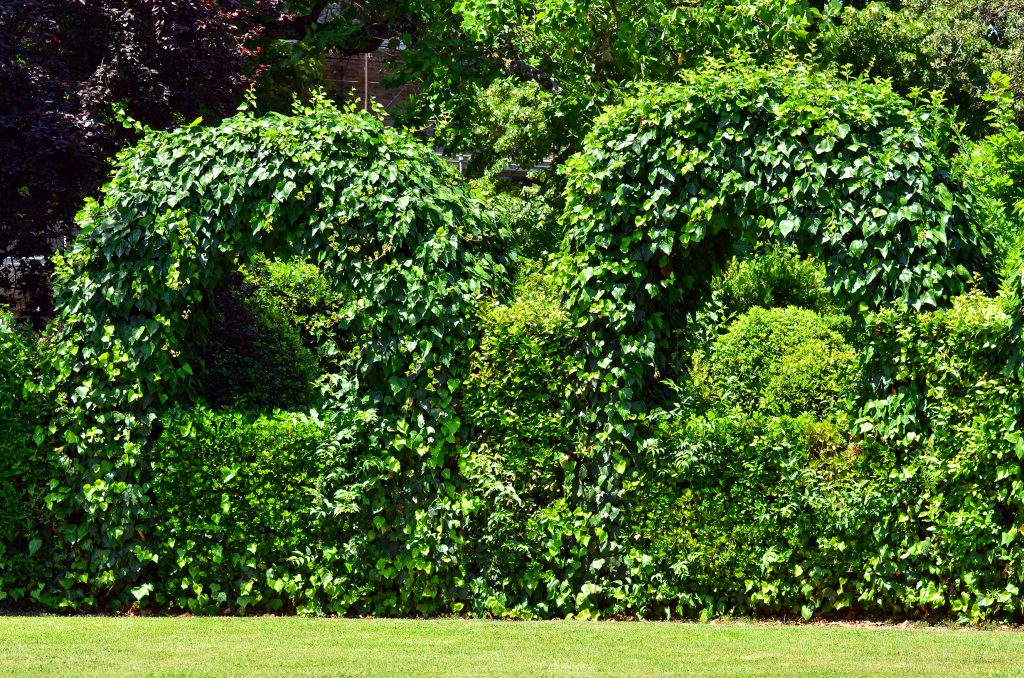 In hindsight we also discovered this illustration in The Arts and Craft Garden, which must have subliminally influenced us! 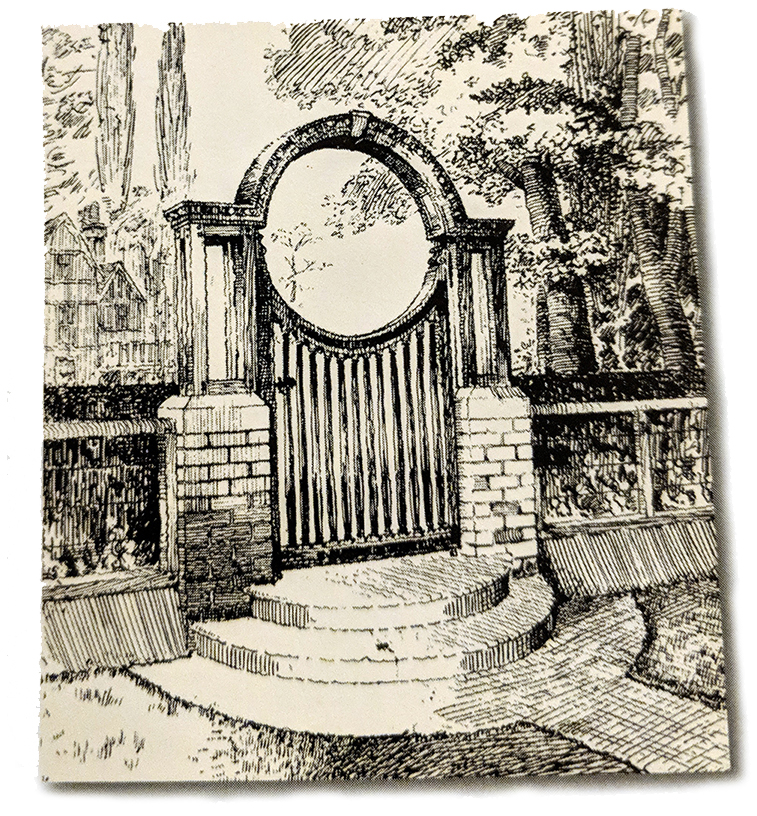 The gate above is cited as being from another book called The Art and Craft of Garden Making, T. Mawson, 1900.  So a relevant design motif in keeping with the house, but in no way a pastiche in the way we have executed the design?

After having a think Ricky came back and said there was a problem. Roughly our railings around the house are costed on £100m. This time we needed 16.5m so £1650 plus a gate.  To do the scoops would cost us loads more as it is more man hours in cutting shorter lengths and creating the curve, it would increase the cost by a 1/3rd.  Instead he said if we kept the hoops but made the railings one straight length then we keep the cost including gate to under £2000. Obviously we were sad but we are not made of money so compromises have to be made. He also told us that there was a 3 month back log but they will be in for Christmas, reluctantly we agreed to his terms.

He missed the Christmas deadline  I kept ringing and chasing, he had problems getting a powder coating room big enough to hold the railings. We were getting anxious, were these railings going to just look wrong? why were we so sure 3m high railings would be a good idea, surely it would look like a playground.

I’ll drop them off tomorrow and install them monday.

Finally nearly four months later we would get to look at them, when they arrived they were scooped out just as per the drawing. I asked Ricky how come and he said the guy who makes the railings was so keen to do something different they decided to just go ahead and do them at the lower cost but with full circles. They look fantastic and Ricky loved doing them they were such a challenge.

Are you a lion tamer

When the first sections went in they looked massive. They had to be firmly cemented in and propped whilst the cement went off, and only when that section was stable could the next section be attached. The whole process took a couple of weeks. 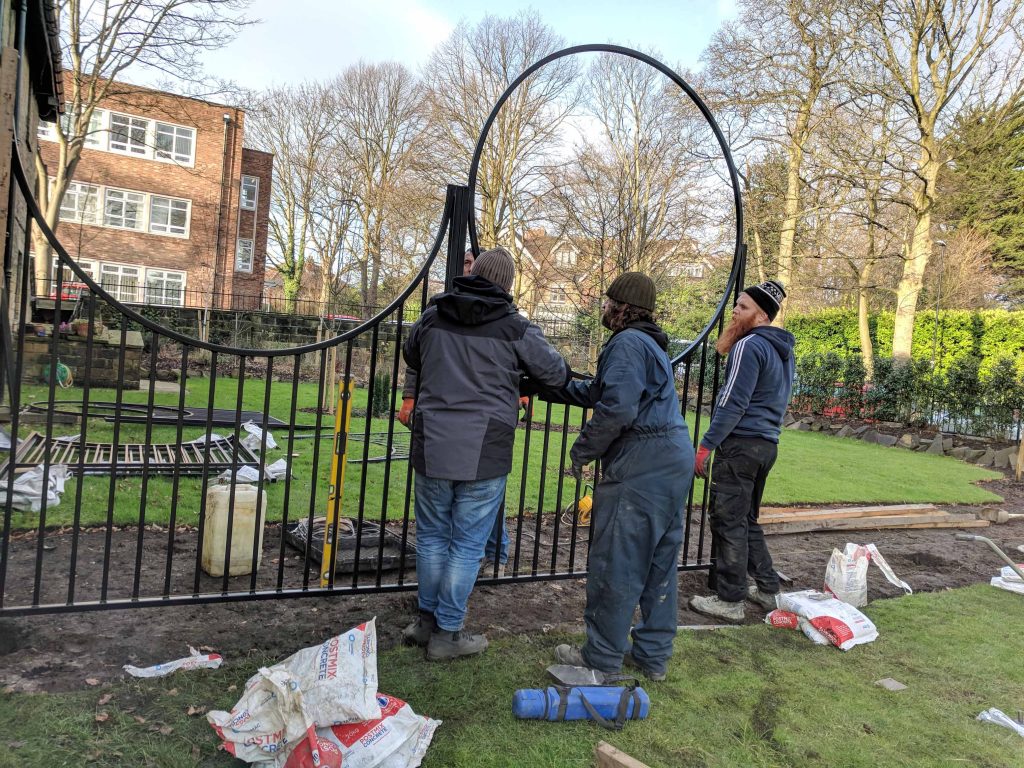 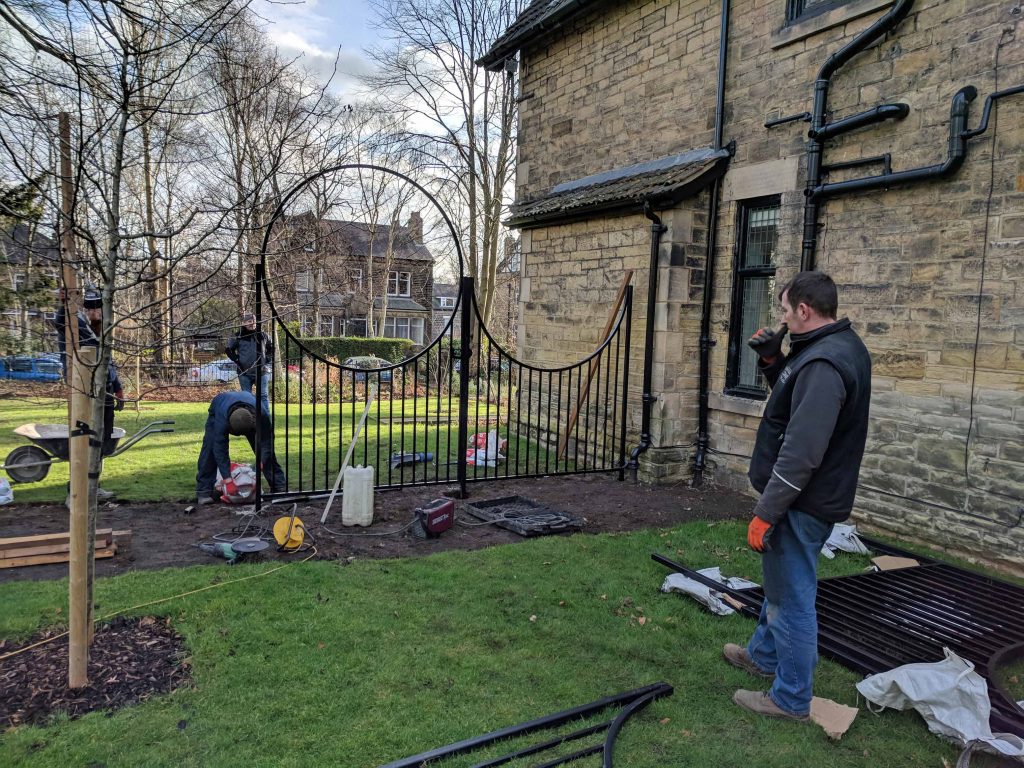 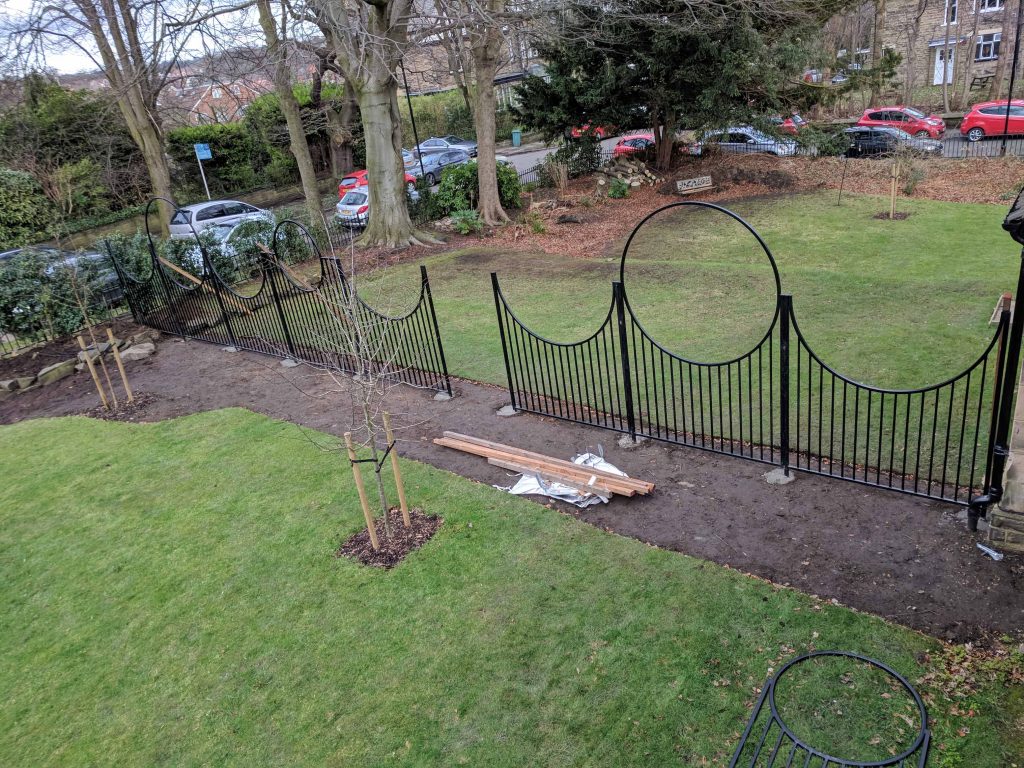 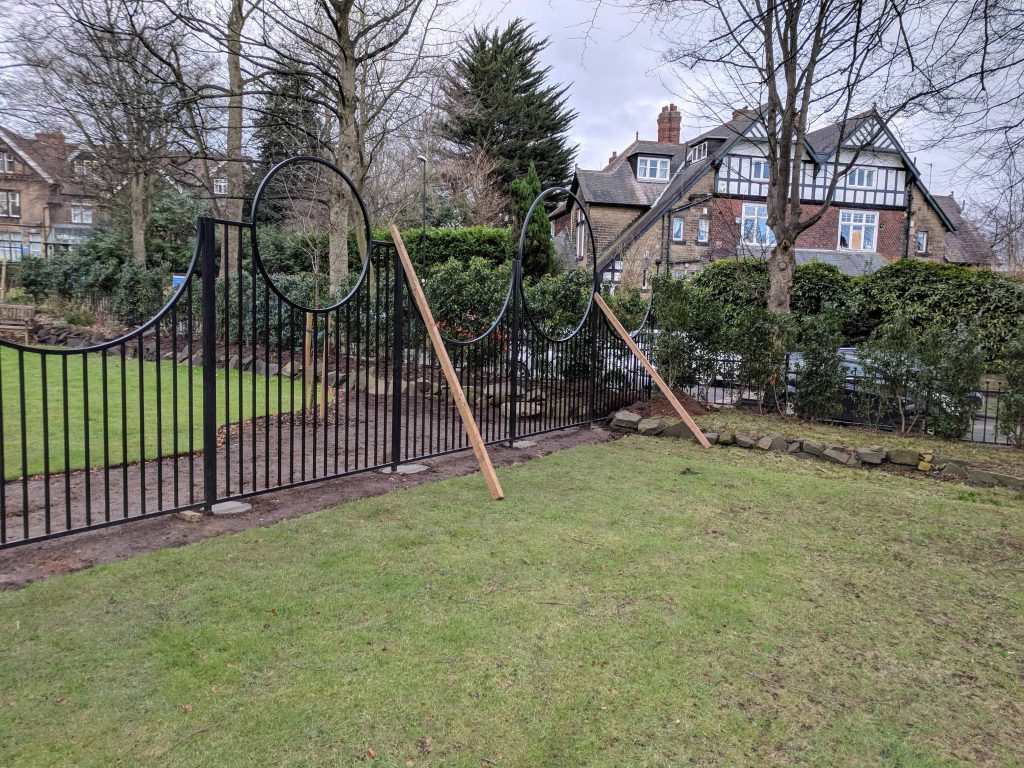 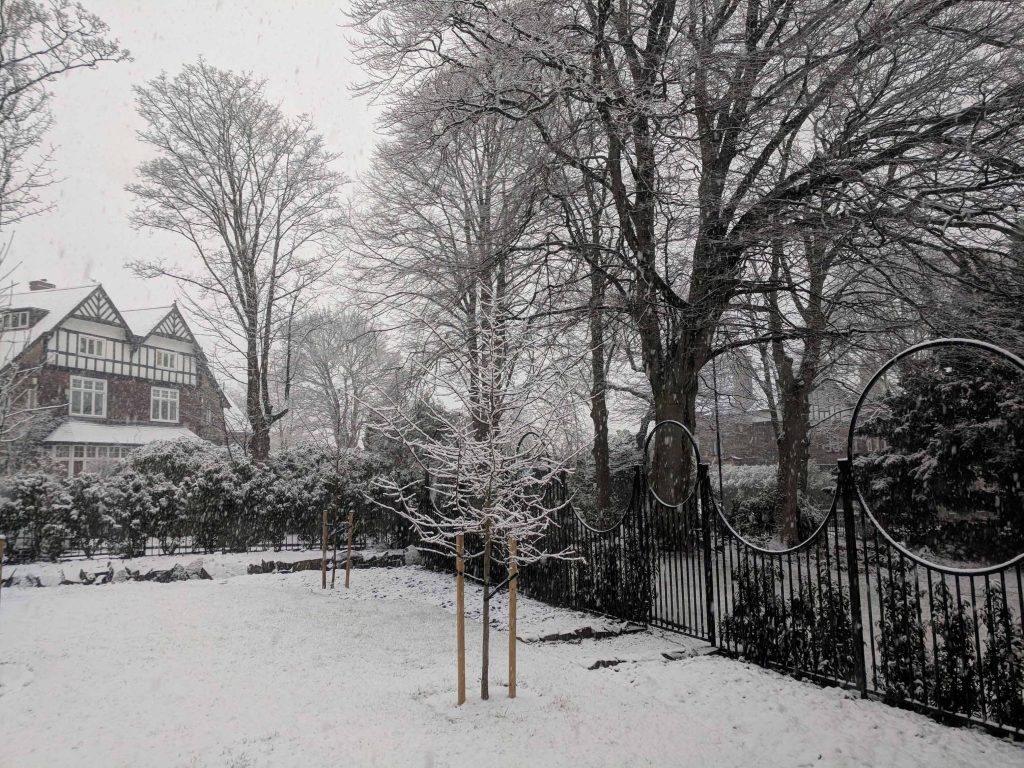 They have settled into the landscape and the neighbours have all said how much they like them. The thing that we love most about them is that they are such a statement but also just disappear.

If you look at the photo at the top of the post carefully you will see the railings are there standing proud in the snow, but you have to look hard.