We were relieved when we moved in that the bathroom worked. It had a bath a shower, a sink and of course a toilet, phew. But on closer inspection it was really badly fitted (massive 2cm deep patches of silicon) the shower had no pressure and it was leaking out of the valve, the space planning was difficult.

Last year we began planning and thinking about the bathroom whilst getting on with other projects, have a read here , the biggest revelation was to design the space like a Japanese Bathroom. They manage to squeeze everything into tiny spaces whilst still retaining a feel of space and tranquillity (lets hope we manage this too)

The bathroom walls were covered in gloss painted woodchip, just that bit harder for the steamer to penetrate, they had also put woodchip on the ceiling. The bathroom looks okay in this photo but then you notice the pelmet, the fan with trunking, the bad plumbing, the rusty radiator and the bad space planning. 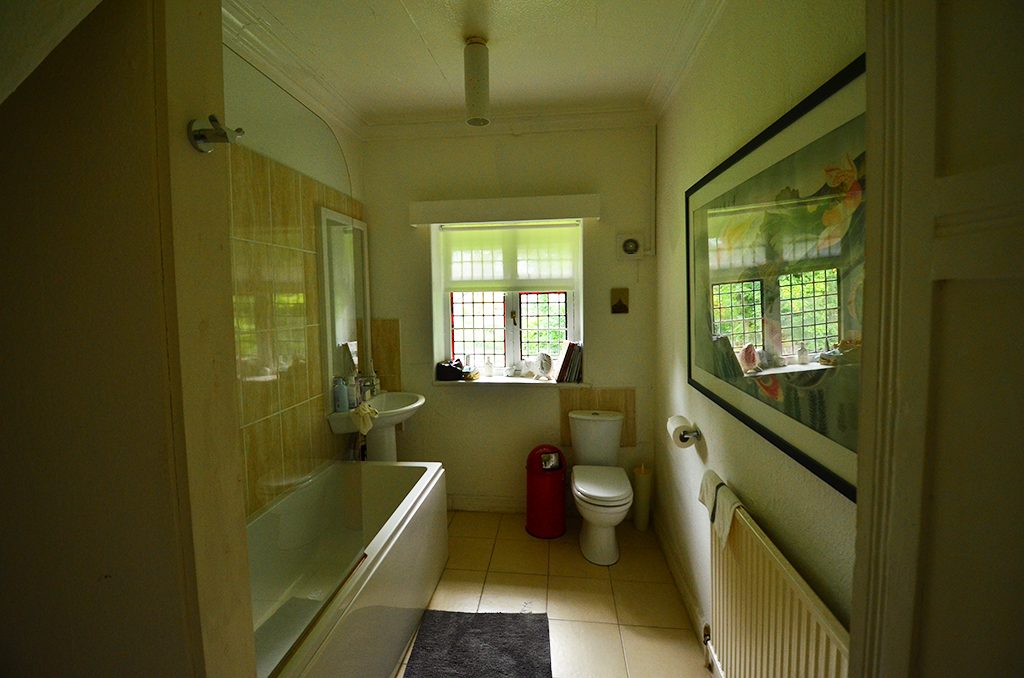 As always with a renovation the real horror shots are during, people are shocked at how it looks with the tiles ripped up and the walls stripped of their magnolia gloss woodchip. This is a horror bathroom 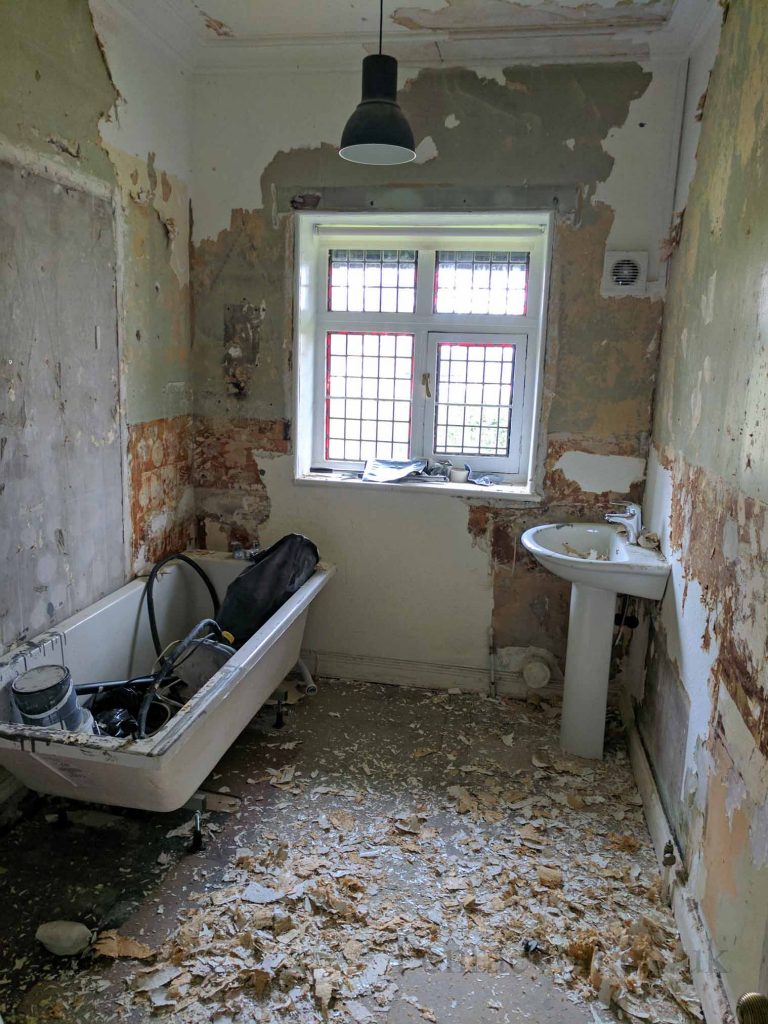 We discovered a few things, including a plastered up doorway and an old vent which had been papered over and the hearth for a fire which had been blocked up. 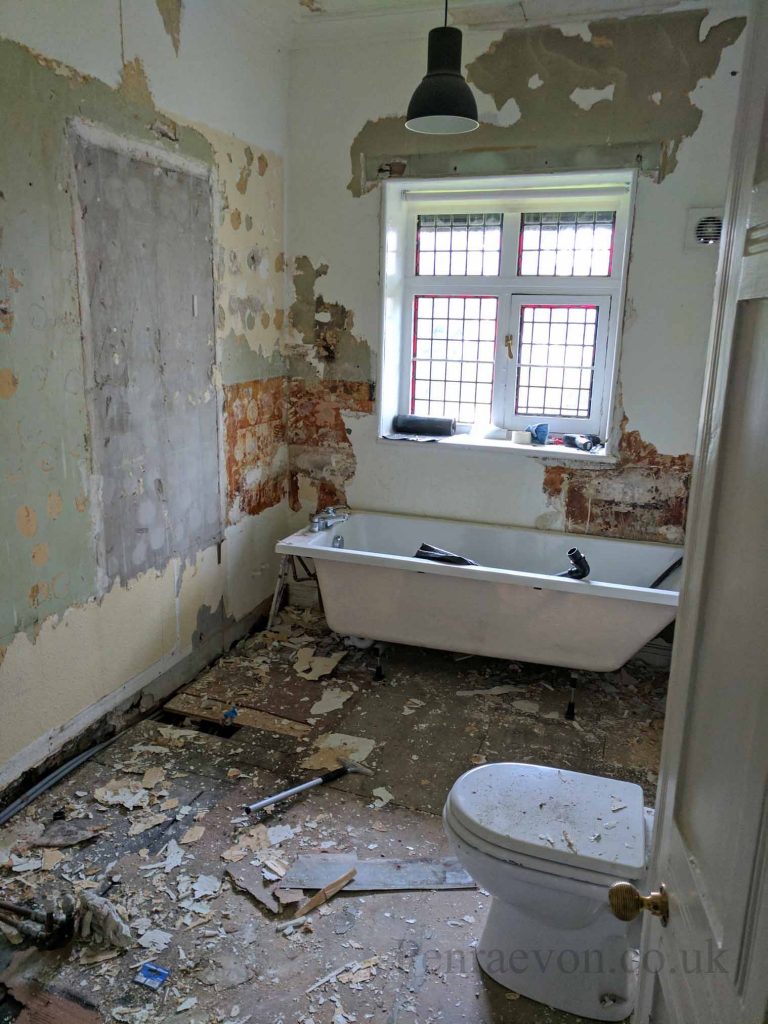 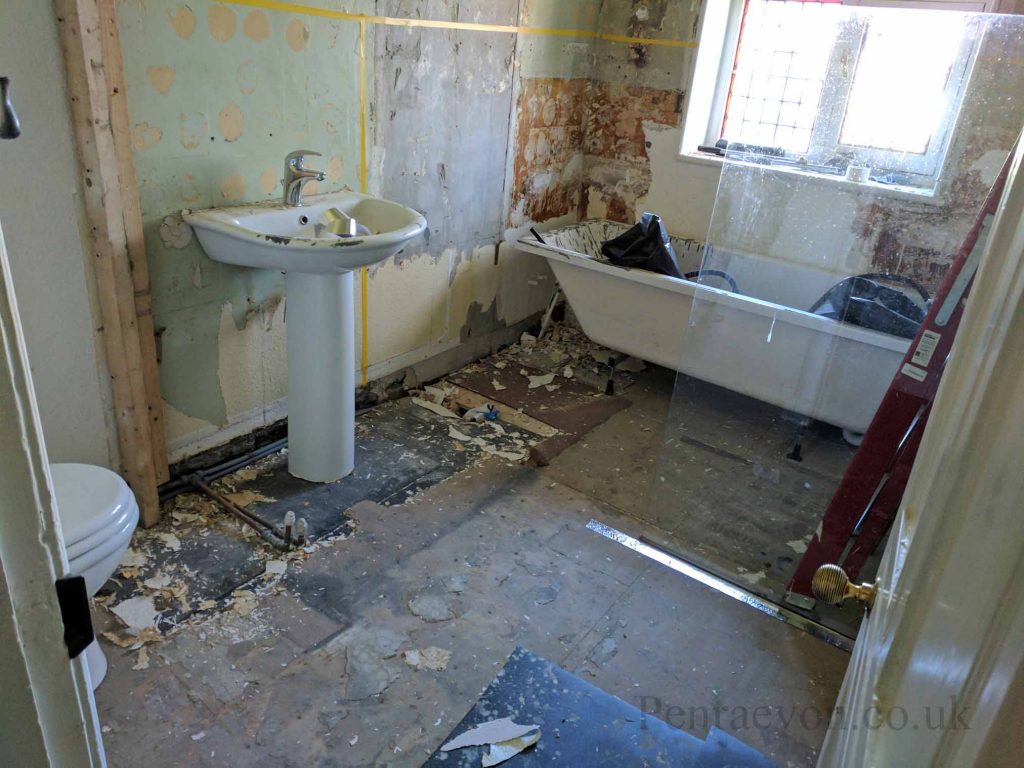 One good thing whilst we were stripping the room back was the opportunity to try the bathroom in different positions. We had got the plumber to disconnect all the services leaving us to clear them all away. The photo above shows our final decision for layout of the bathroom, with the toilet tucked under the stair well. This does cause a problem with the waste which normally would go under the floor but because of the hearth it can’t, unless we remove the hearth which we don’t want to, so will be boxed in.  With every design there is a complication and a compromise. 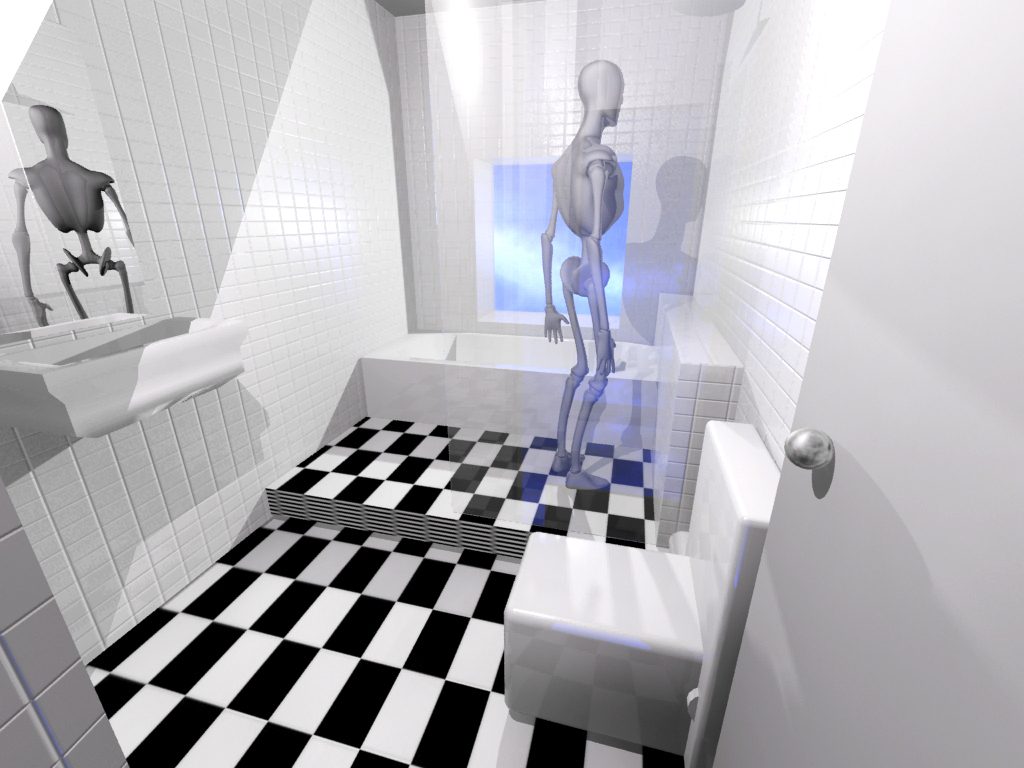 The picture above was our attempt at space planning and also to help us agree between ourselves on the layout. It is quite an unusual layout and is inspired by Japanese Bathrooms. Check out my pinterest House bathroom board. 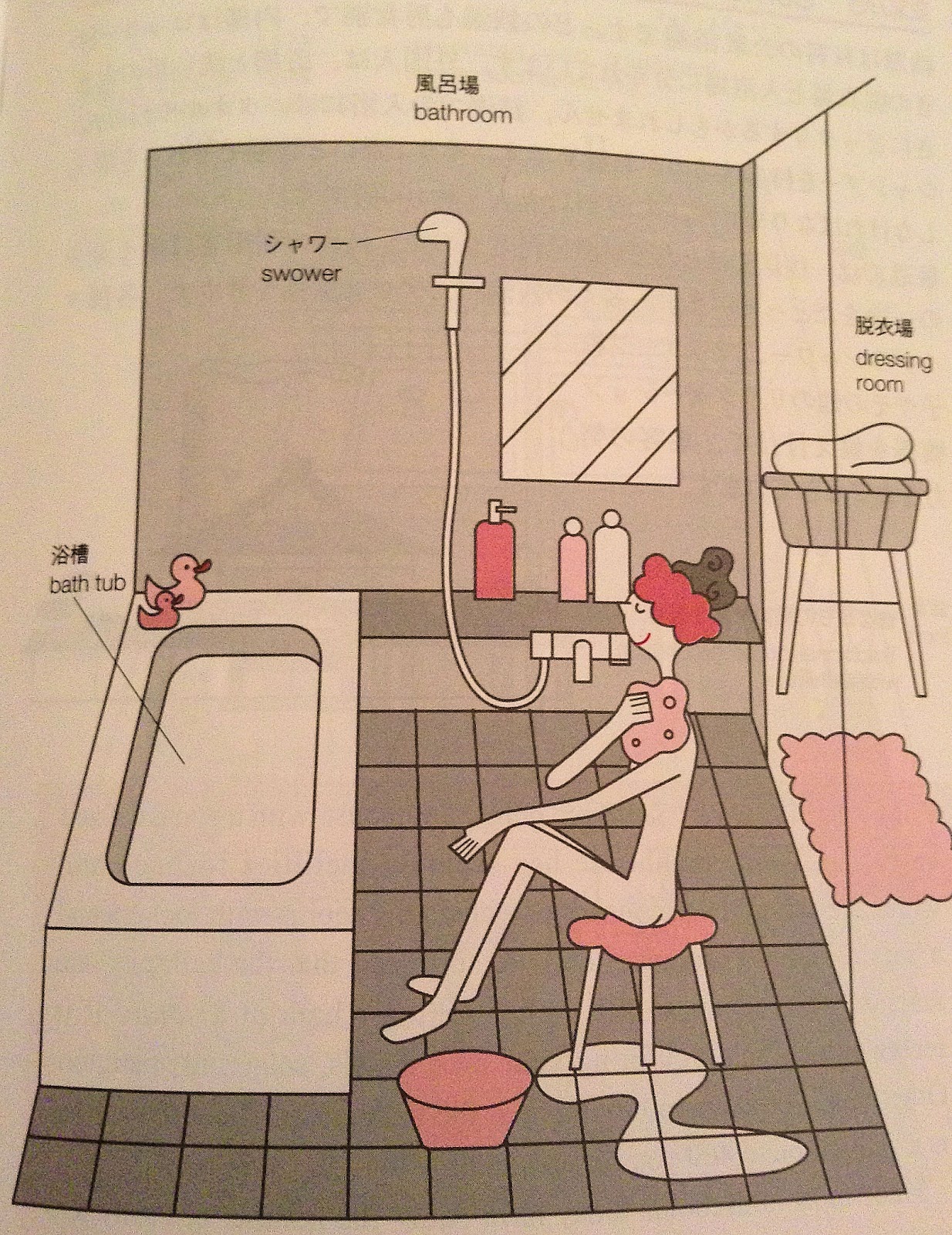 The colour scheme will be neutral but warm. It is a North facing room and we get added interest with the red stained glass glowing through.  The walls and ceiling will be dry-stonewall (a neutral stone colour which looks off white in a period property) with a 400% tint in eggshell for the woodwork (we call this colour Penraevon and is a warm grey, we use it throughout the house) These are both by Hicks and Wetherburn. The window frame will be in Oil eggshell in a 25% tint of Dry-stonewall to give a soft white (this was made up specifically at a Johnstones trade store).

Oil eggshell will be used on the window as it will come into contact with more water and also it was previously painted in oil gloss many times. Remember with paint when repainting old surfaces,  oil on water fine, water on water fine, oil on oil fine water on oil fail. If you are not sure if your paint is water or oil just see how it tells you to clean the brush (in water or solvent). Old gloss paint will be oil based and emulsion will be water.

For tiles we finally settled on real Carrara marble. We were surprised that if we got smaller tiles 30cm x 30cm then the price was the same if not less than ceramic marble copies (we paid £35sqm) obviously the bigger the tiles the more expensive. We are tilling one wall in marble and carrying this round all the wet area at dado level height.

Once we step out of the wet area we will change the tiling to wainscot to tie in the underneath of the stairs which are tongue and groove boards. When the tiler came to see the space he advised us to get marble pencil strips to fix the edge of the marble to the start of the wainscot. We also decided to buy marble ogee to put on the top of the dado. 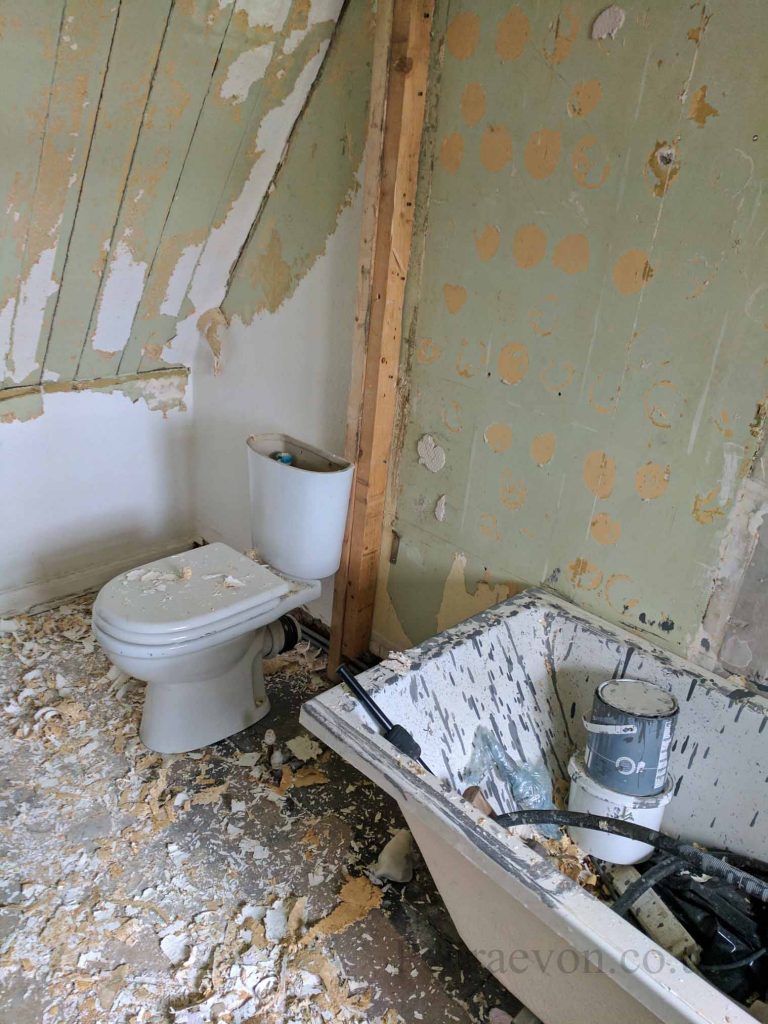 You can see where we tile and wainscot in yellow tape in the photo below. 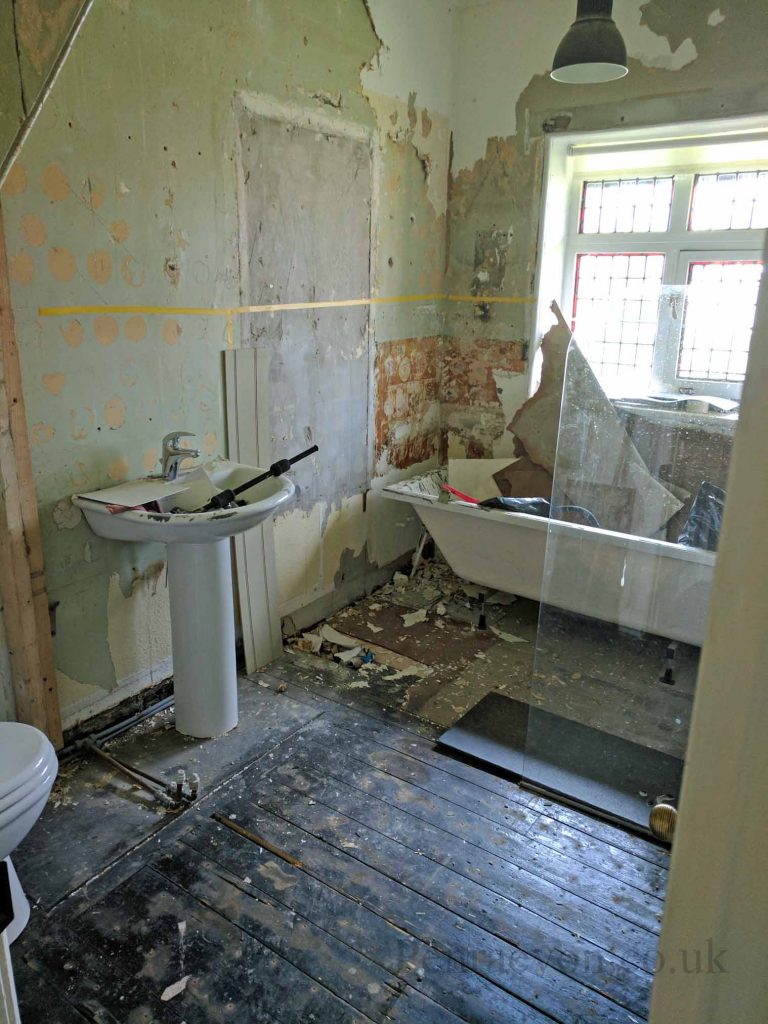 After considering many options we decided to go with painted floorboards. Part of having an old house is showing the changes and we were delighted to discover the hearth for an old forgotten fireplace, we wanted this to be a feature in the new bathroom. The floorboards are going to repaired and repainted to match the colour of the shower tray (charcoal grey). Hopefully this will make the space look less crowded.

Here is the bathroom halfway through being painted so it looks a bit patchy! 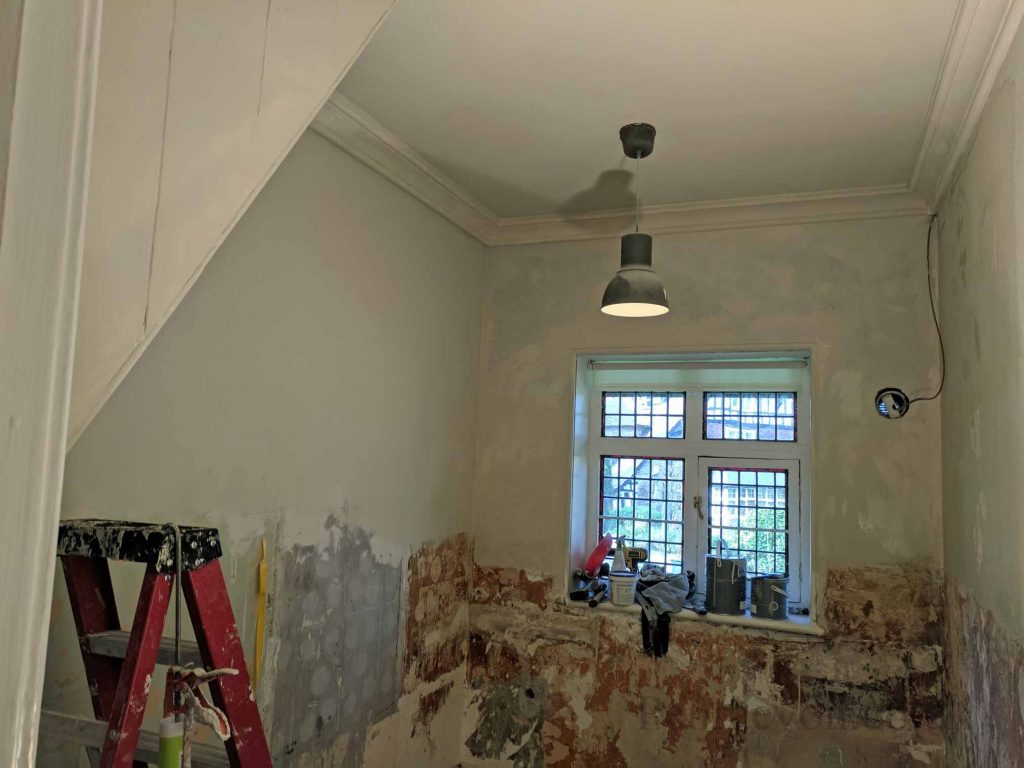 and in the other direction. (where you can still see woodchip it will be covered in wainscot, tongue and groove. Never do more work than you have too! ) 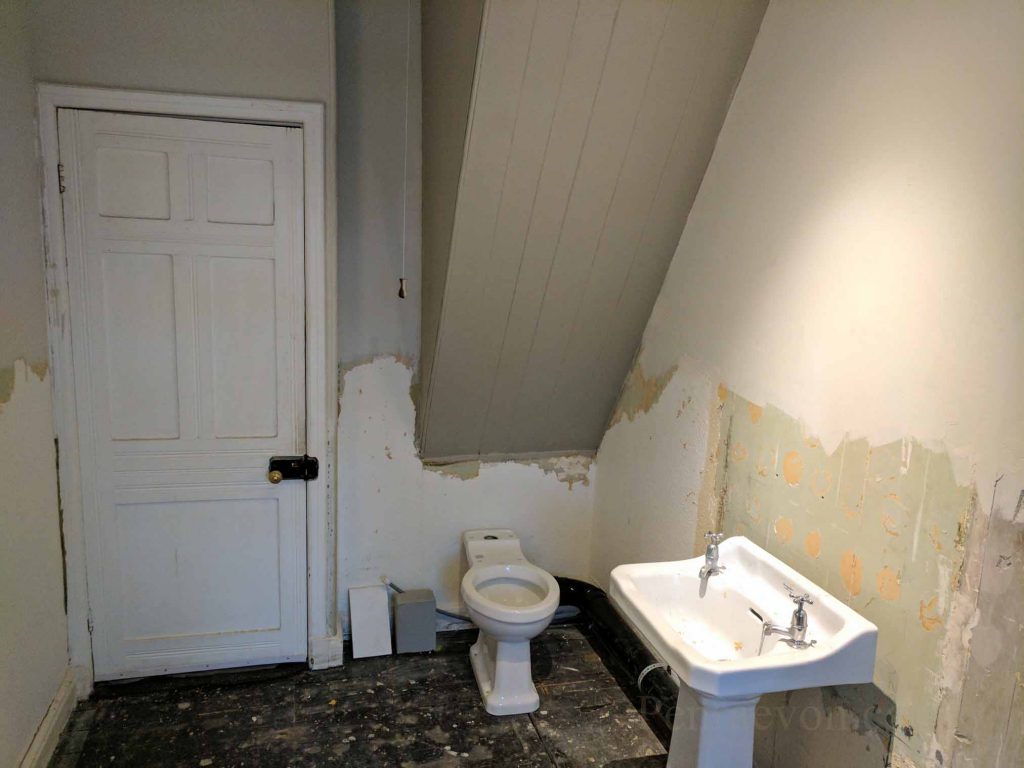 With the most stressful but fun decisions made, it was time to go shopping.  Our last bathroom was bought from Sanctuary Bathroom in Leeds (read more here about the en suite). The items had been narrowed down by looking online and then price checked on google and ebay for the best prices. Quality but at the best price.

A large bath was a must but we only chose built in as it was easier to seal in and make watertight next to the shower. After a long search we finally discovered a bath which was both long but also narrow.  The bath is 1800 long but only 725 wide as we wanted to keep it as slim as possible (most 1800mm long baths are 800mm wide, standard UK bath size is 1700 x 700. This bath also comes in six other sizes) it is a clean shape single ended and made by Carron. We bought a steel double ended bath in our last house and it was a bad decision (two sloping sides means that you can’t stretch your legs out) though the steel kept a beautiful finish it did also get cold quickly, so if you like a long soak it is worth bearing in mind.

We opted to go for the Carronite lining which makes the bath thicker and retains heat longer (advice from the plumber said get the best you can afford) . The shower tray is then going next to it. We managed to get a charcoal shower tray which was 1800 long by 800 (again this is slightly slimmer than the standard of 900mm) we might cut this down to make it slimmer (we checked with the manufacturer and it is possible to cut).

The shower screen is a frameless screen and will hopefully look invisible. The toilet and basin are both Burlington as we liked the design, quality and price. We managed to get them both for just over £300.

The taps are all Hudson Reed Topaz crosshead design, a traditional tap design.

The whole bathroom has cost us £1200 but we have gone for quality and would normally have been double.  The radiator is the same as  we have bought before, a cast iron reproduction gunmetal. Three column and six section, read more here 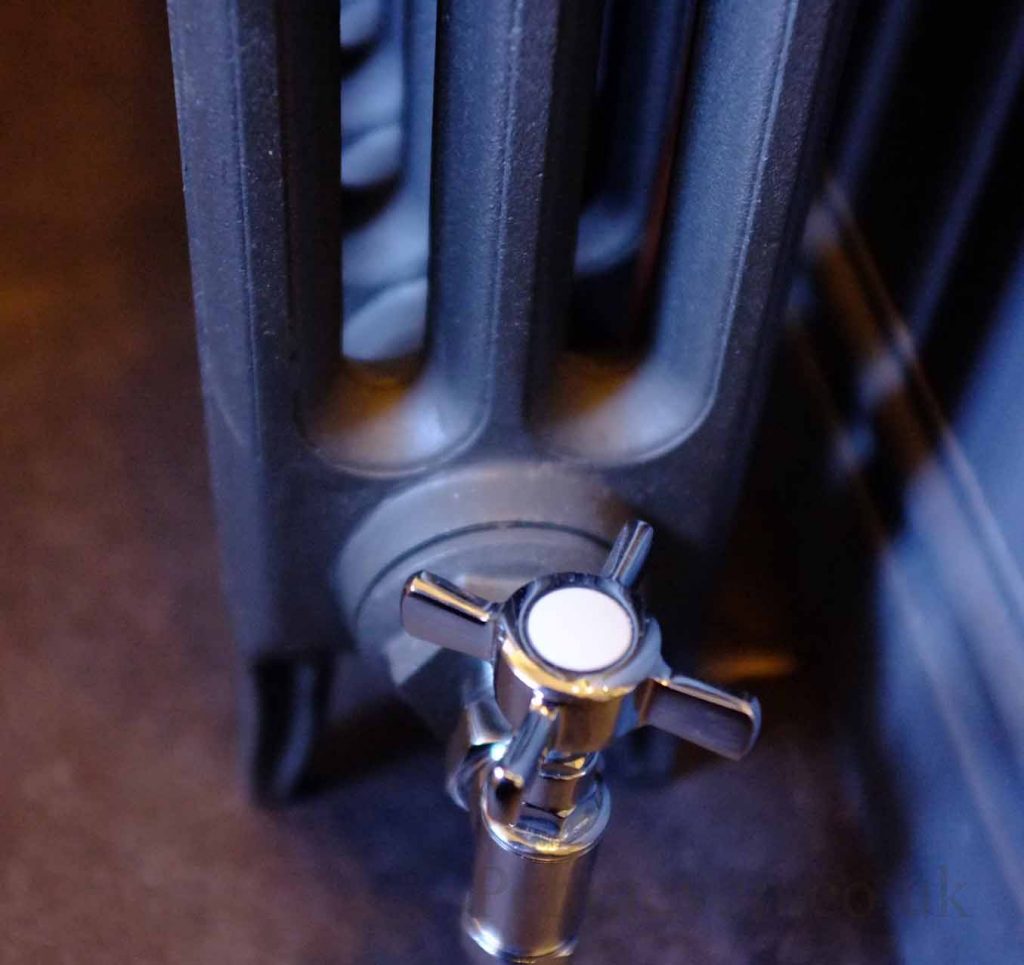 The whole bathroom including tiles and trades, we expect, to come in at £2500.

All decisions have been made the plumber and the tiler booked, it should all be finished next month. Watch this space for the next update.