En Suite, I hate that name. We keep calling it the bathroom but then people think we mean the house bathroom, anyway I digress. We have split the room into a Dressing Room and En Suite, and after many discussions and making Paul watch Youtube videos on how to build a stud wall we have begun the divide. You can see below the chimney breast (where some plaster has fallen off, shows how long ago it was blocked up, as they used lath and lime plaster) and the original service void that runs from the attic down to the kitchen.  This contained an assortment of lead pipes, copper pipes and random wiring – most of which isn’t used any more. 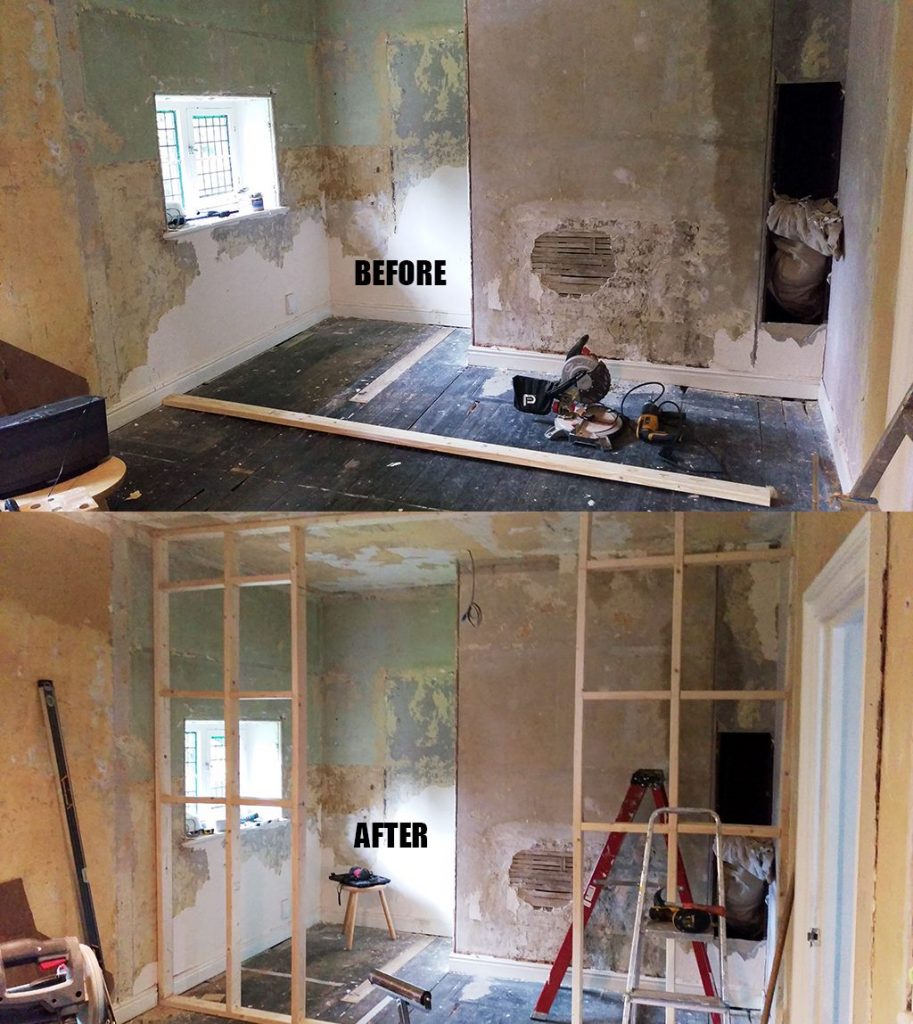 Interestingly, when we stripped all the woodchip from the walls, we uncovered that this room had previously been two rooms. We did have our suspicions as it had two fireplaces (one at either end), but we couldn’t work out where the extra doorway would have been. 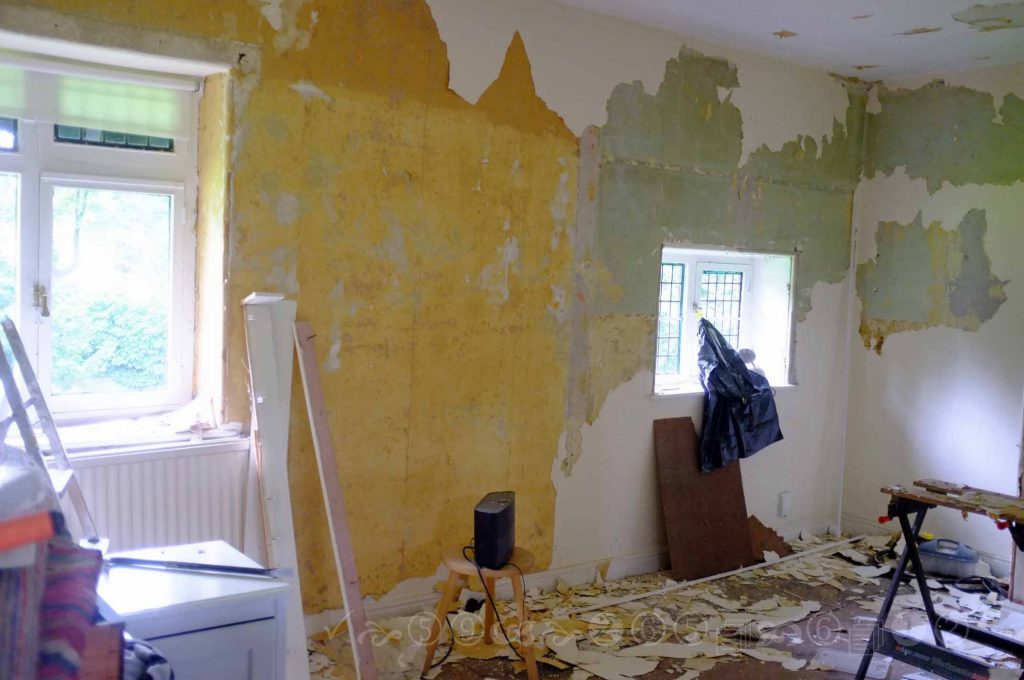 All became clear when we uncovered a plastered up doorway which would have led into what is now the bathroom (I mean the house bathroom, next door).  Also note the line on the left hand wall (and change of paint colour) where a previous stud wall has been. 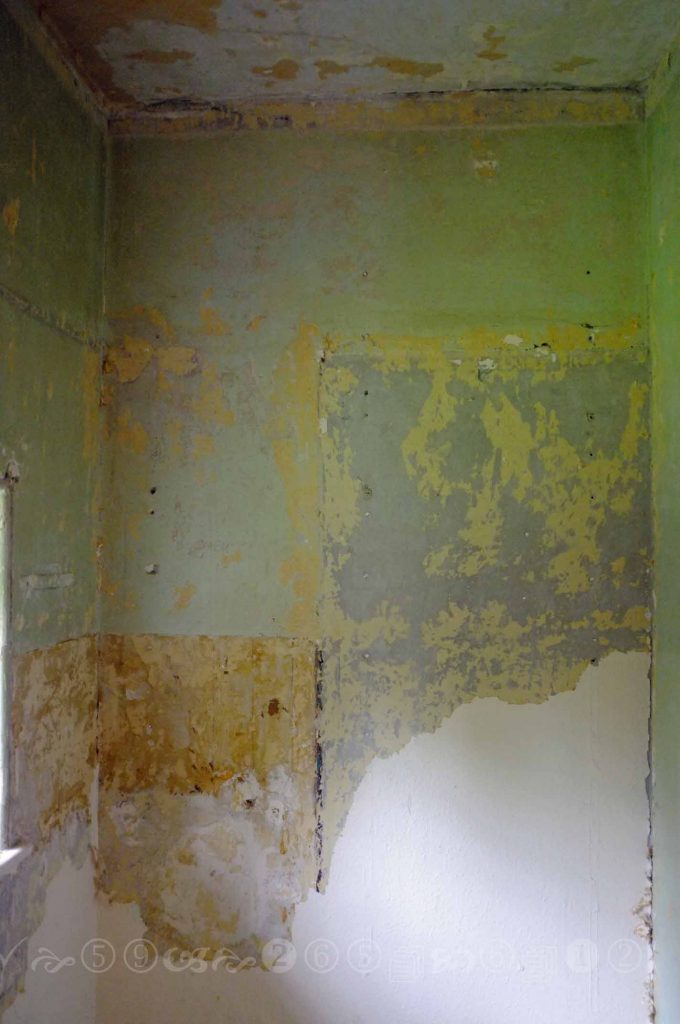 Once the dividing wall was up we boarded the shower end with aqua panel and put in a little alcove in the existing void and sealed all the corners with wetroom rubber kit. 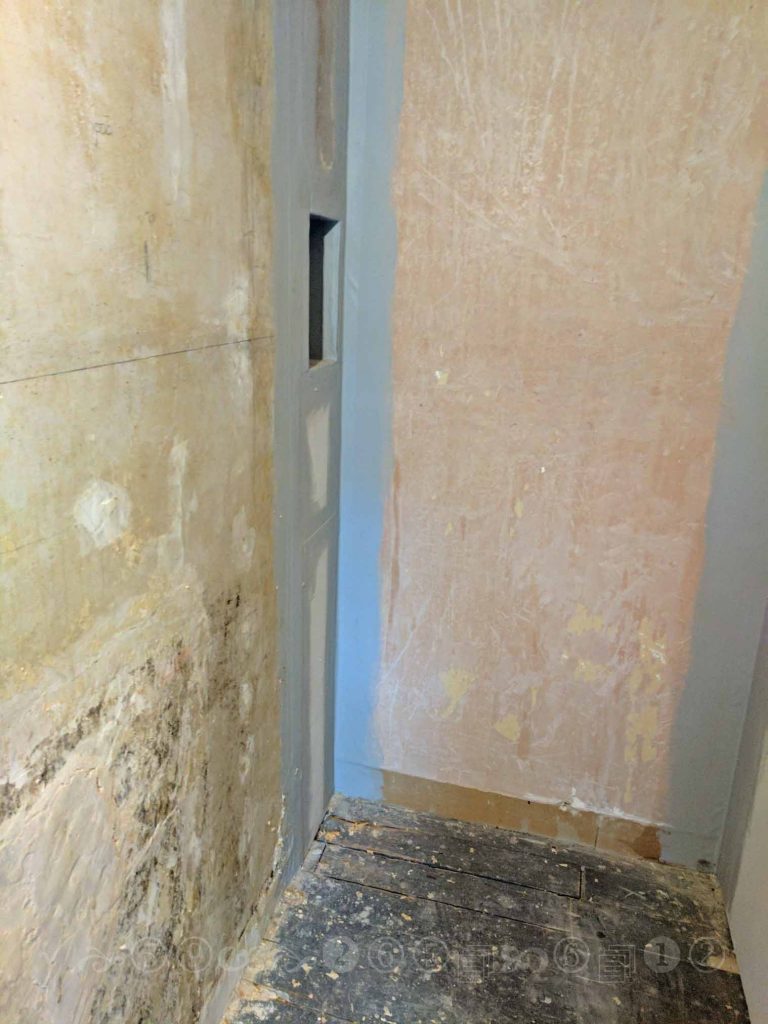 The room is L shaped and measures 370cm long and 180 cm wide (at widest point). The shower is at one end 1m by 1m which should be more than enough.  The size was dictated by locating the stud wall on top of a floor joist, which is the correct way to build a stud wall for maximum strength.

Here’s another shot showing the whole room with the stud wall up: 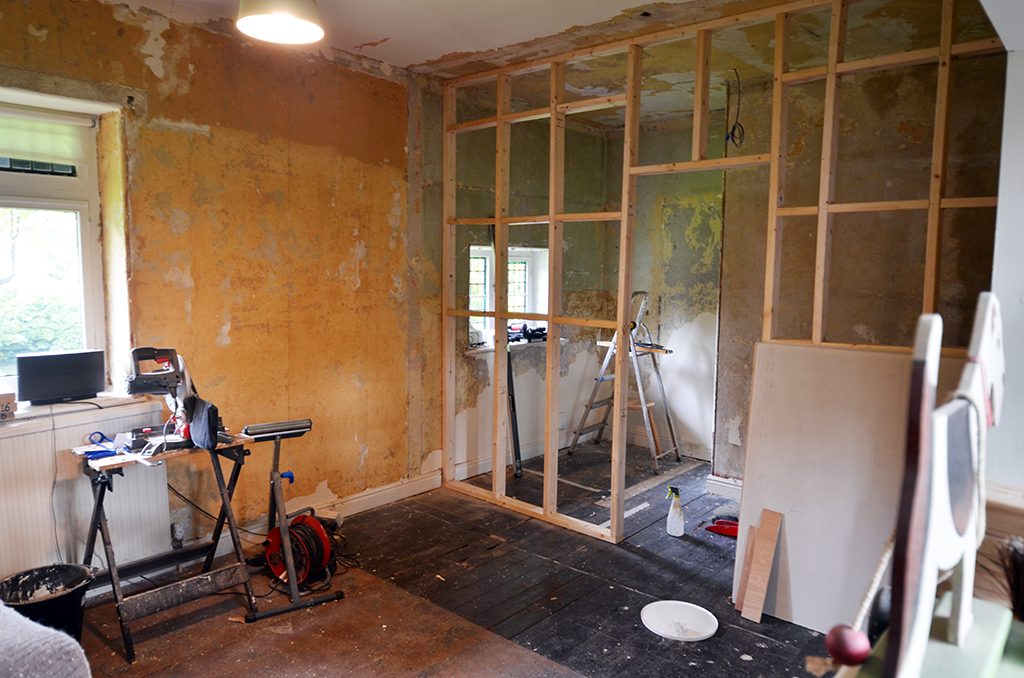 And finally boarded, taped and jointed (After the plumber had finished!): 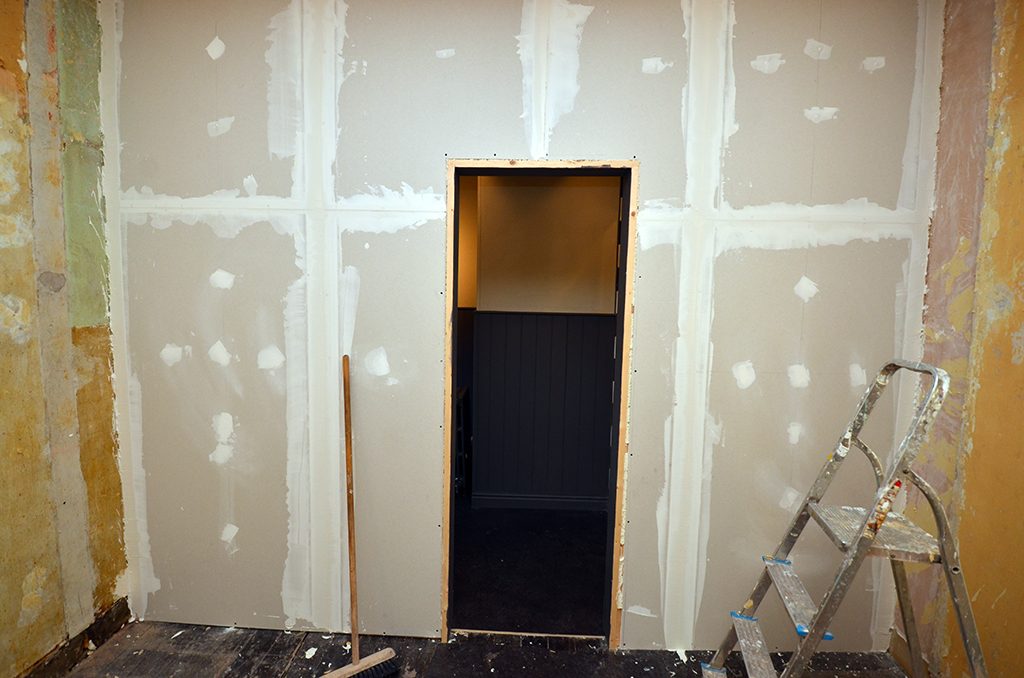 Once we had decided to go traditional with the shower it seemed obvious to do the same for the basin and toilet.

We have put wainscotting up on the walls up to the height that it was previously at, which is quite high. 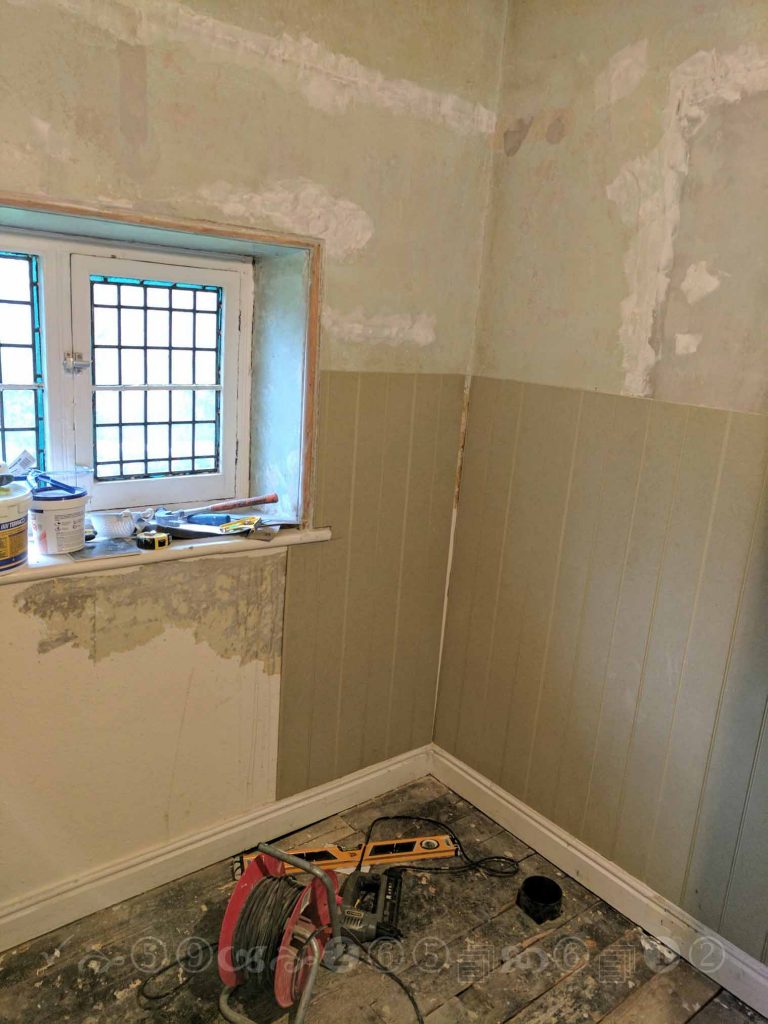 We have also had the first fix completed. This had been worrying me as our walls are very thick and trying, but after over an hour of drilling the plumber Dave broke through so we can have a toilet! 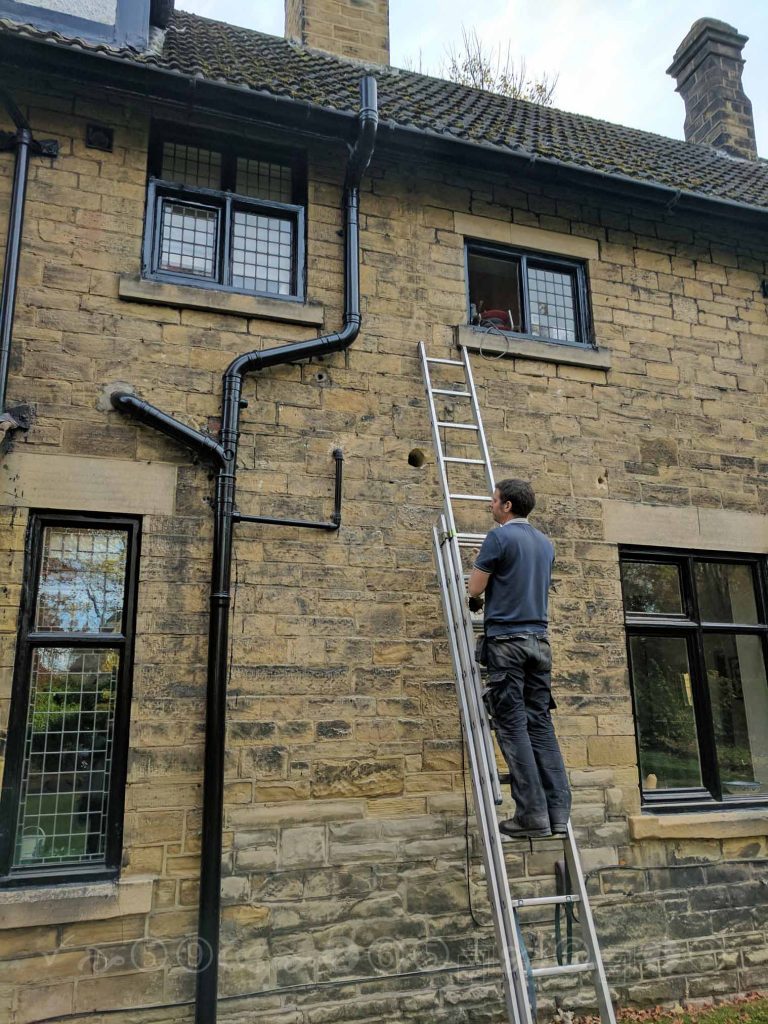 The plumbing was all done below floor level so is very neat, but annoying when it was being done. 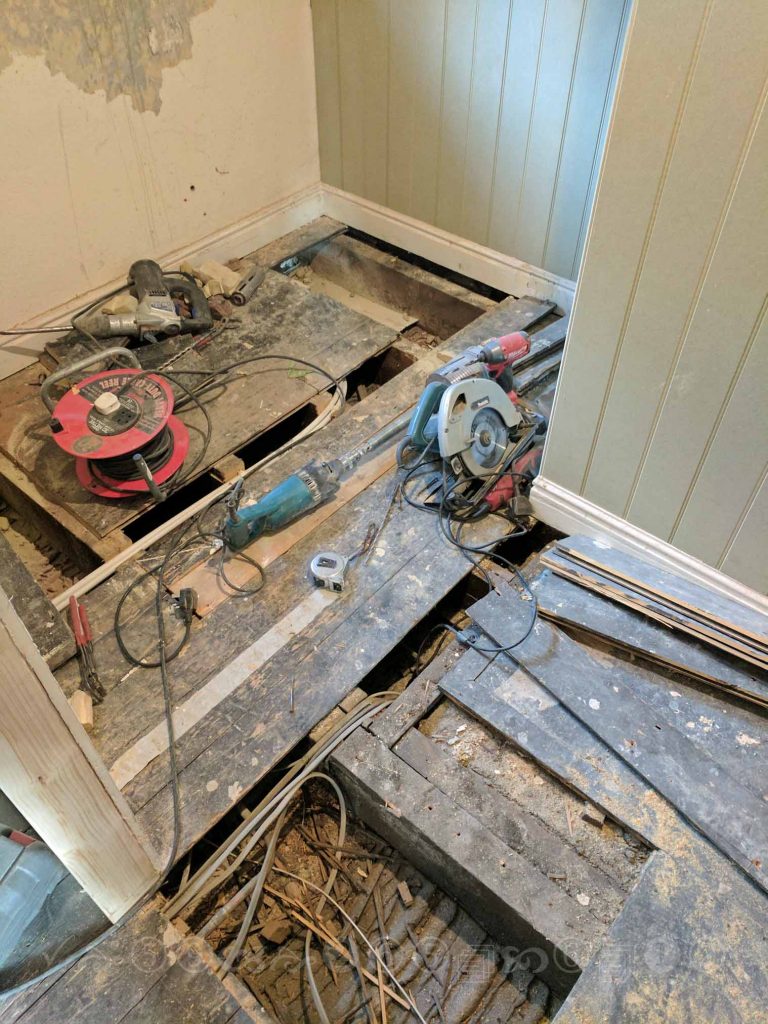 We are going for vinyl flooring. Some people can be quite snobbish about vinyl but I have a soft spot for it. The floor space is small and the floorboards were wrecked before the plumber started ripping them up, 60 years of office life has been hard on our floors. Good quality vinyl is warm, waterproof ,cushioned, hard wearing and cheapish (after haggling ours was £15.99sqm but listed as being £21.99sqm) we are going for Forbo Nairn Novilon Viva black flooring. It has a 20 yr guarantee. It is not a solid black but a charcoal. Before the vinyl is laid we need to board all the floor with 6mm Plywood. 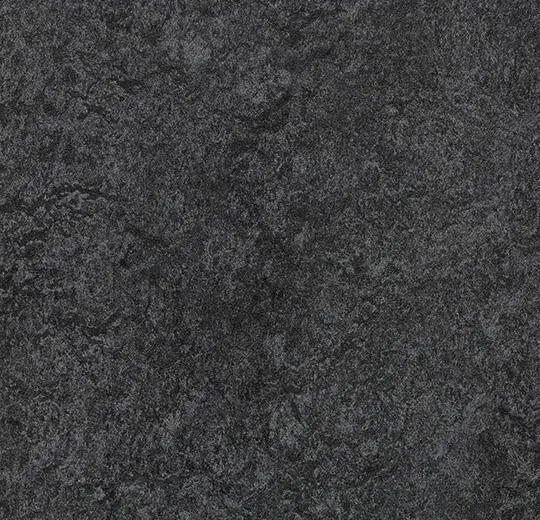 We are painting the wainscoting Valley of Desolation which is by Hicks and Weatherburn, which is a lovely warm dark grey (bit of red oxide in it no blue).

Valley Of Desolation Hicks and Weatherburn

To be honest I probably would have painted it Valley of Desolation regardless of what colour it is because I love the name so much. Valley of Desolation is where we used to go as kids on family picnics, it is up by Bolton Abbey near Simons Seat  and ends in a waterfall Barden Fell, it is a magical place.

The rest of the walls are going to be drystonewall which is a warm neutral.

We have gone traditional and chosen a Burlington Edwardian Sink, I like the cut off corners so I won’t keep walking into the corner and the raised bit at the back , we have gone for the 3 tap option. We did consider many options such as counter mounted, legs, but settled for a pedestal as it was the cheapest and simplest.

This is the toilet we have chosen with a raised cistern , (we are not having handles on the toilet seat though) The taps for the basin match the shower valve and are by Hudson Reed. By narrowing down what taps we wanted we were able to get the taps and shower valve/head very cheaply on ebay (60% cheaper than highstreet). 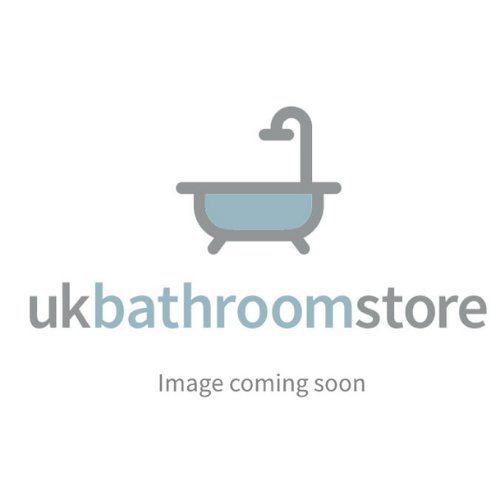 We chose Square tiles to match the leaded windows, but which colour? After much hunting we discovered that there are  two main manufacturers of tiles Johnsons and British Ceramic Tiles. These two companies make tiles for virtually everyone else. The tiler said “Johnsons are better quality as they are thicker, but nobody can tell once they are on the walls” I ordered samples from both and settled on the BCT Charcoal tile in gloss and a white tile in satin. 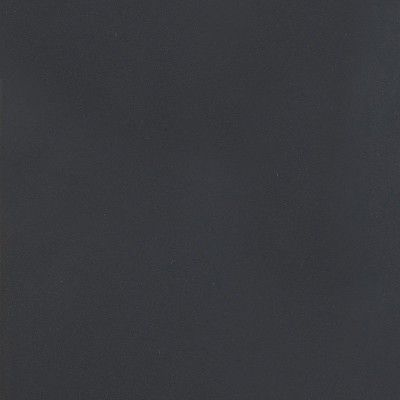 We are still deciding on the pattern of the tiles for the shower, we started off wanting only white with grey grout, 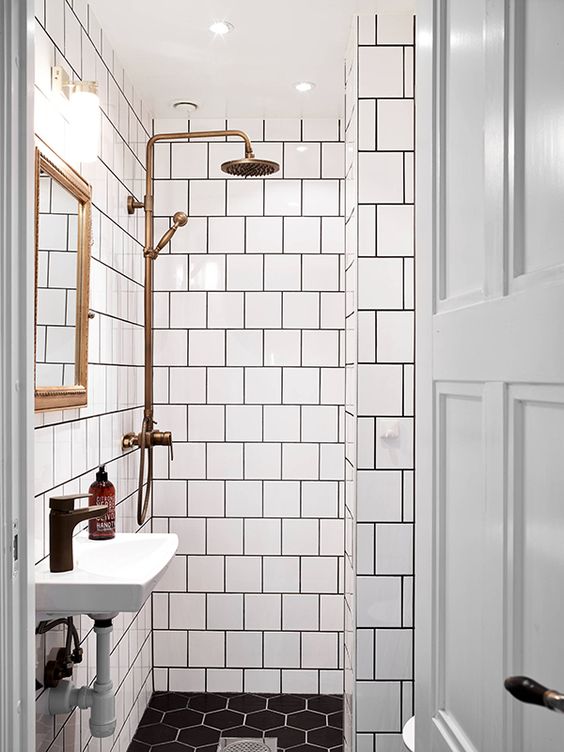 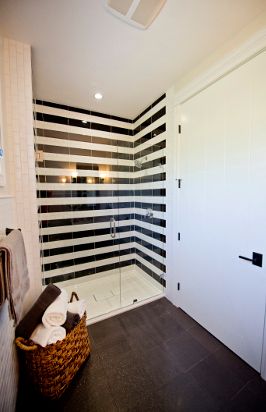 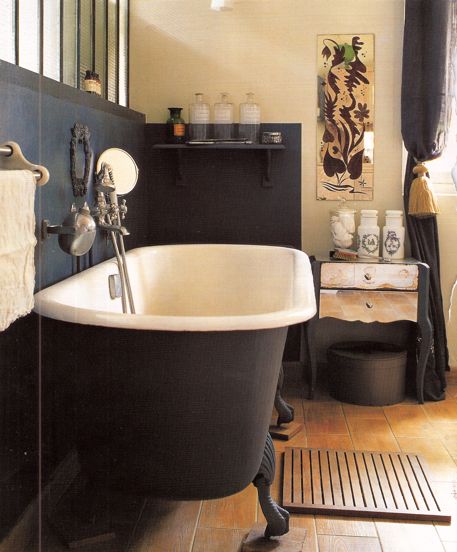 but now we are edging towards a chequerboard. 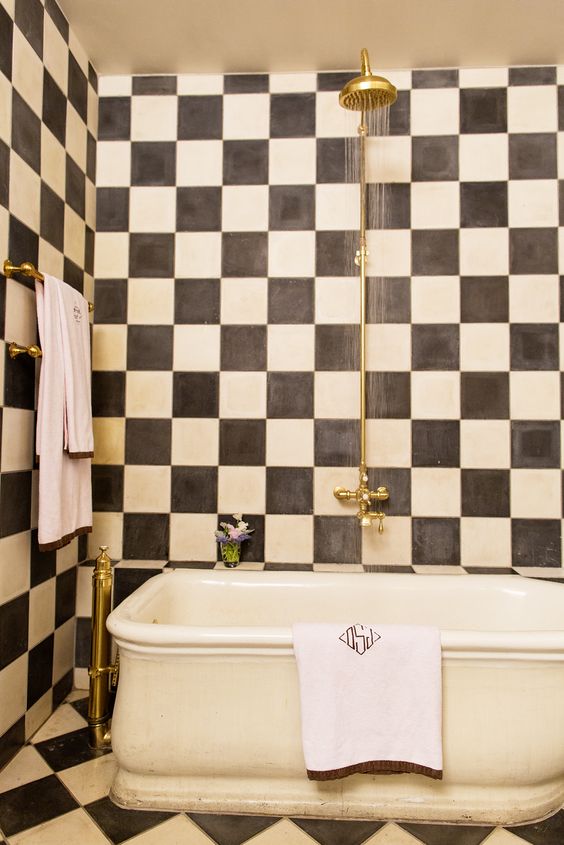 The tiler says he doesn’t mind after just completing a bathroom which was a replica of a Mondrian! 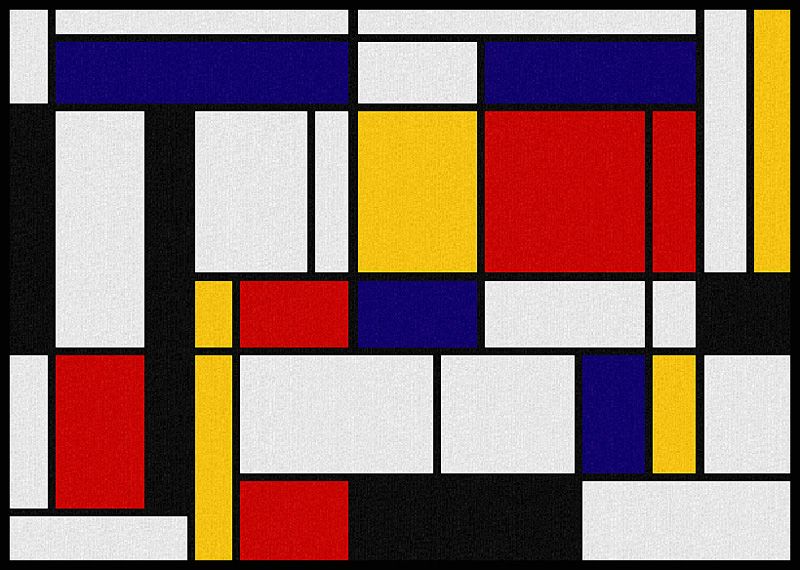 What do you think? checks or stripes? 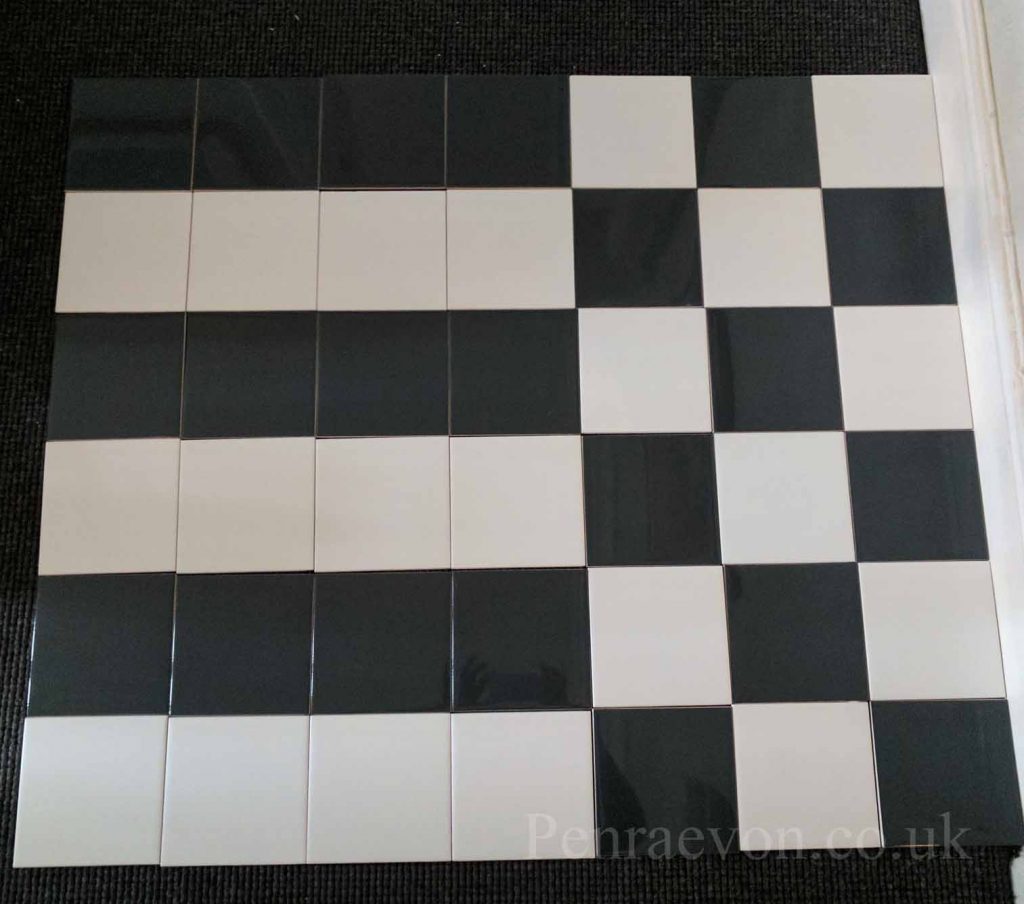 We are putting in a cast iron raditor, it was cheaper and more attractive than towel radiators. We have purchased a 4 section 3 column radiator (you buy by the section) so it is similar to the one below but not the same!  We have several of these radiators in different sizes if you want to read more – see previous blog on Radiators

I don’t actually use towels after a shower, instead we both have two giant towelling dressing gowns each that we use. You used to be able to get them from toast but I have also got one from The linen Press (bit big and heavy though!)

So all the decisions have been made and everything bought, this weekend we are making the door frames and architrave, decorating and fixing the plywood to the floor. The flooring is being put in on Thursday and the tiler comes on Sat. Finally we then get the plumber back to do second fix which entails installing  the basin shower valve, toilet etc..  come back soon to see the final result 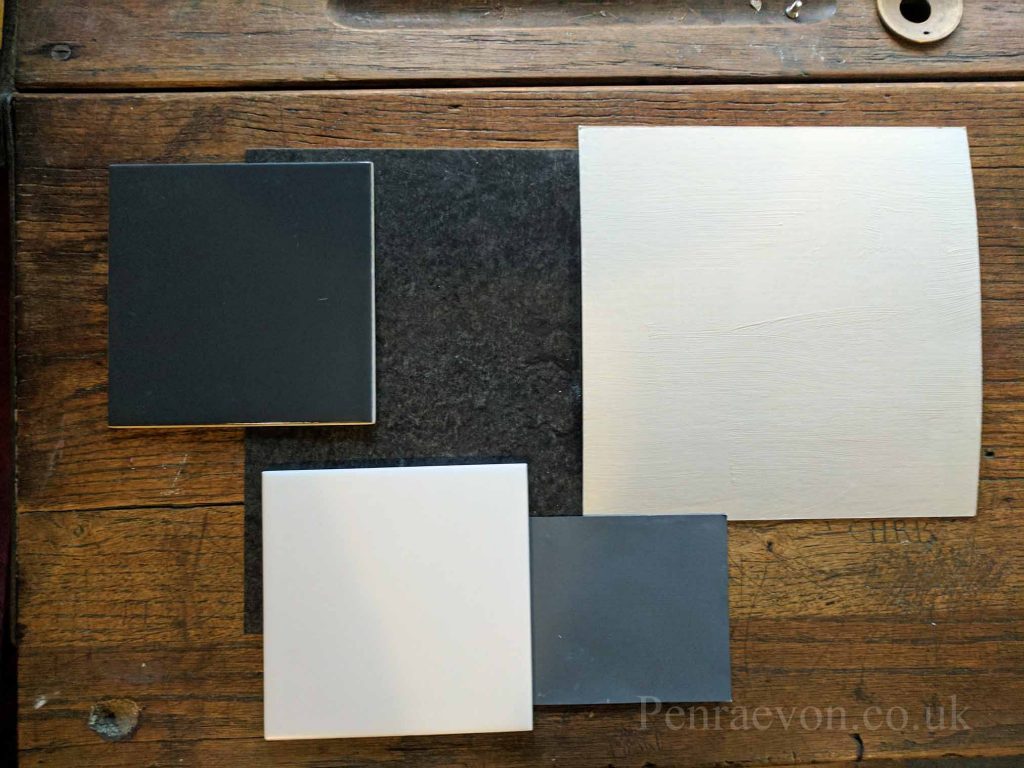