The Guest Room – A sneaky peek

I wish decorating a room was as simple as choosing a colour scheme.

Unfortunately in our house before you can get on to the good stuff (paint colours, wallpaper, curtains, lights) you have to go through weeks and months of stripping out the old. Woodchip wallpaper on the ceiling,  a window that had security grilles , windows with openers plastered shut , a massive window cill that had been put on top of the original and was full of cracks. holes in the walls, crumbling plaster, cracks in the ceiling, and rusty old radiators in the wrong place.

Fortunately you can skip all that and just see the after shots (not yet, it isn’t finished) , but to get the full impact do read this first

The horror before shots 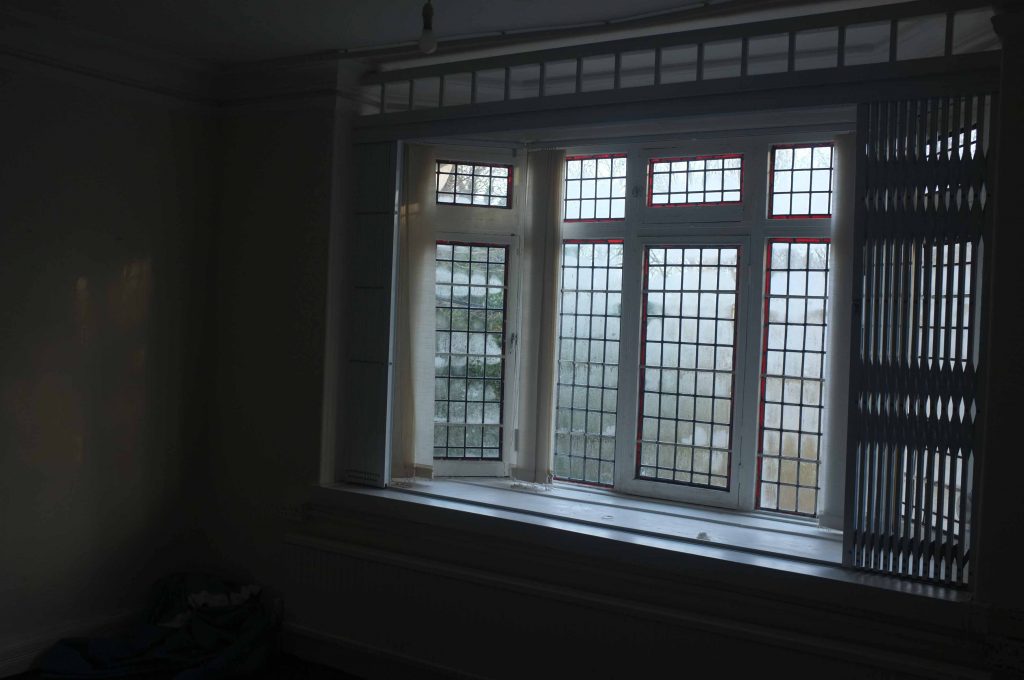 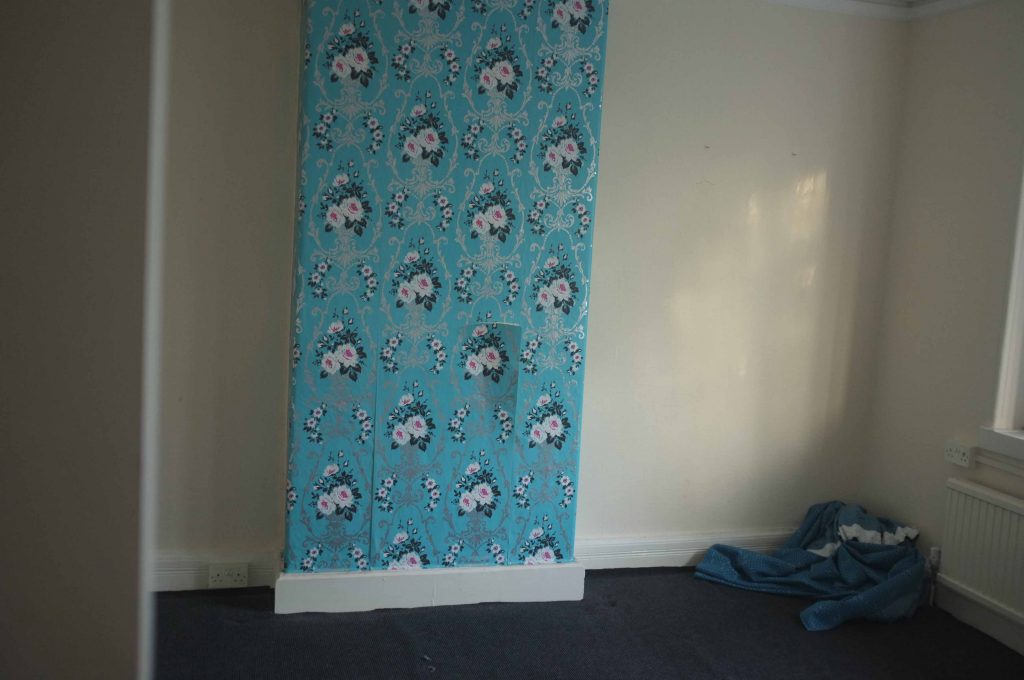 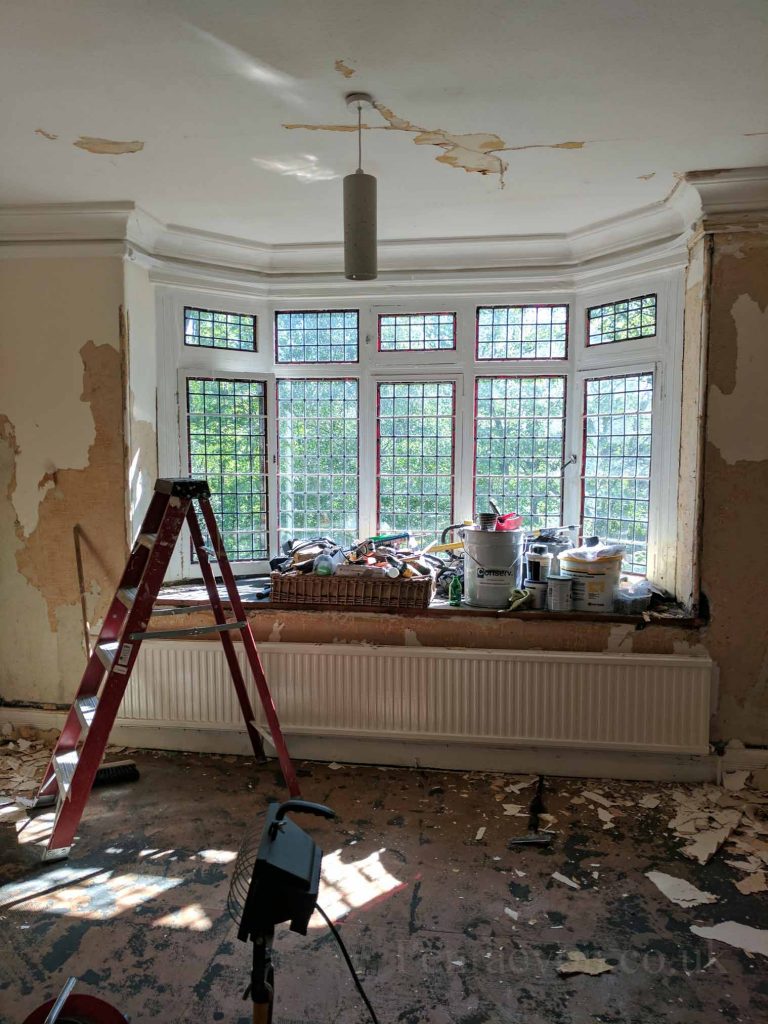 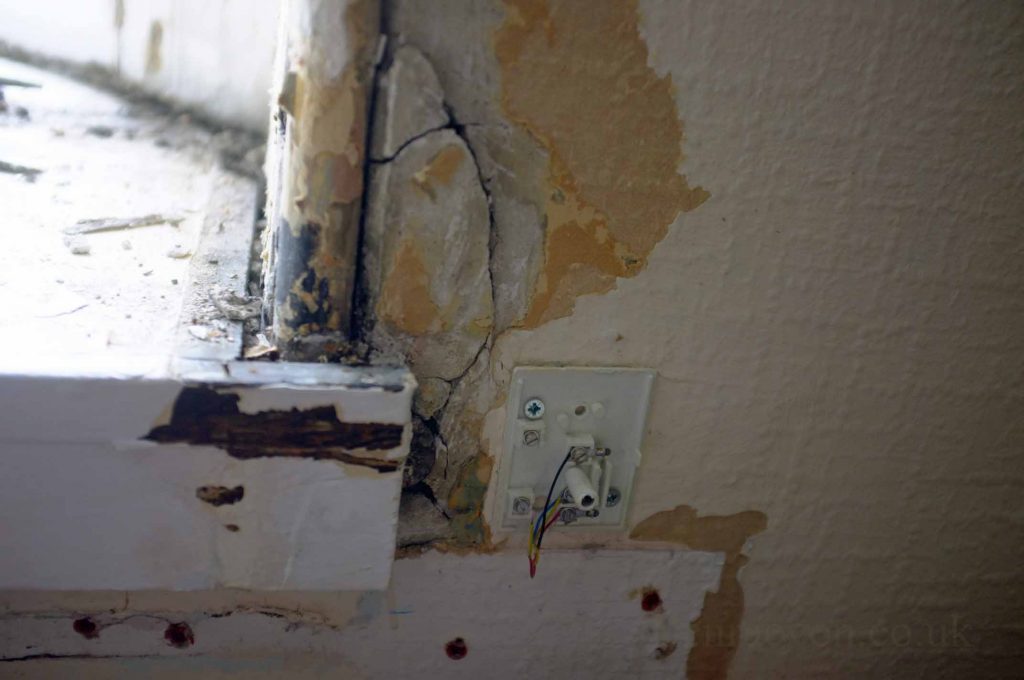 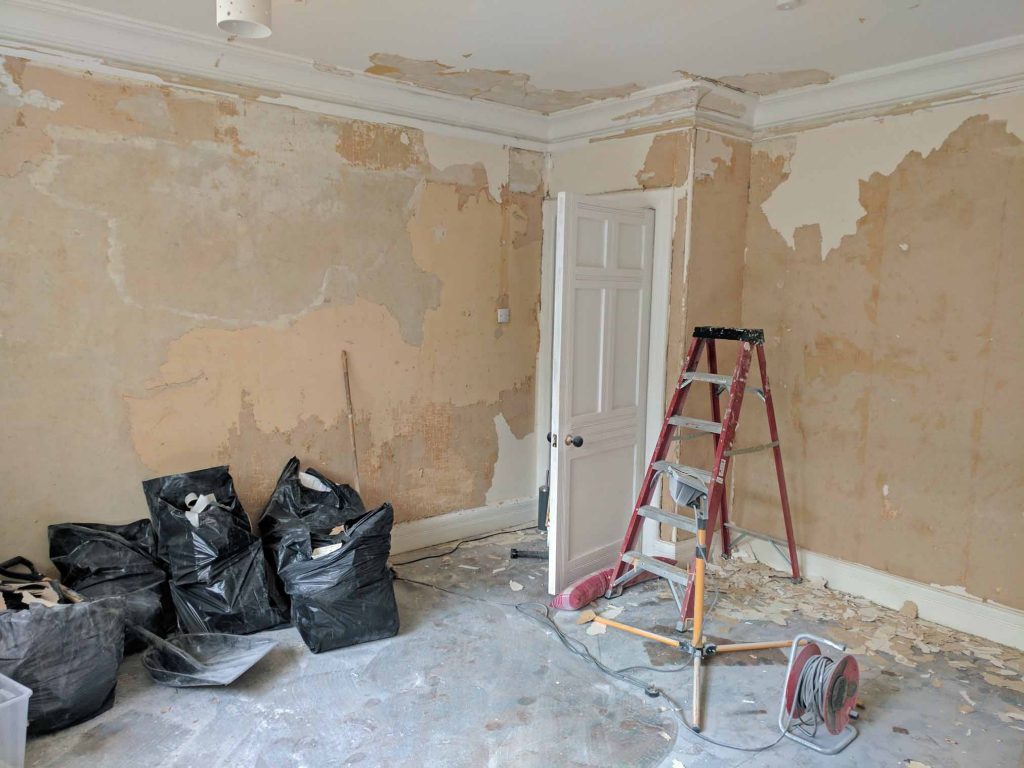 Fast forward, and here finally after removing trunked electrics, mending the plaster, stripping the room we got it back to this. 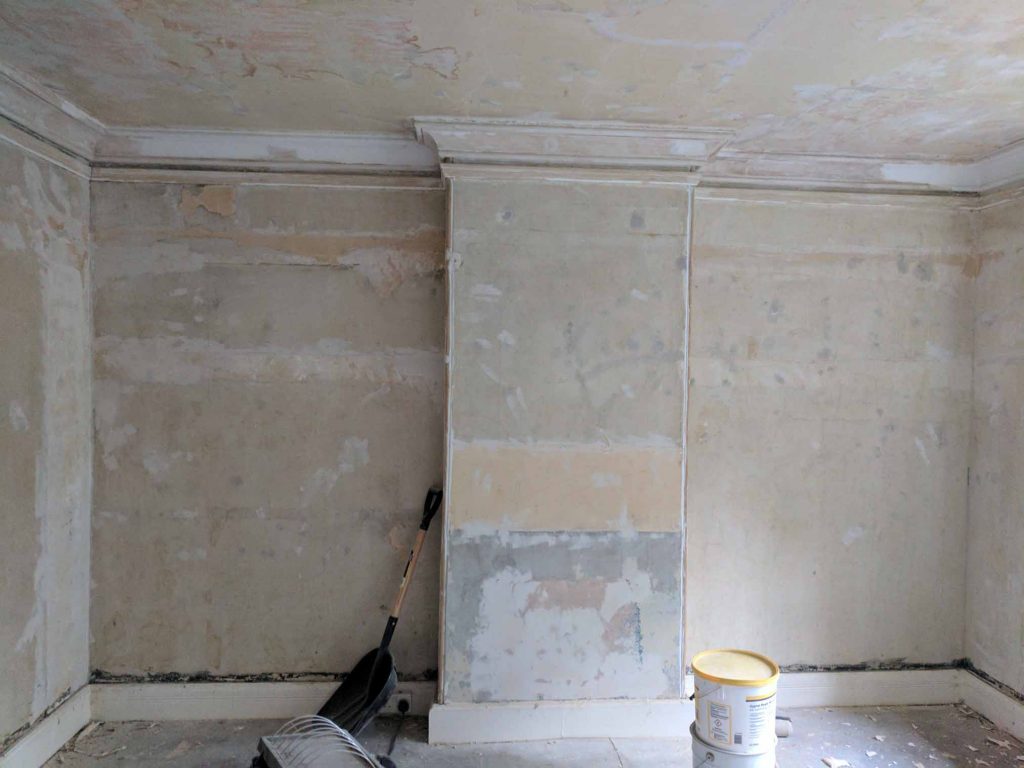 We were really pleased with the black hall and wanted to carry on the black woodwork into the guest room. What we didn’t expect was that we would decide to paint the ceiling black!

Are you turning into a goth?

When we told my mum she was not impressed. I tried to explain it wasn’t black but more of a  charcoal, and honestly she would love it when all was finished, she is still not convinced. Hicks and Weatherburn mixed up more of the eggshell and an emulsion to exactly match and we got painting the room in all its inky glory. The old plaster has lovely edging details on the corners and we didn’t want to paper over these, instead we painted the edges so that when we paper it will show the edge detail. 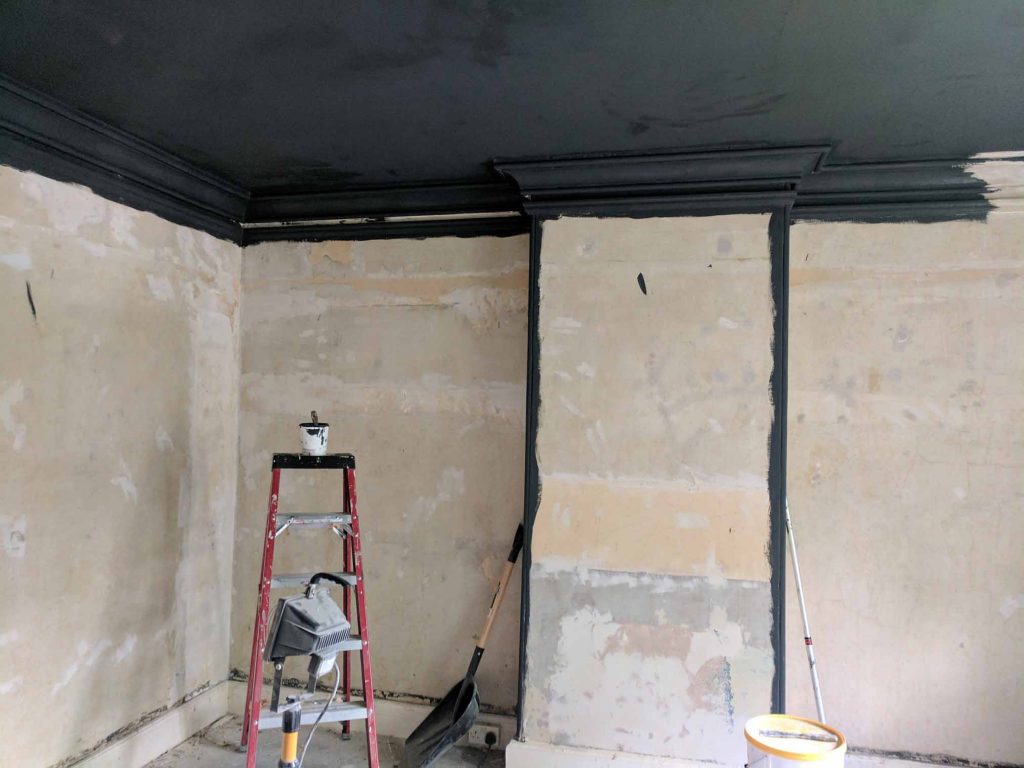 Once we had painted it we then checked over it and touched up any dints, hairline cracks with plaster before repainting 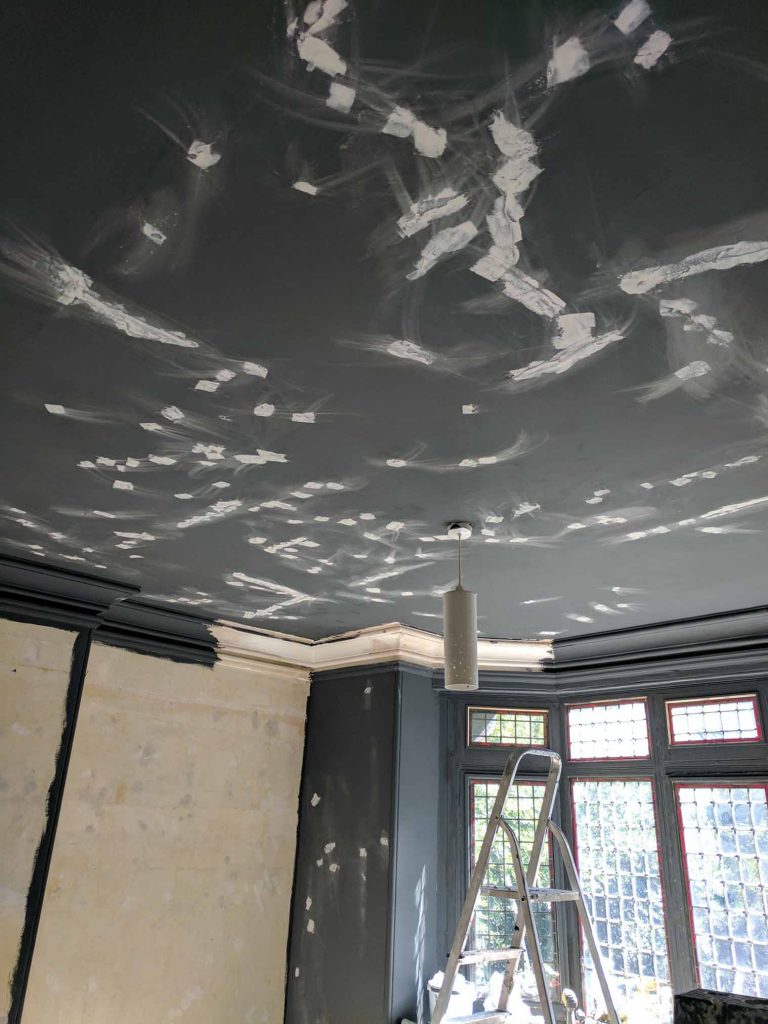 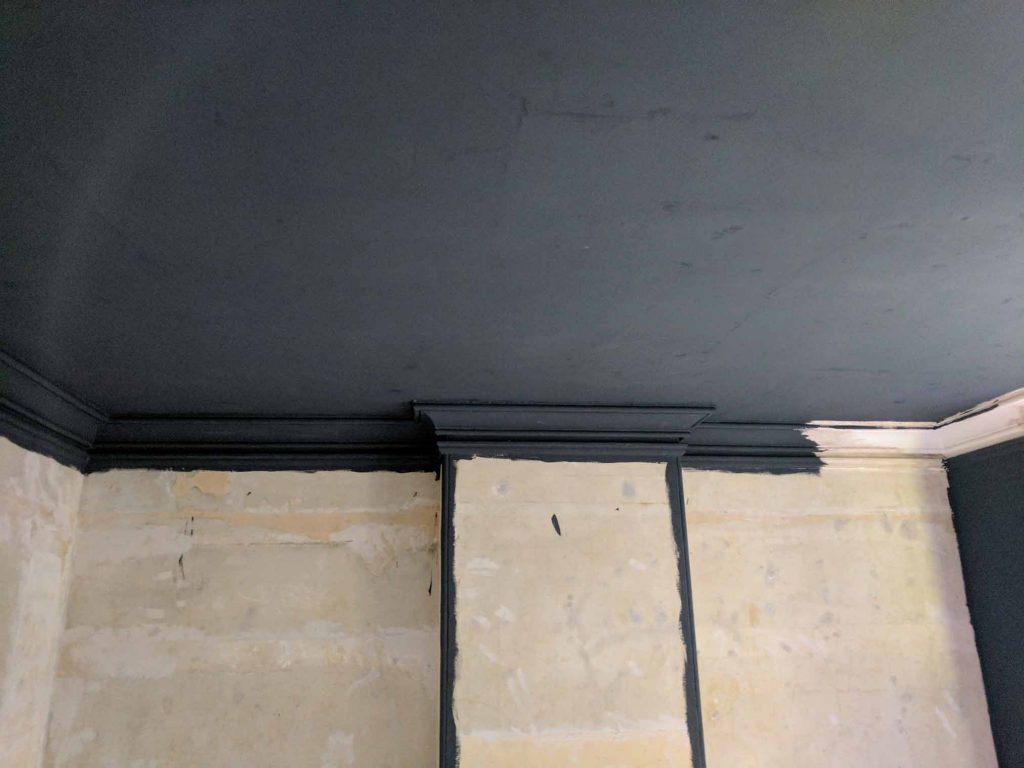 There are so many different delicious patterns to choose from when choosing wallpaper. In the end we both agreed on a Little Greene wallpaper called Vine. It is heavily influenced by William Morris Wallpaper on display in the Whitworth Gallery. We haven’t used wallpaper in the house before but we thought the guest room would be a good place to experiment. I enjoyed doing it! 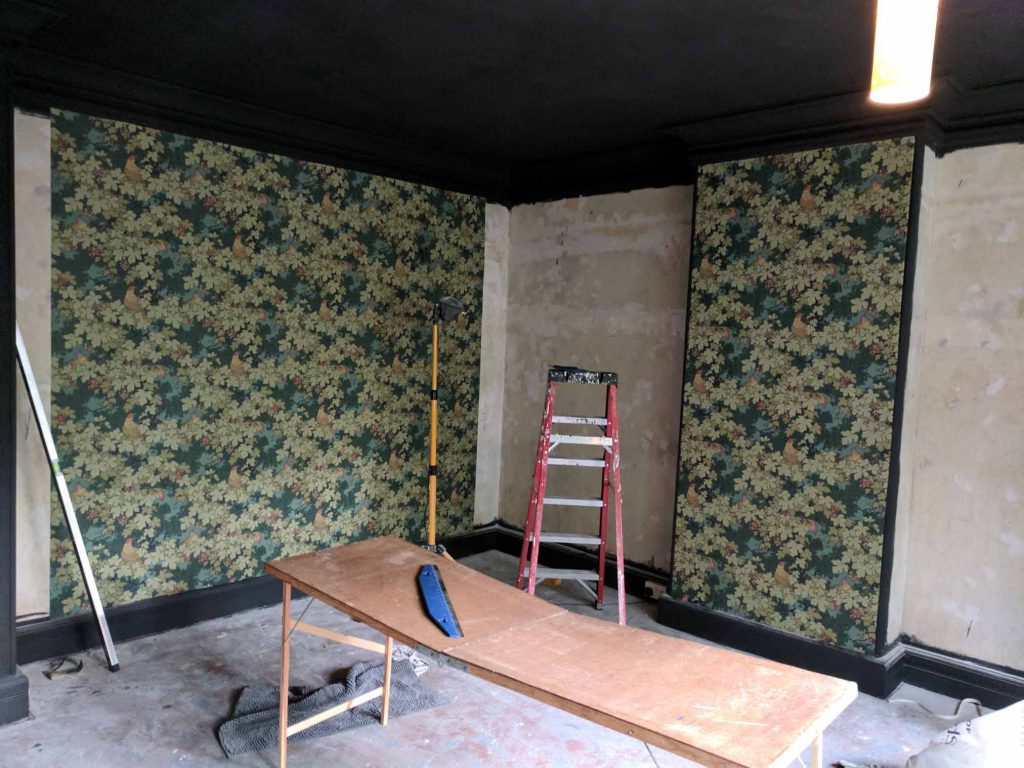 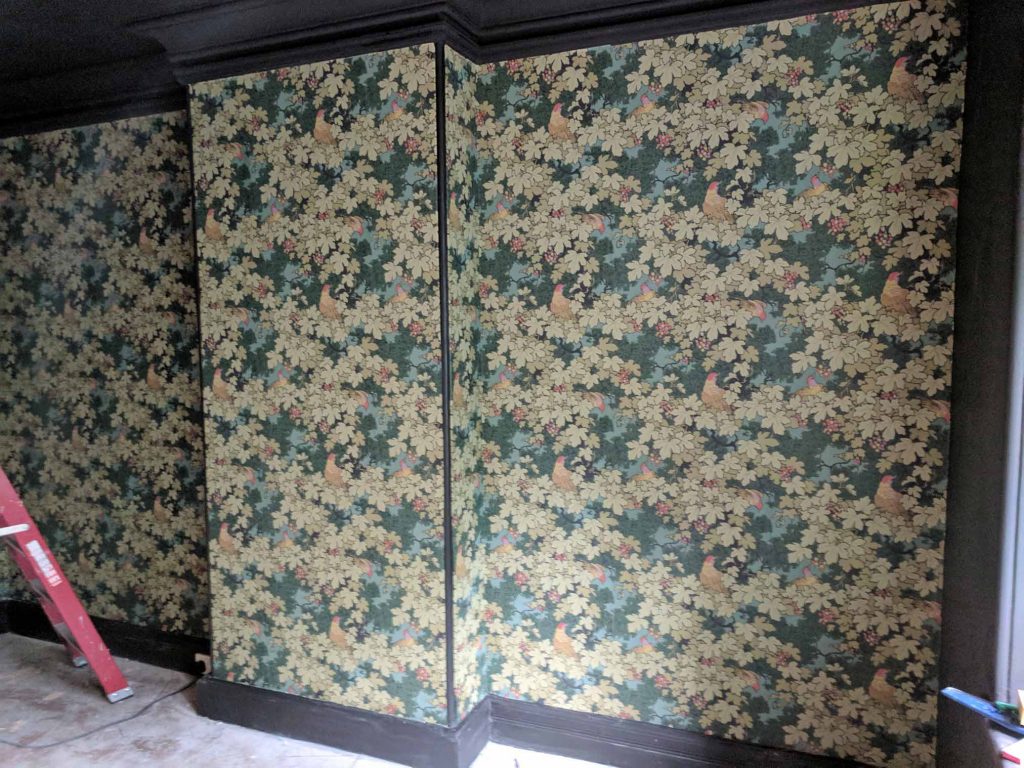 Searching for the right feature light for the guest bedroom had become a mammoth task. We had searched in so many shops and found some lovely lights but we could not agree (look at the pinterest link, there are some lovely ones all under £250). Out of the blue, whilst searching on ebay, I came across this beauty. It has five arms and is 1m wide and 1m deep (not including the drop). We both agreed it was beautiful. It was brass, it was a statement, we loved the Secesionist style which felt in keeping with the room.  It is a Vintage Berliner Messinglampen which normally retails for £2000, I managed to get it for £100 and the lampshades are real cut lead crystal.

It was a collection only in the middle of the Pennines (2o miles from us), fortunately it was still in Yorkshire – not Lancashire. The woman selling it had recently moved back from Germany where it had hung in her house. Unfortunately for her, and lucky for us, the ceilings in her Pennine farmhouse were too low to accommodate this massive light, so she had to sell it. 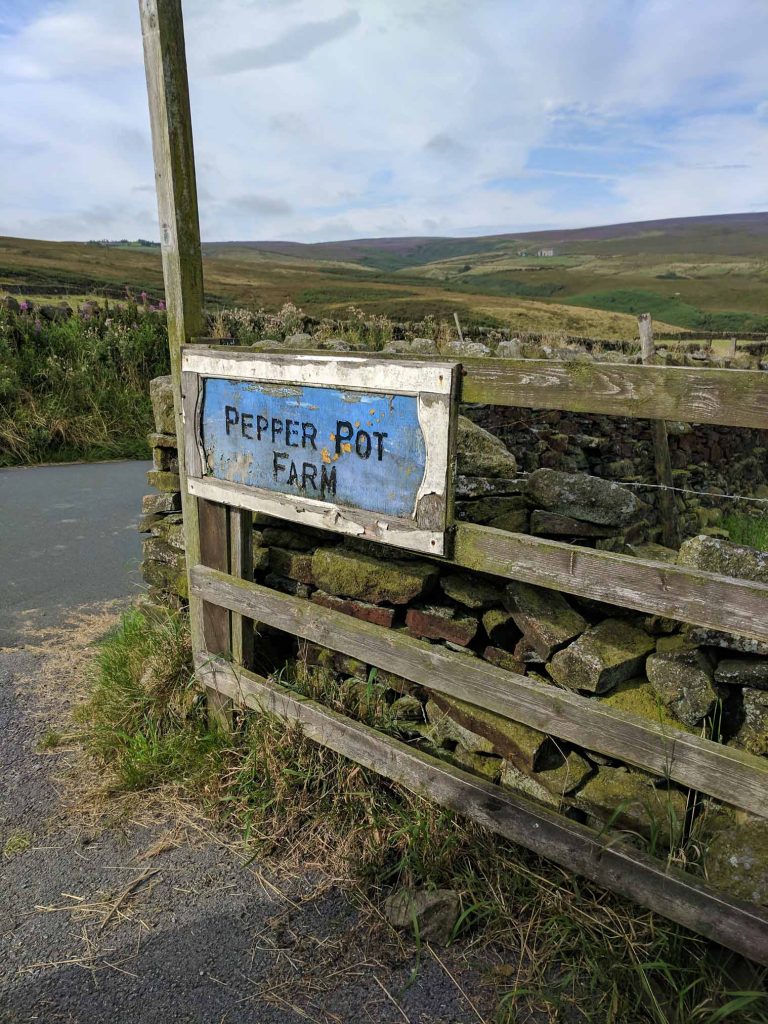 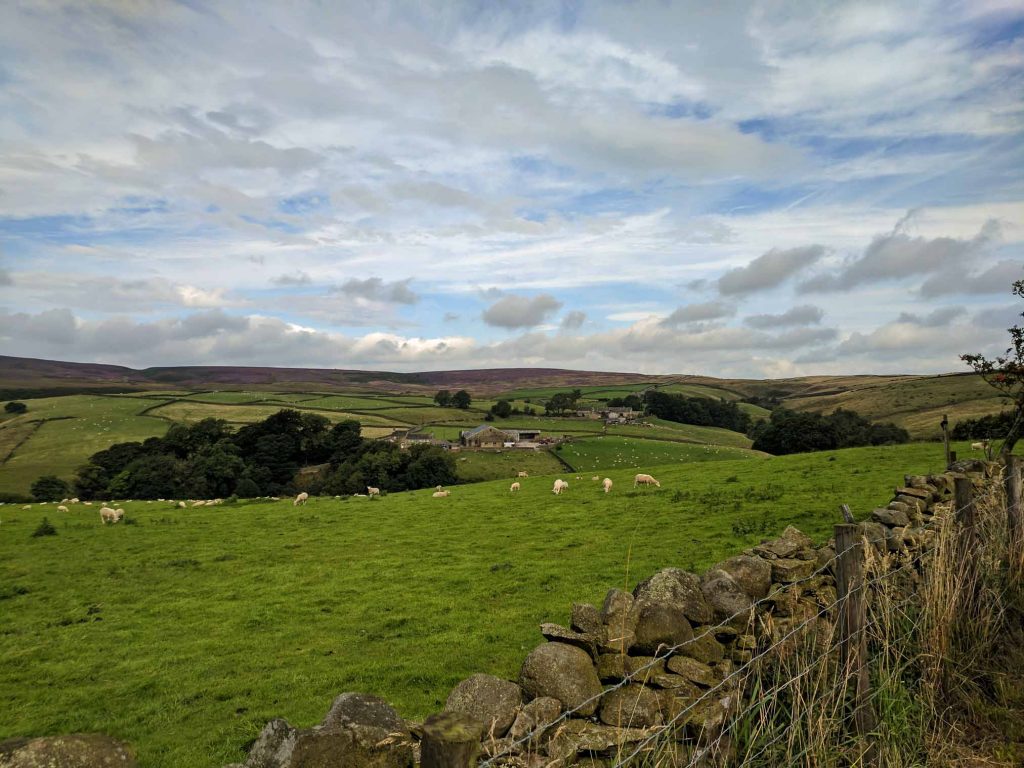 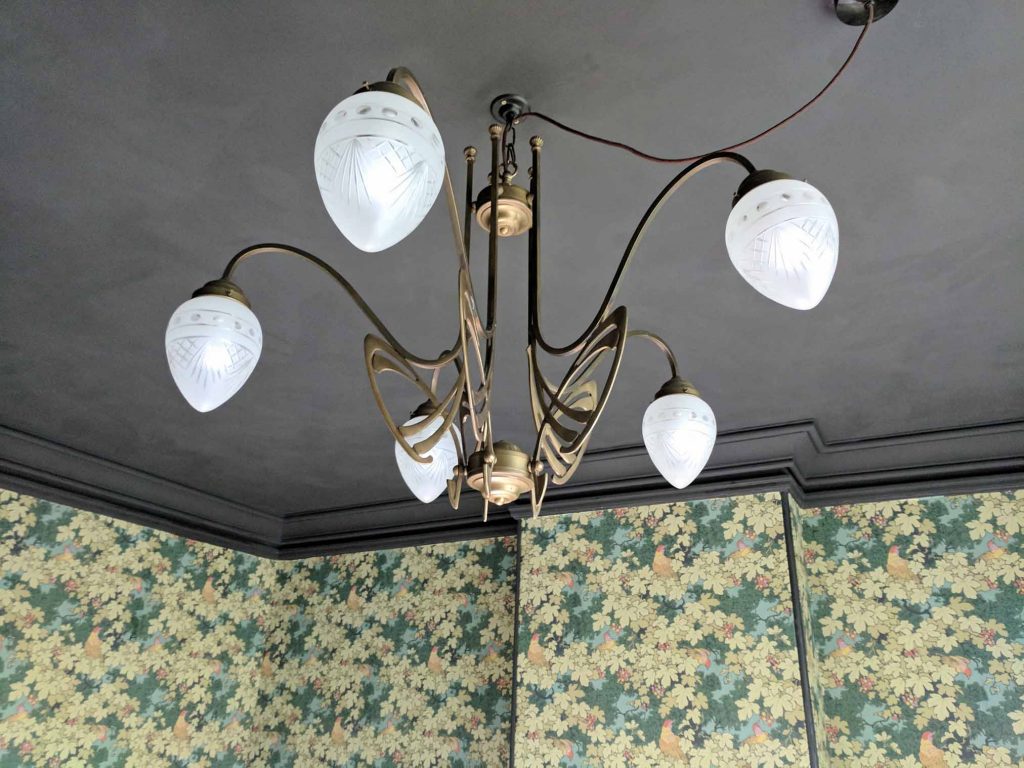 The hall carpet , had been such a success we decided to use it in this room too (Jacaranda Natural Weave square Charcoal)  it is a 100% wool with a jute backing. 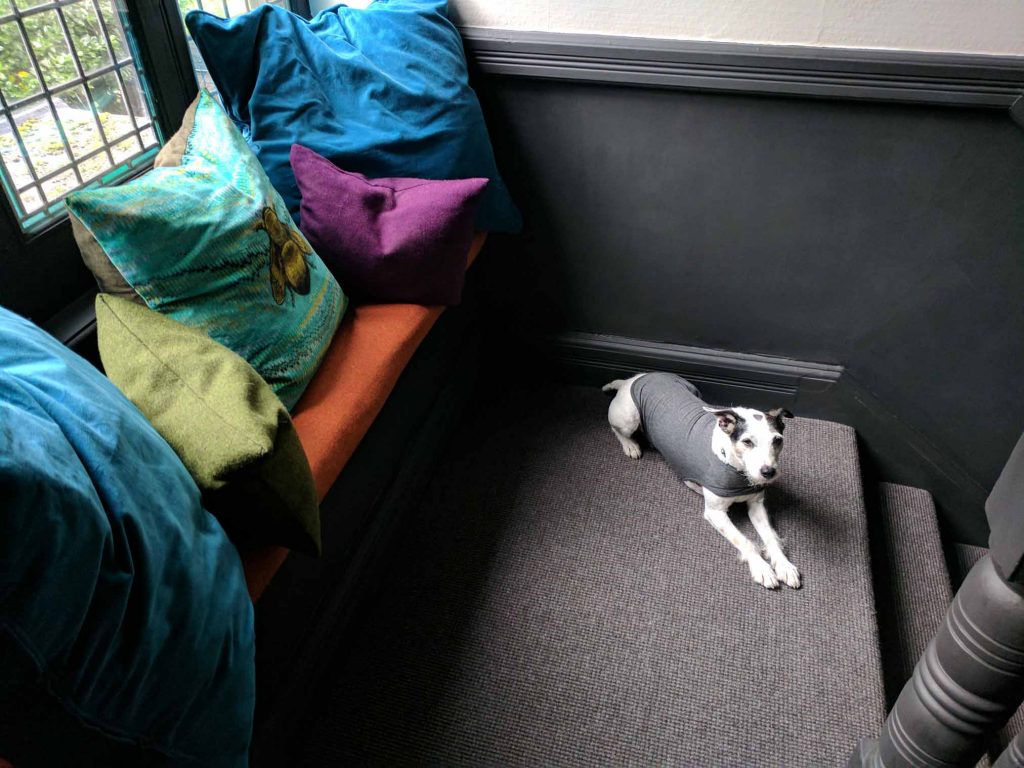 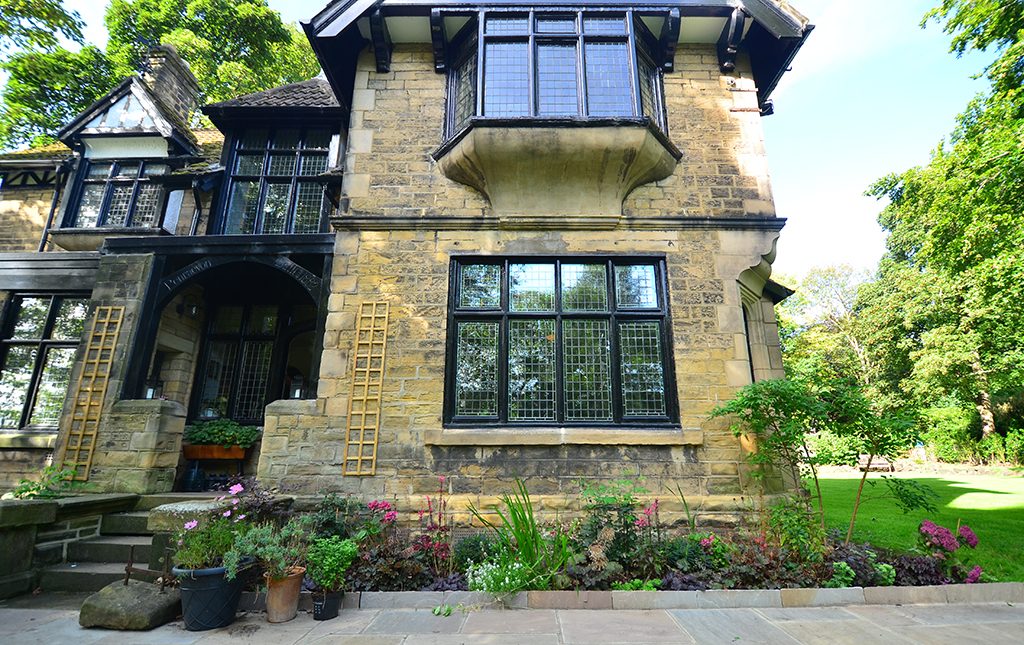 The window on the inside had a new window ledge which was higher than it should be and had a big divide along the middle as it had been constructed from two pieces of wood. First thing was to pry it off, and see what was below. I am a massive fan of the crowbar. 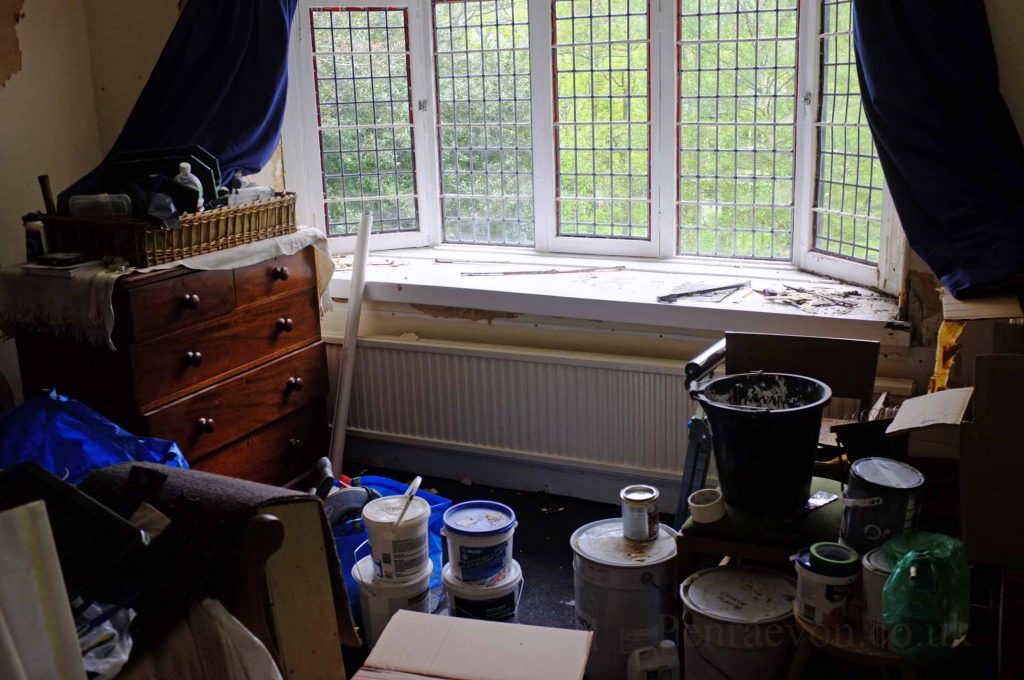 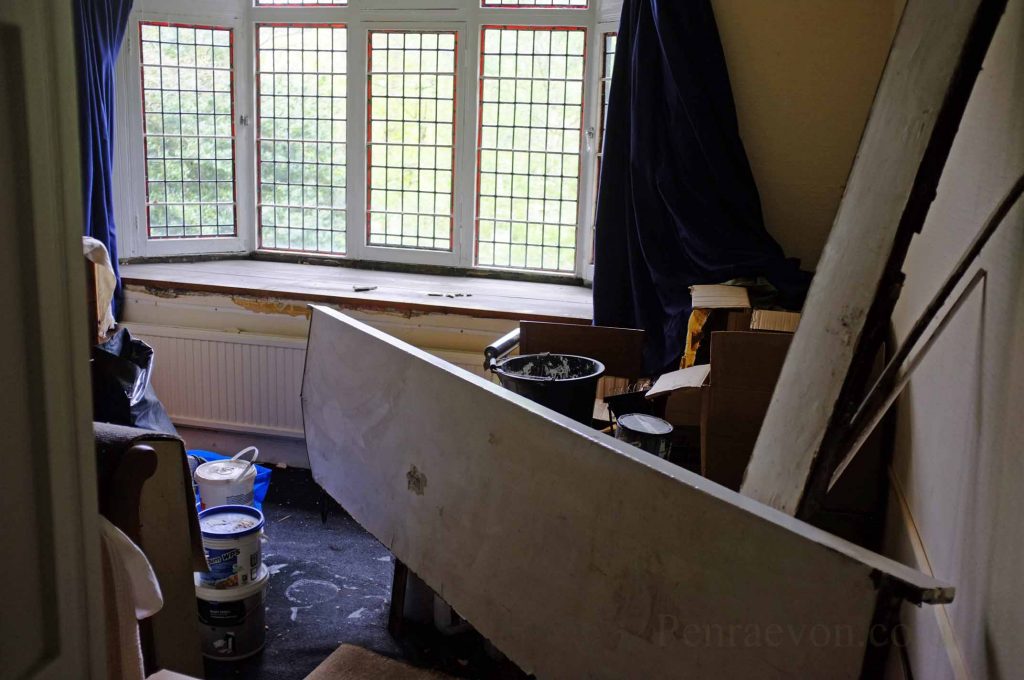 Removing the window ledge revealed the original below.  It was created out of tongue and groove and had warped and split apart over the years, which is probably why they had covered it over. They had also cut off the original bullnose leaving a jagged edge. 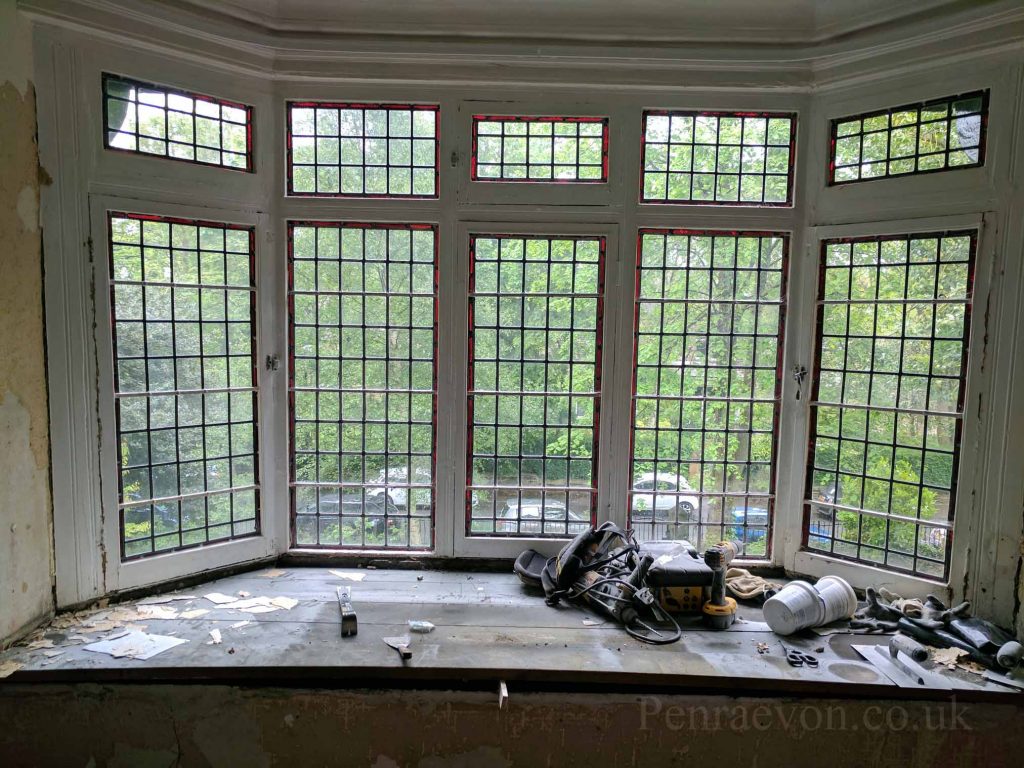 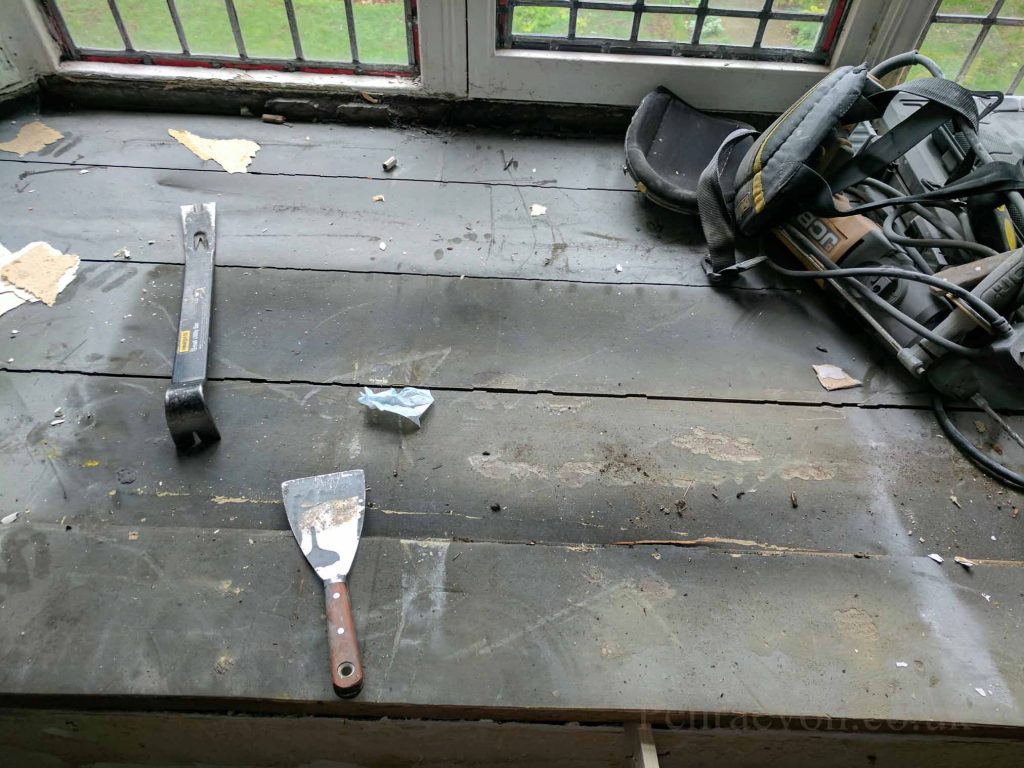 We removed these planks carefully and revealed the oriel window structure. It was all dry and solid so we put some insulation inside to help keep the room warm (this window ledge is 2.7m by 2m), placed the boards back and screwed them down. 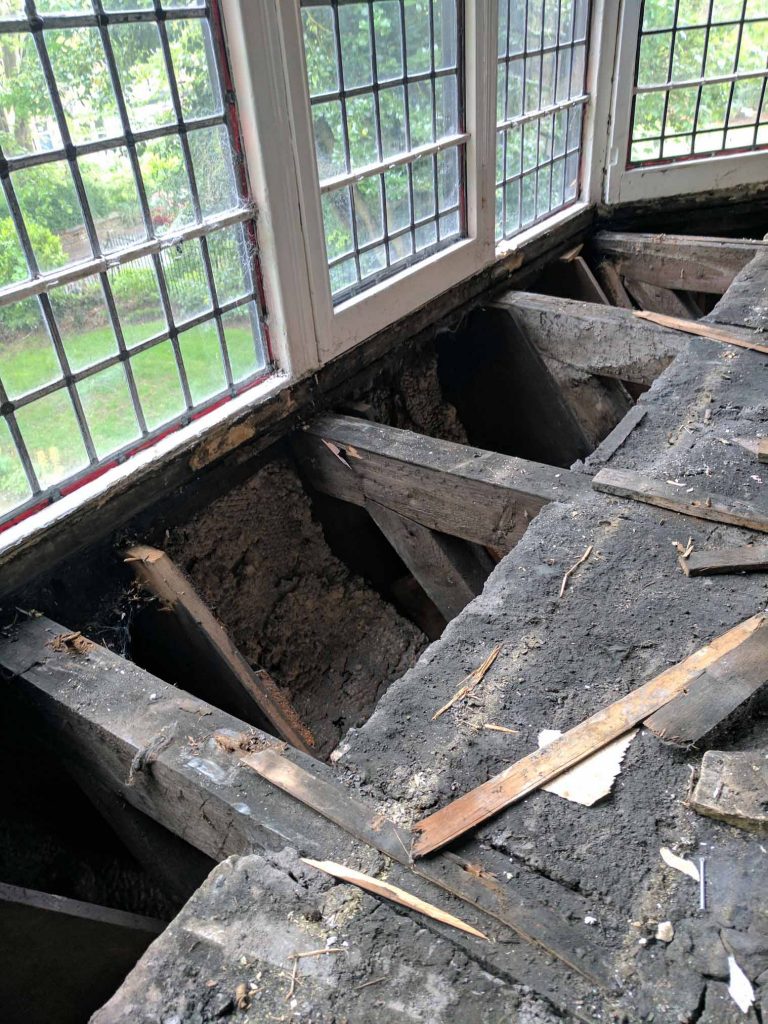 A giant piece of plywood was then put over the top of the whole thing and screwed down. This gave us a smooth surface, the bullnose of the window ledge was created by joining two pieces of quadrant together to form a semi-circle, this was then screwed onto the old edge to create a seamless finish.

In the meantime Gerry the Stained Glass man took out all the windows, replacing them with plain glass, whilst he took the original windows to work on them. He cleaned, repaired and replaced some of the old crumbling lead before encapsulating them between a double glazing unit. Finally they are then put back into the original frames. 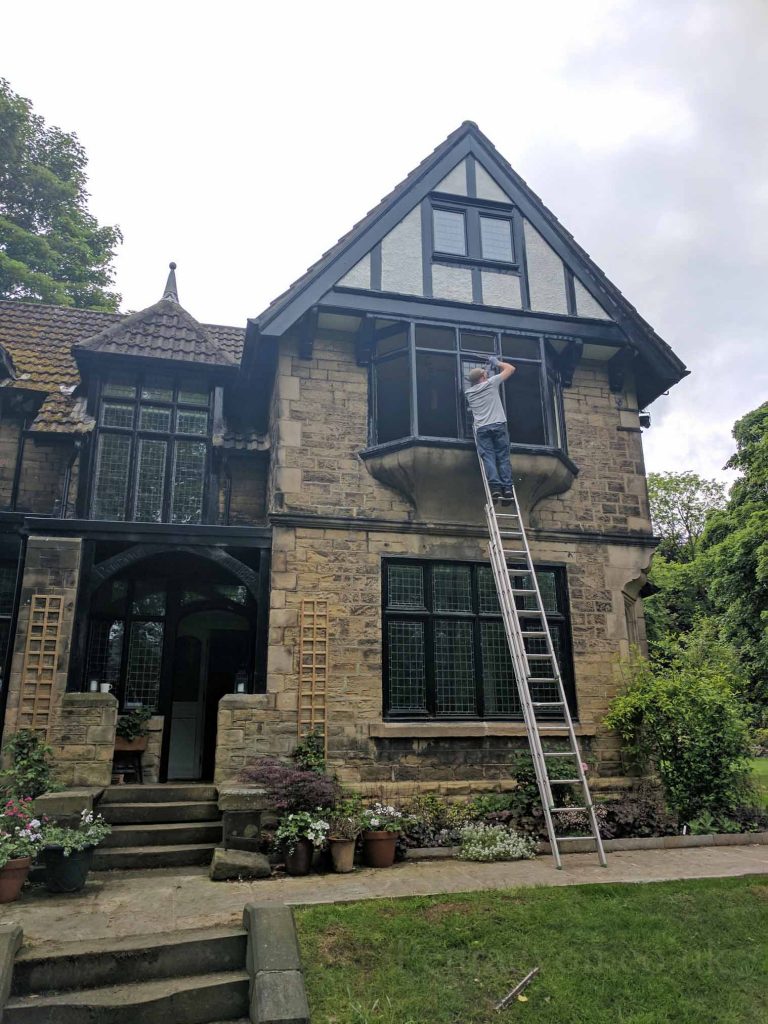 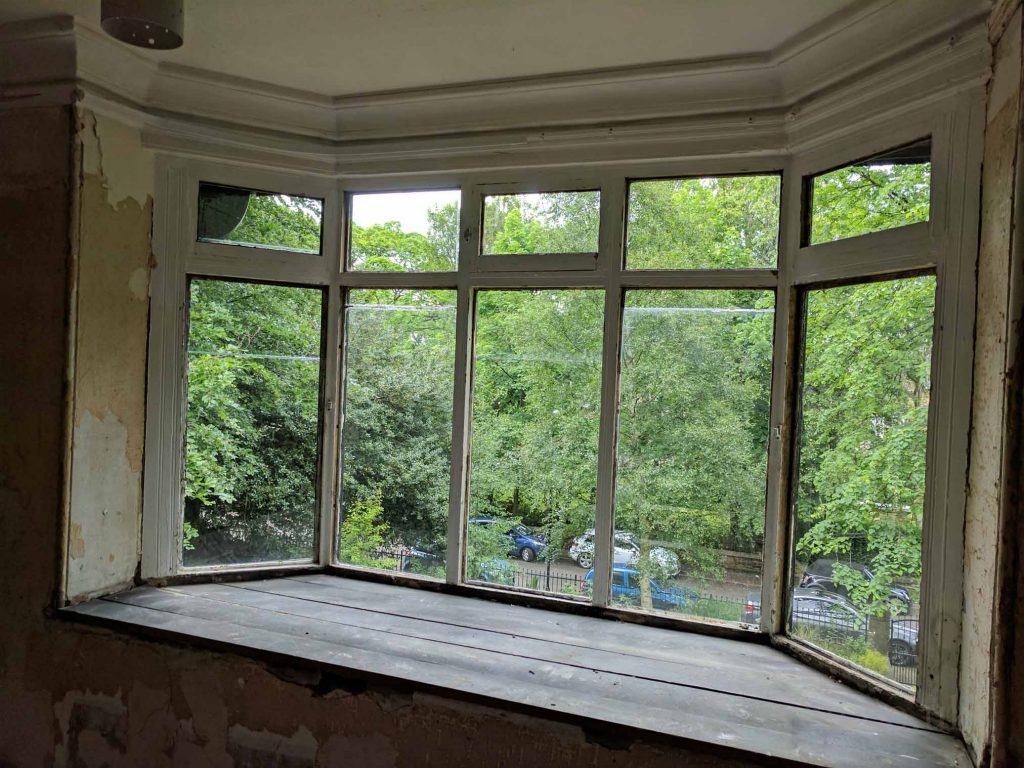 Here it is all painted black (paint still drying!) check out the sexy brass monkey tail fasteners and the bullnose. 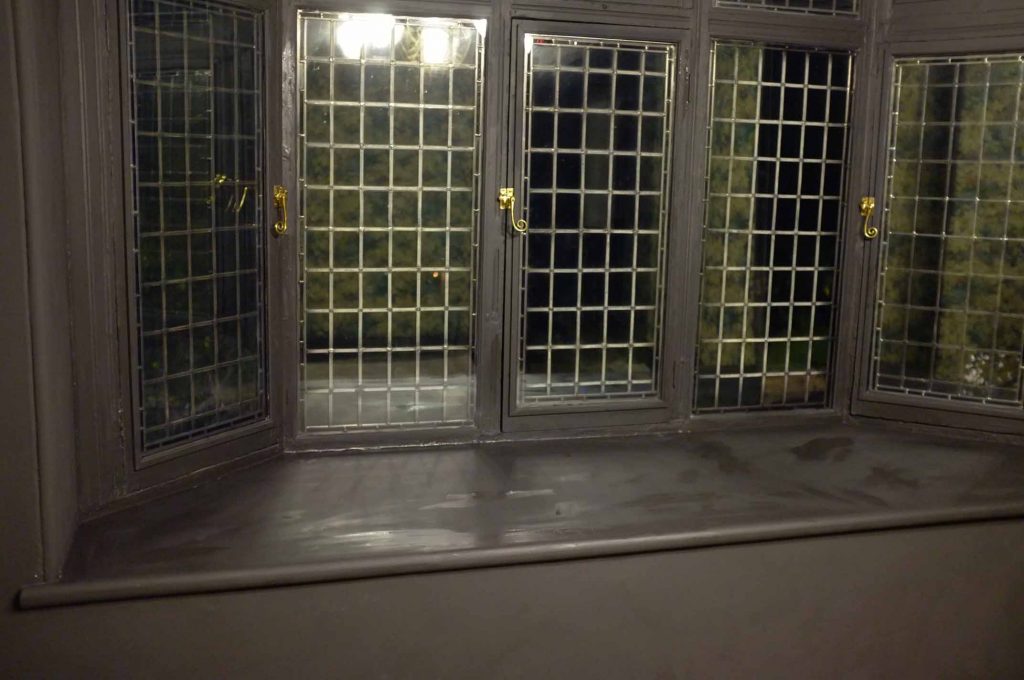 Well you will have to wait and see, as will we. The carpet needs fitting, the radiator needs to be plumber in and the furniture all moved back in. But for now our work here is done, come back soon and see the end result.