This room was the original Kitchen (part of the kitchen scullery pantry set of rooms). The fire would have been a great big Yorkshire range which would have heated the water for all the house as well as being used to cook all the food. Opening the fireplace again was obviously on the cards.

Over the years, the range has been removed, a gas fire installed, later still the gas fire was removed and the wall papered over and bricked up (you can see a faint square where the gas fire had been). 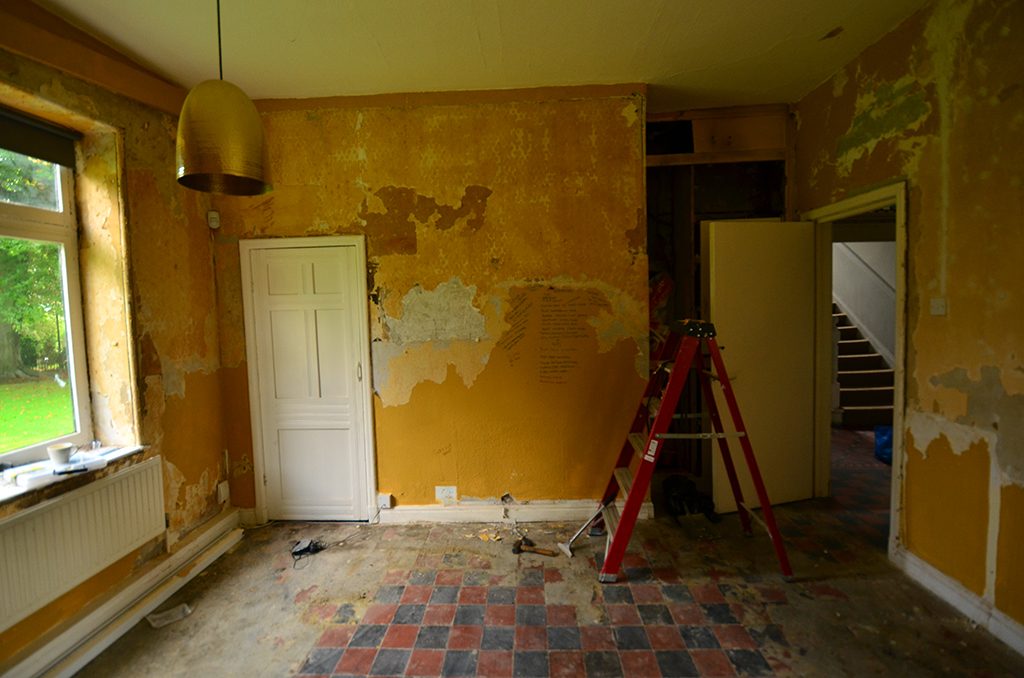 We knew the fireplace was here, so first we took a breaker to the wall to discover where the lintel was – there were clues as the moulding on the corner of the wall stops and also the paper on the wall changed design. 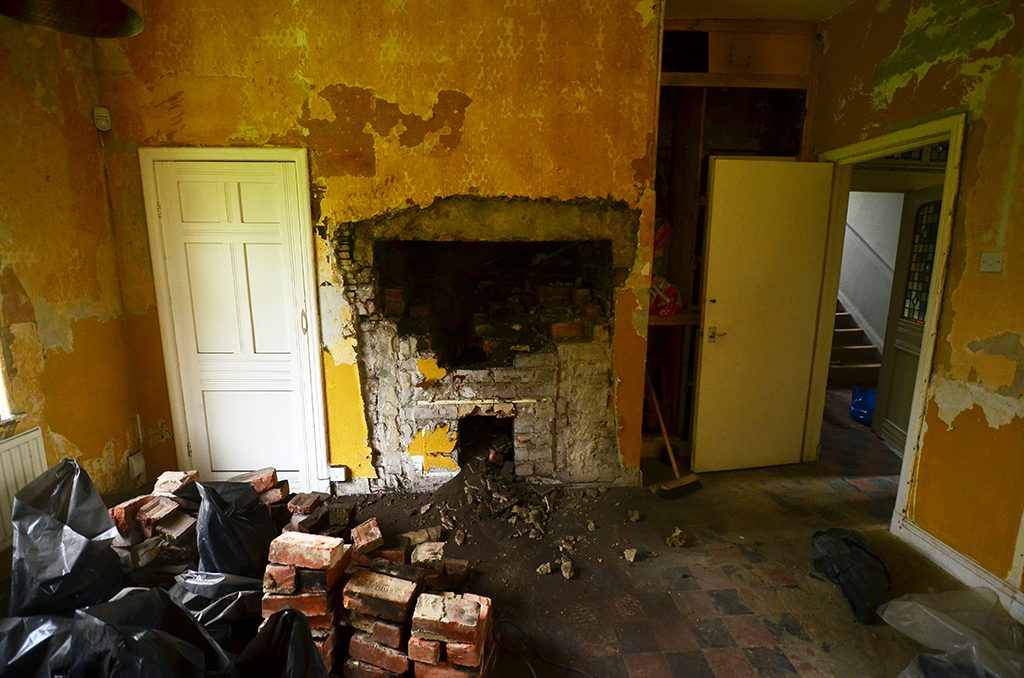 Here you can see the exposed stone lintel and also how the fireplace opening had been reduced in size over the years and filled with bricks. The bricks were not tied into the original fireplace wall and many of them were just loose and piled on top of each other. In the end we removed over 300 bricks from the opening. We were very pleased and relieved to discover that the original floor tiles extended into the fireplace. The fireplace is taller than a standard fire place at around 170cm. The amount of soot in the fireplace and covering the bricks was horrible; we were filthy (see below), the room was filthy and soot dust in the air was very acrid. 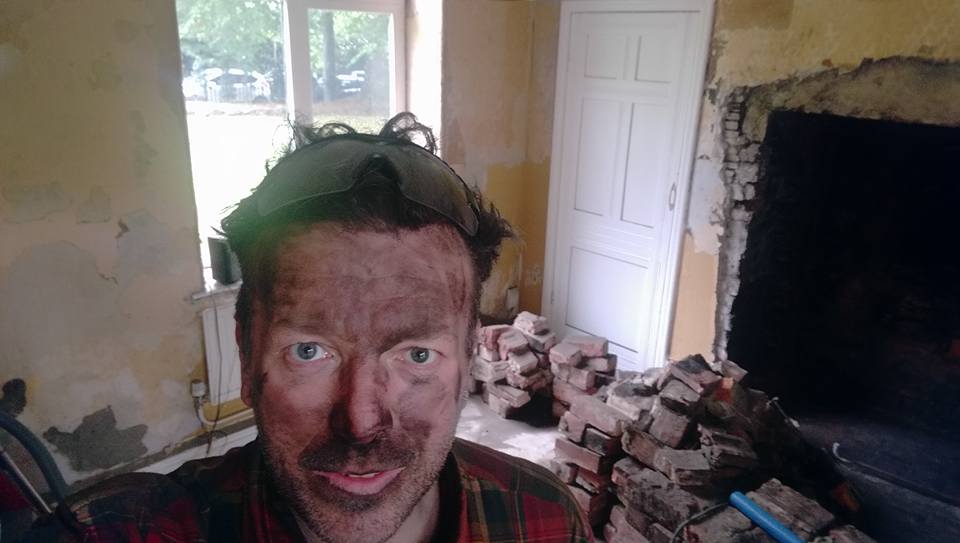 It took three goes in the shower to get rid of all the soot. The chimney sweep was called in and he gave the chimney a good sweep and checked its condition. We found three bird skeletons but no bags of gold.

Whilst opening up the fireplace we damaged the lime plaster surrounding the fire. We also exposed some of the original laths. To remedy this we decided to have a go at doing our own lime plaster repairs. 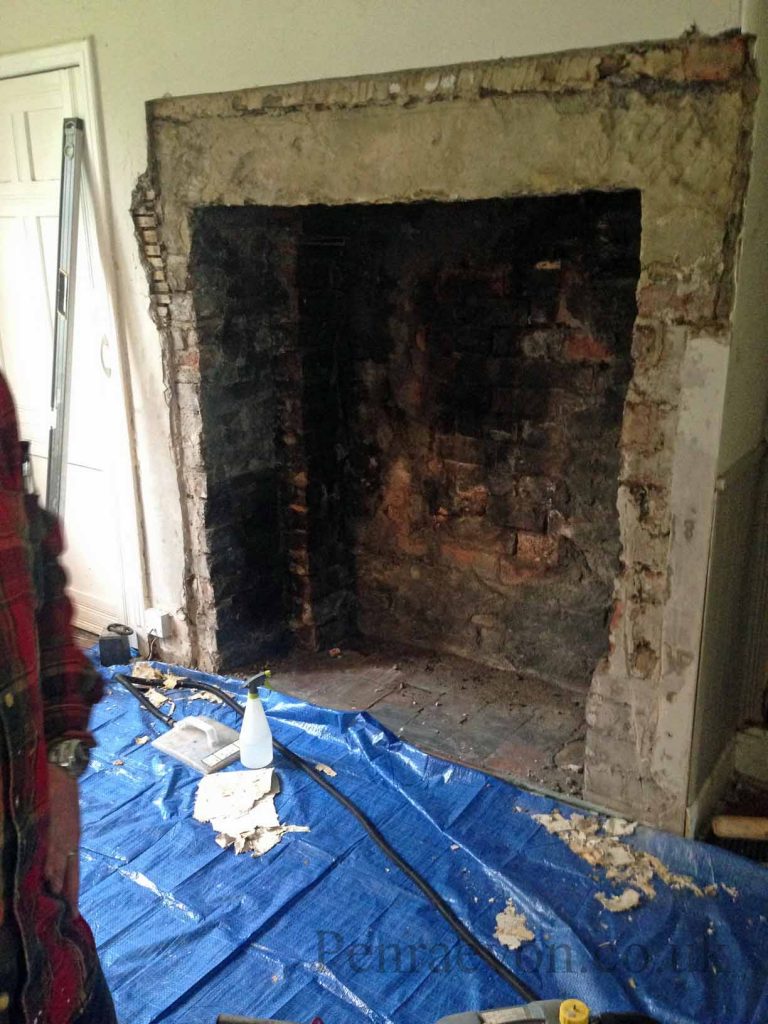 We put on a rough coat first and built up the missing corner. You can see a gas pipe running along the bottom but we had already checked this was dead and we then got the gas fitter to remove it. 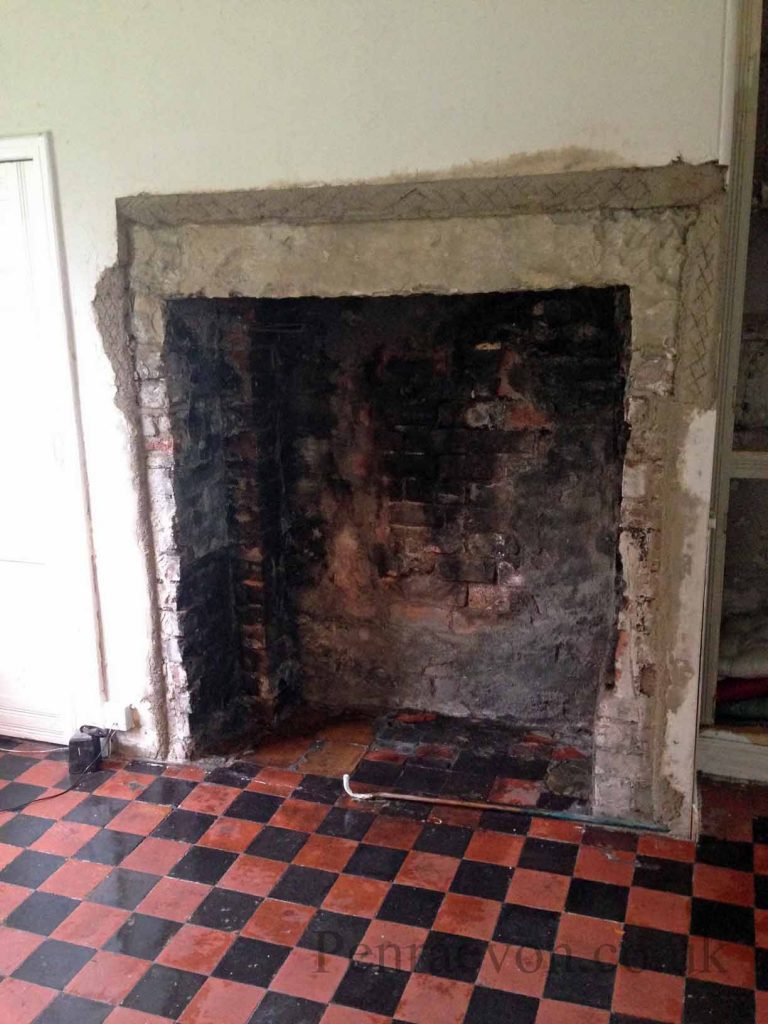 After the rough coat had been left to cure over the week we put another layer on, before putting the finishing coat on – not as simple plastering a curve as doing a straight, flat wall, but pretty happy for a first attempt. 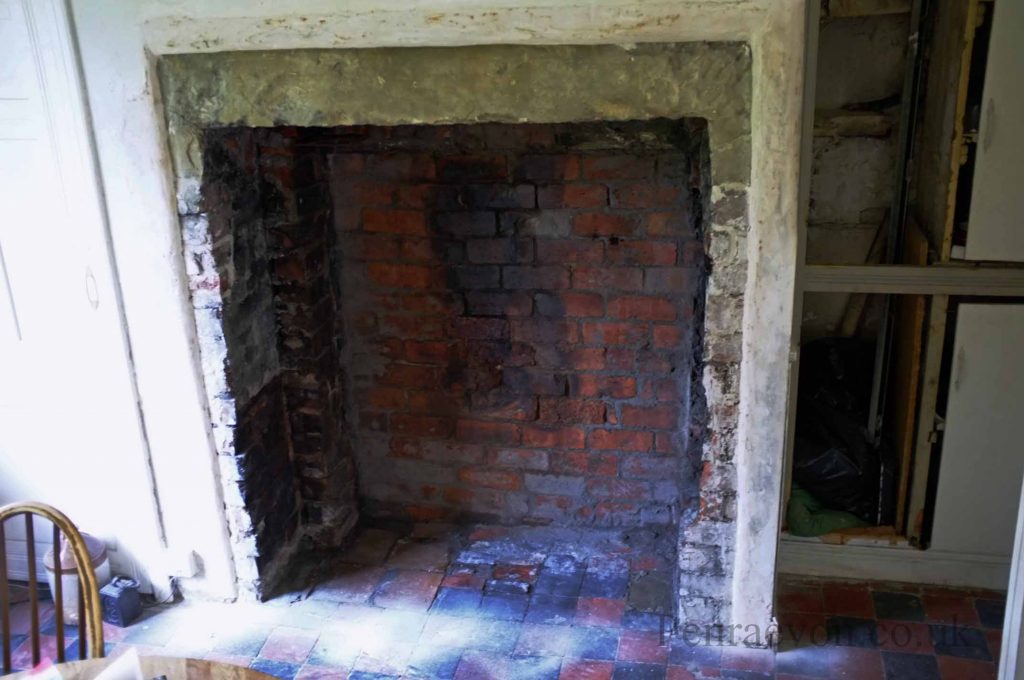 The wood burning stove was then installed by our lovely fire fitter John at Handmade Fireplaces (who are Hetas approved). We decided to stick with the Heta Inspire 45 stove which we had installed in the other two rooms. We have been really pleased with how well and clean it burns (DEFRA Approved as we are in a smoke control area) , this time we opted to get a stand as well.  We did consider getting an Esse Ironheart but the cost put us off  – £4k and that didn’t include installation, I thought we would probably not cook on it and it is not DEFRA approved so we would only be able to burn smokeless fuel.  So it was ruled out as just an extravagance.

The dog was delighted with our decision to install yet another wood burning stove. 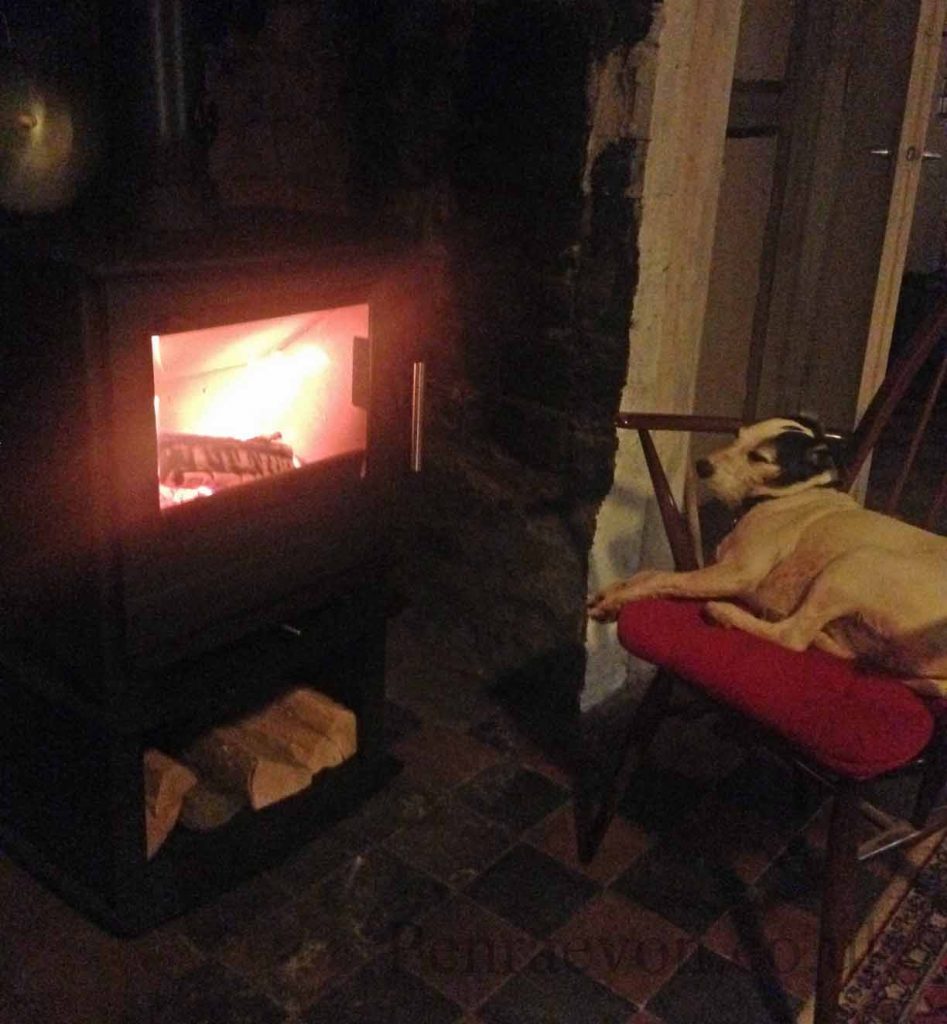 We felt the fireplace needed a surround. We hunted around and found an old off cut of skirting which would make a good shelf and then bought some more skirting and dado from B&Q to build up into the frame. We screwed the frame to the wall and fixed the shelf with brackets – total cost £25. 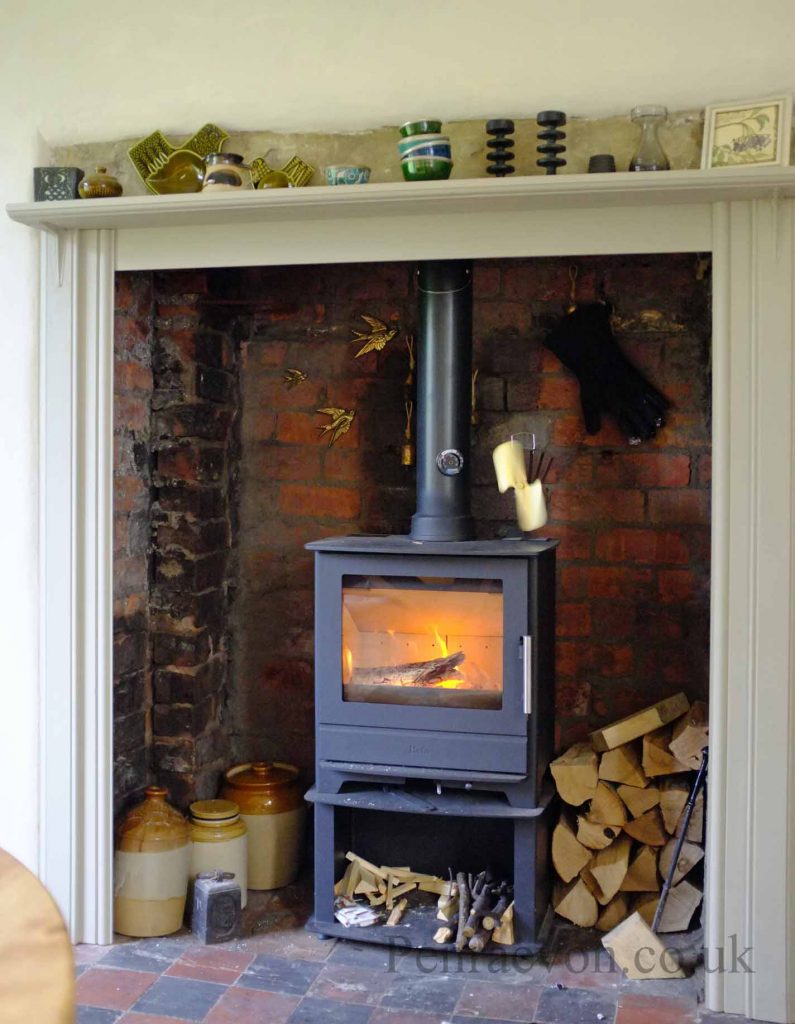 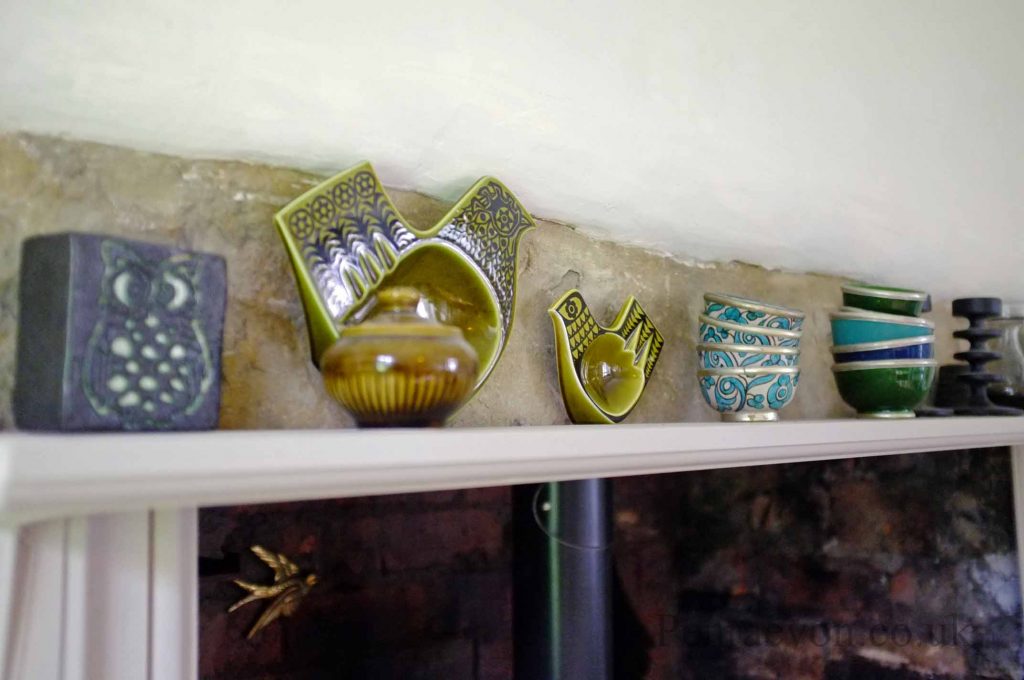 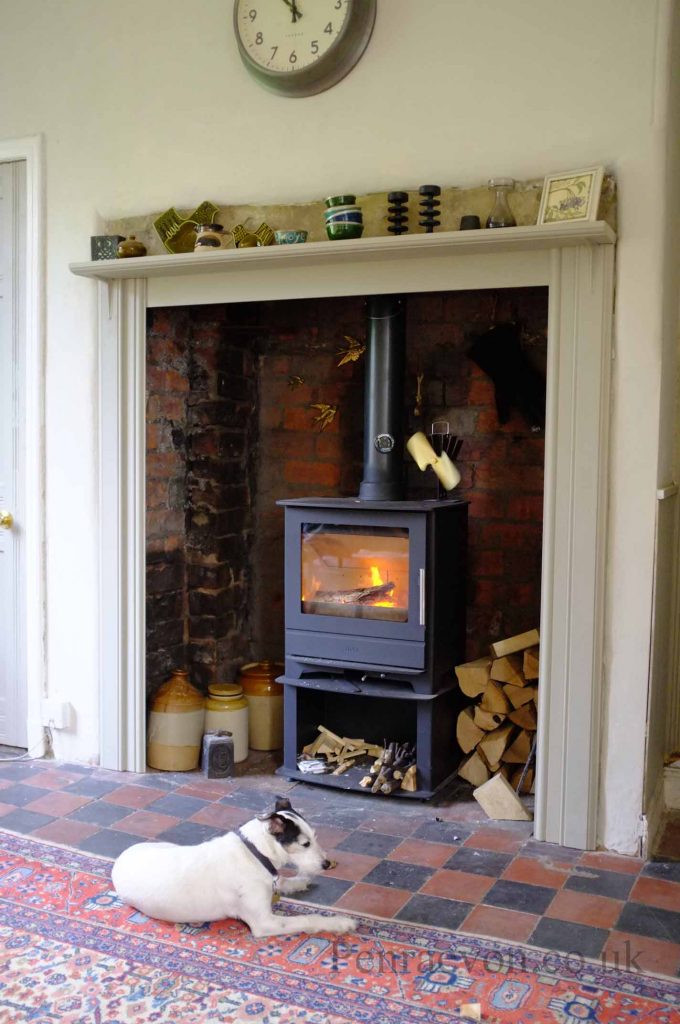 Scampston showing the bare bones. Either we have n

Birthday day out in the sun. Parcevall hall is suc

These quarry tiles were hidden under cement, tiles

Shady greenhouse. I love this structure and they d

Things are bursting into life in the garden #gatde

Illustration of our house complete with the colour

Then the snow fell - such a weird sunny snowy day

Keeping watch over the garden from a comfy chair.

In love with these icestick tulips they are from @

1882 . It was such a delight when we discovered th