The garden room has windows facing East but it also had a west facing wall which could be knocked through to the courtyard. This we hoped would flood the room with light and also allow the warm evening sunshine into the room. Our walls are thick stone with a rubble cavity followed by brick (then lime plaster). After deciding the size and design of the doors we asked our joiners to create French doors to match the original joinery in the house, a rather distinctive design which is echoed in the skirting, the dado , the architrave and the staircase as well as the doors.

Opening a hole in your wall is a frightening process. The builders set about the perfect wall and start demolishing it, whilst asking are you sure this is what you want to do and if it is in the right place. 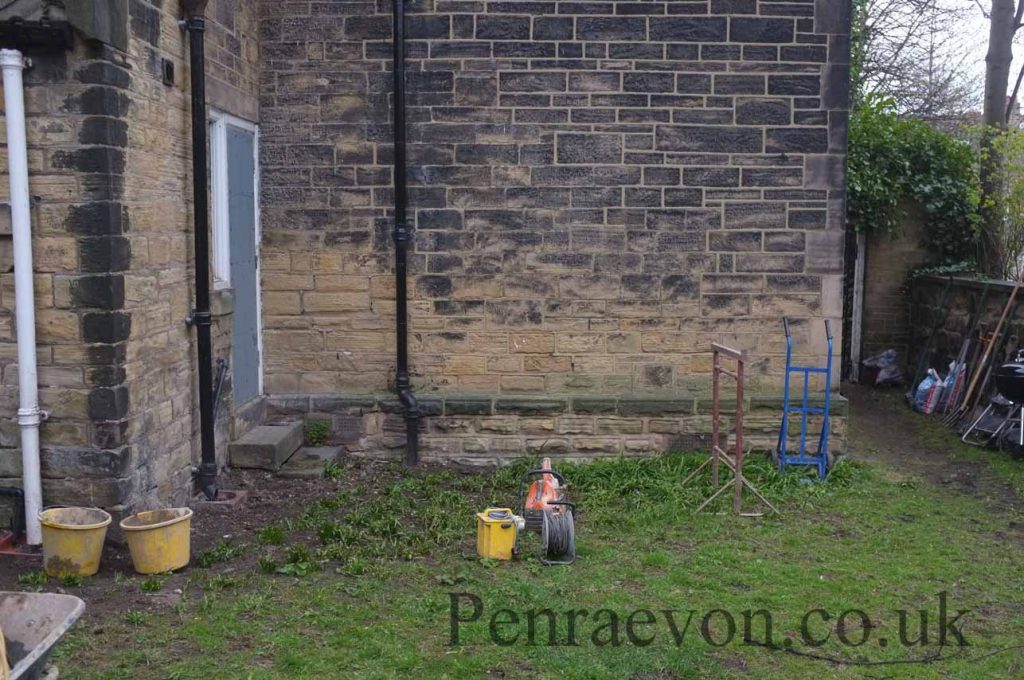 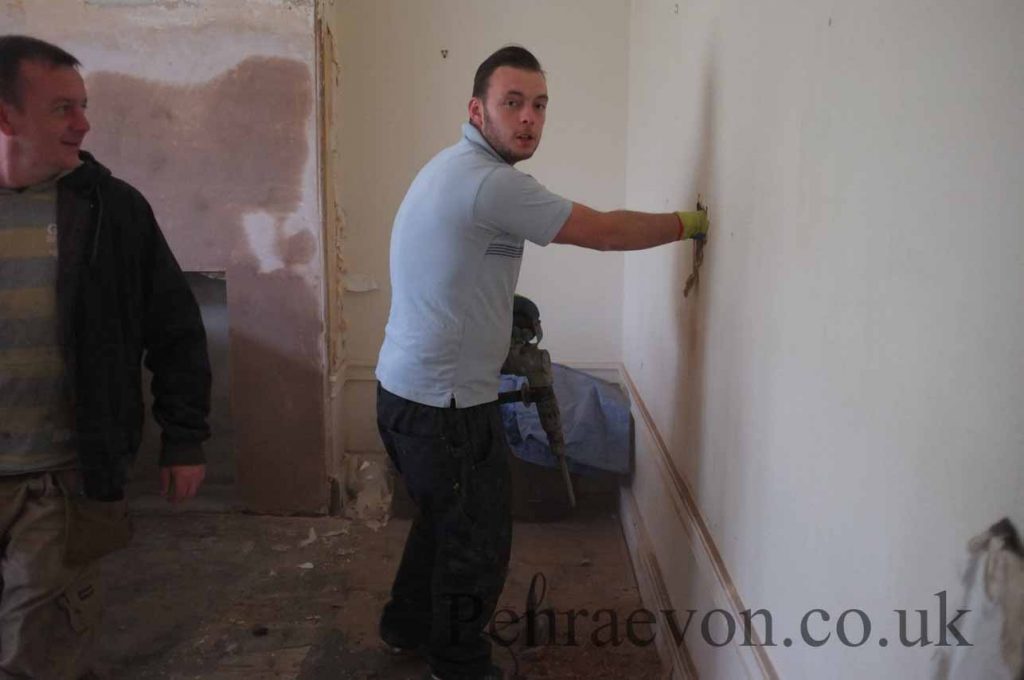 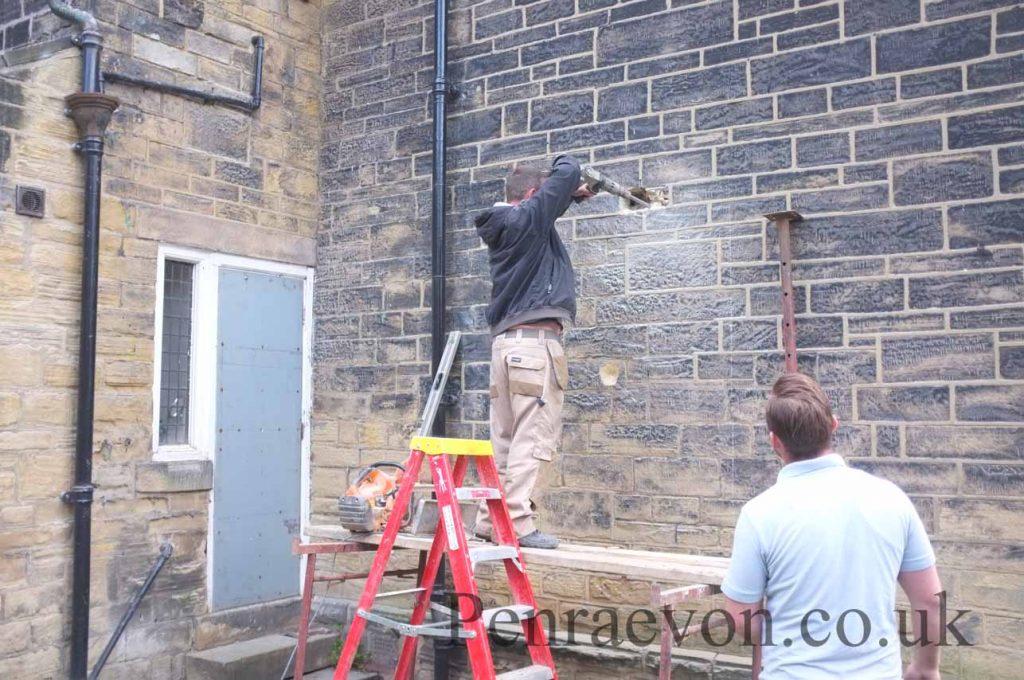 The wall put up a good fight though, after the large sandstones had been removed it revealed not so much a rubble cavity as expected but instead a dry stone wall construction. Once through this they had to break through the solid bricks. 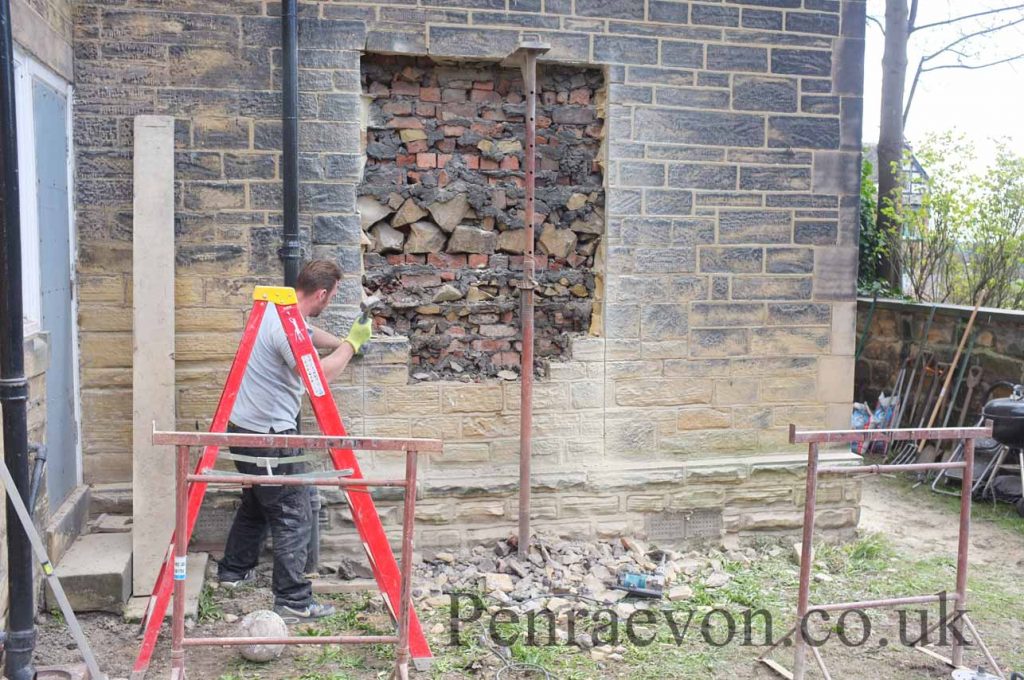 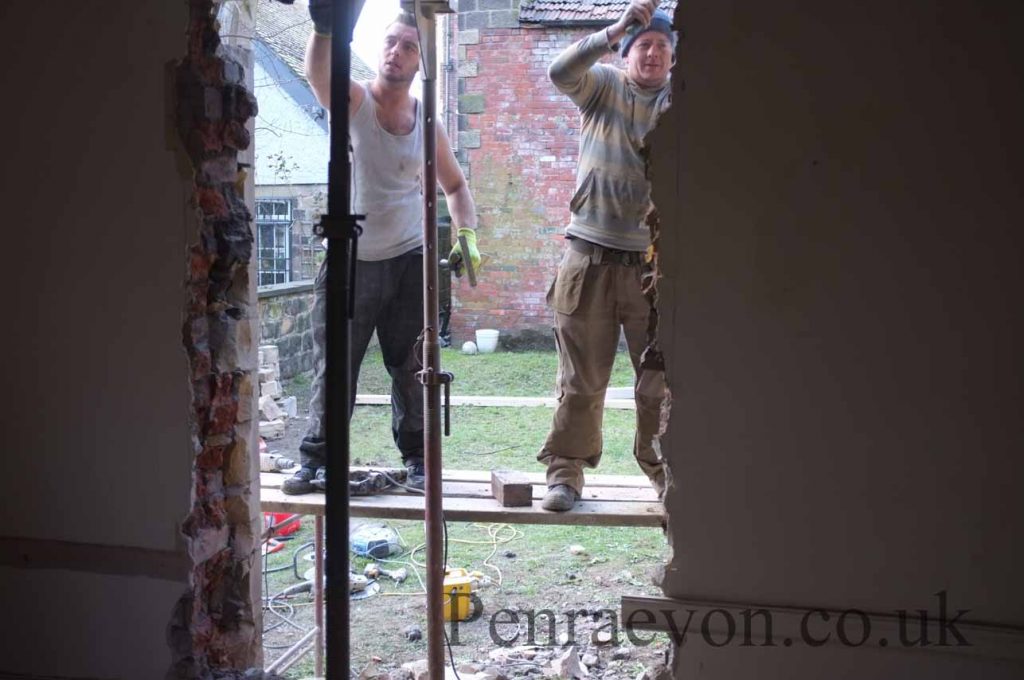 A stone lintel was put on the outside to match the rest of the house and this was strengthened with two reinforced concrete lintels, on the inside. The Building Inspector was called out to check the work and it was passed (phew). 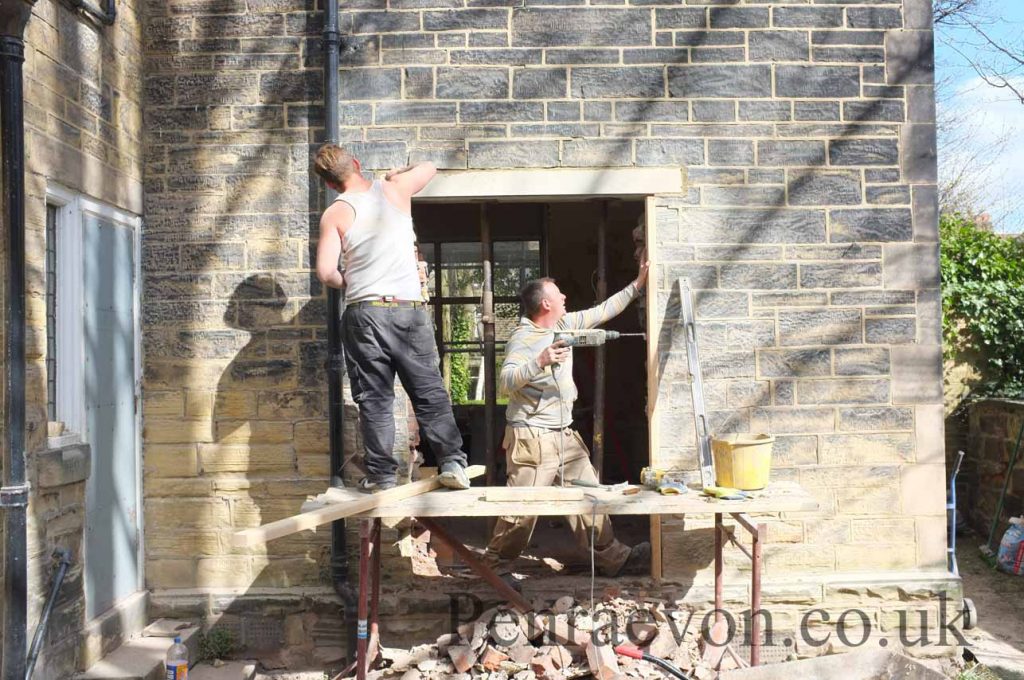 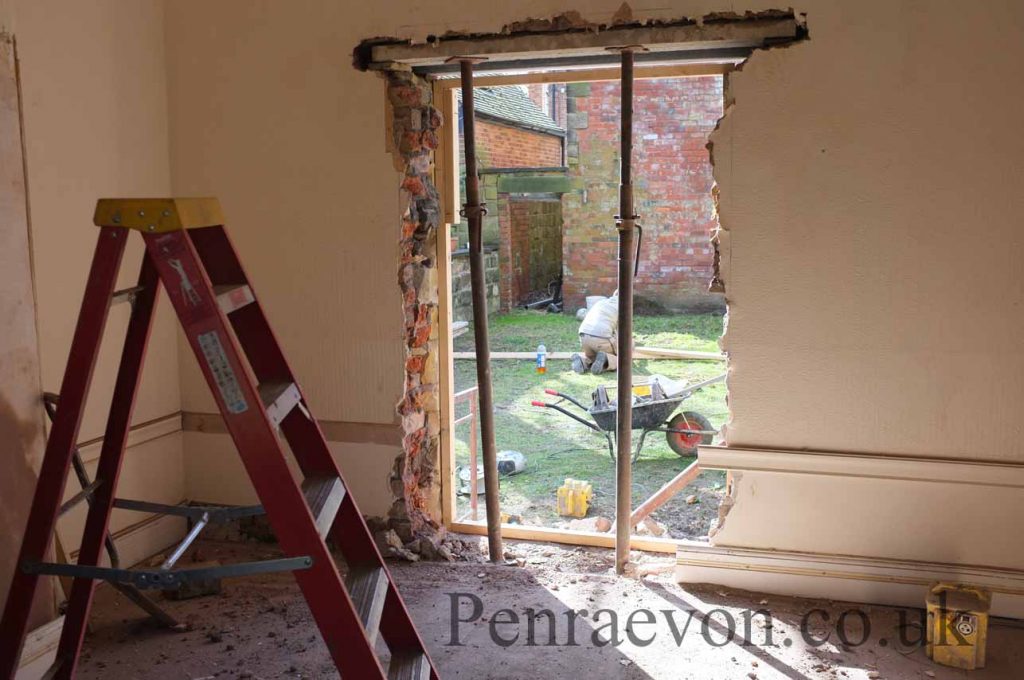 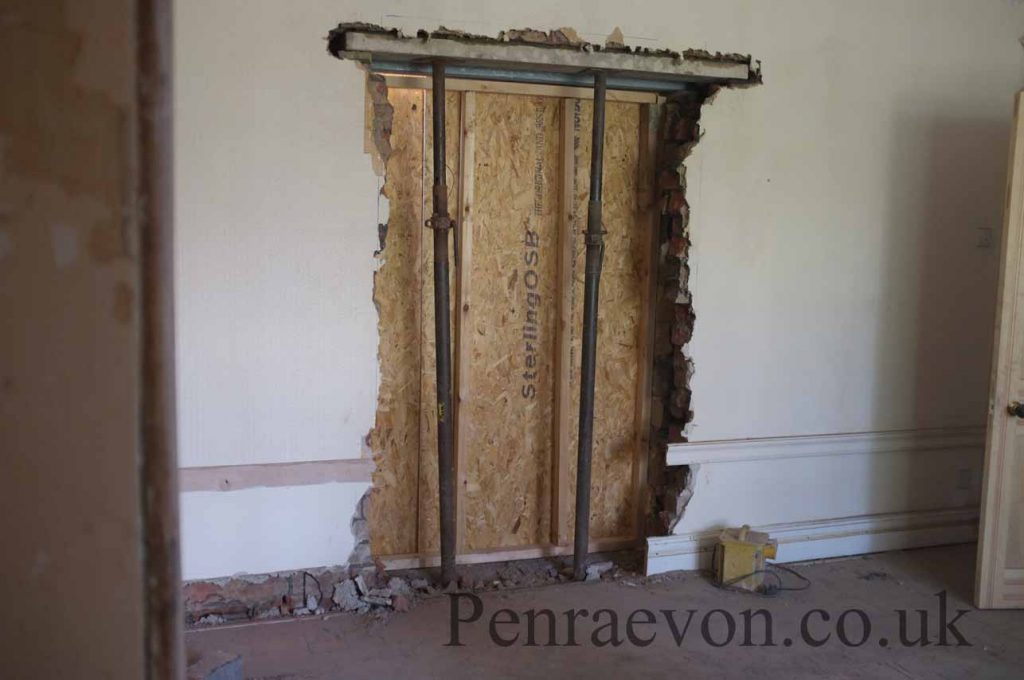 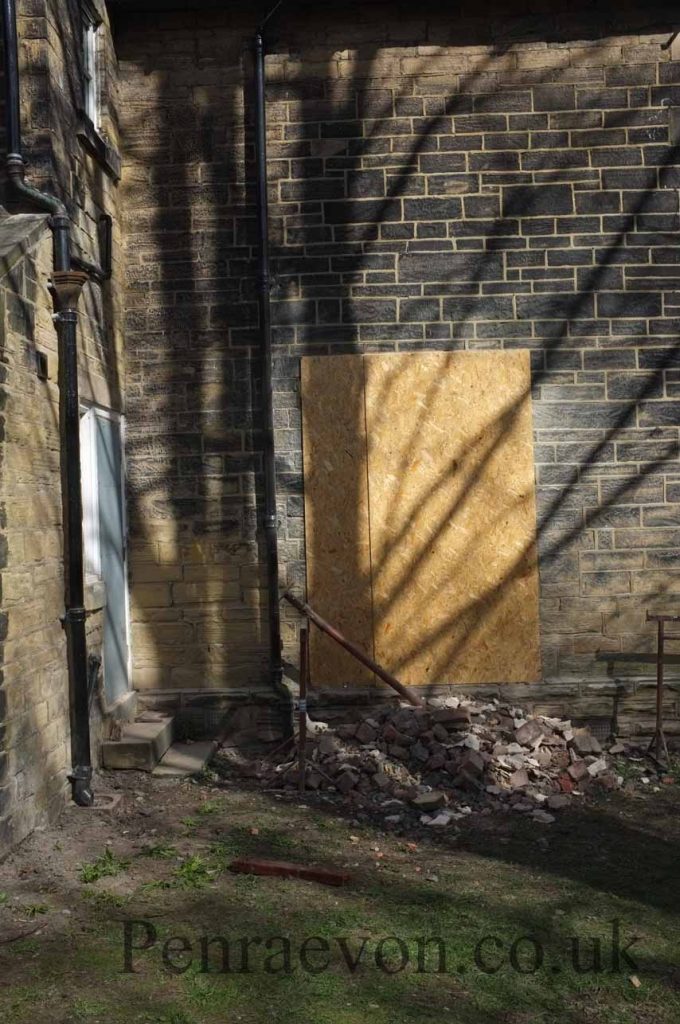 Once we had recovered from the destruction of the builders, we were left with a boarded up raggedly hole. The joiners who made the doors and frame were also fitting the brand new doors. The French doors were going to be glazed with leaded glass to match the other windows in the room, so temporarily they had first nothing in and then secured with chipboard. The joiners had to chisel out the stone to get the frame to fit precisely. 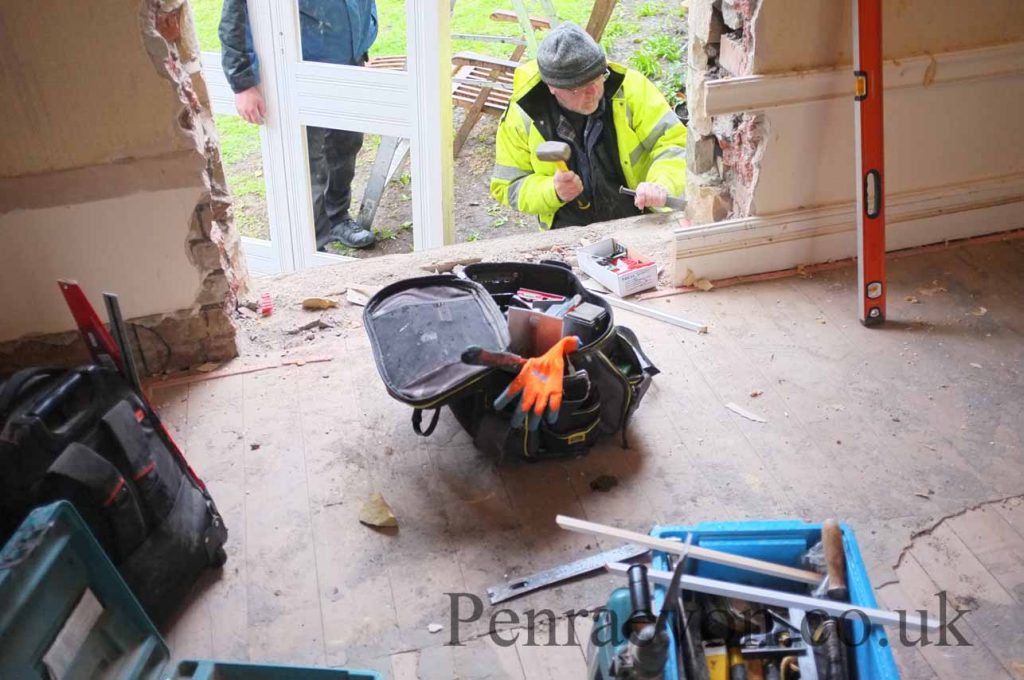 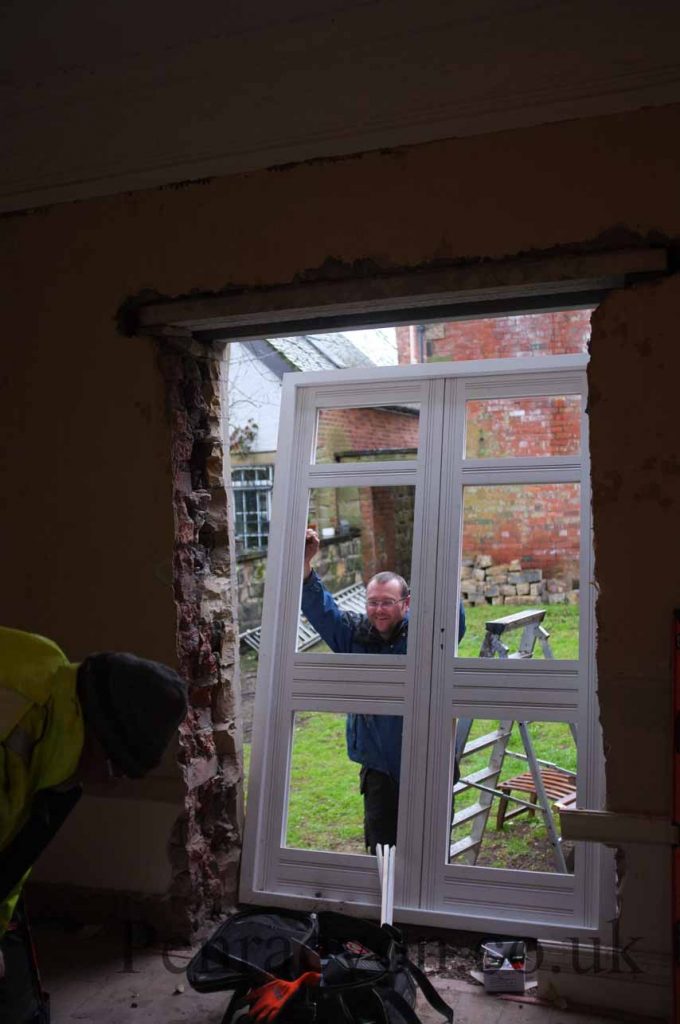 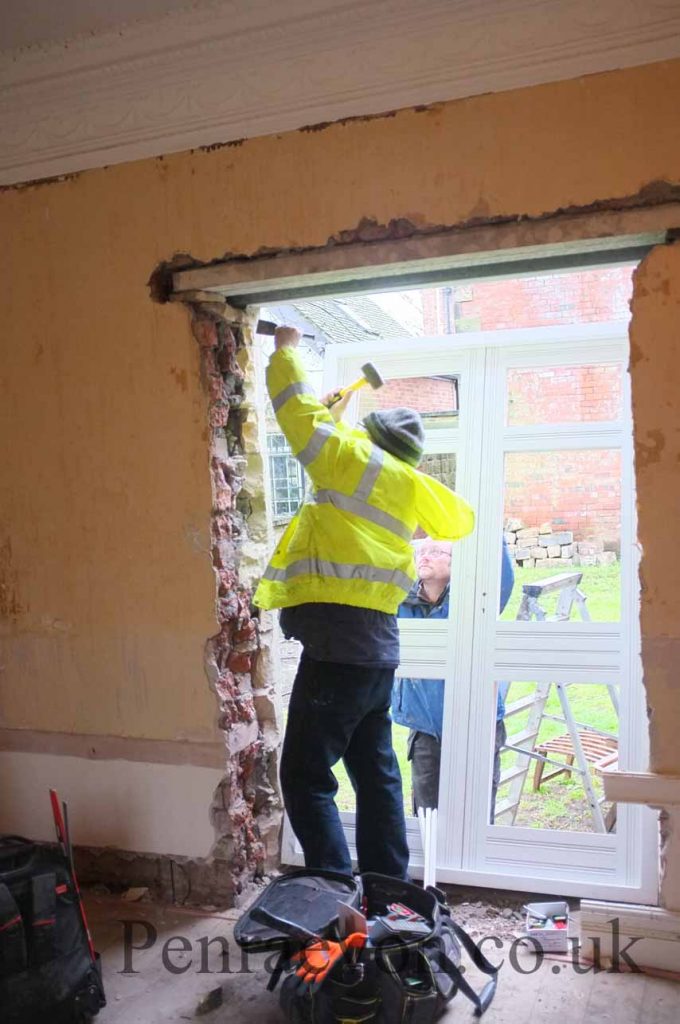 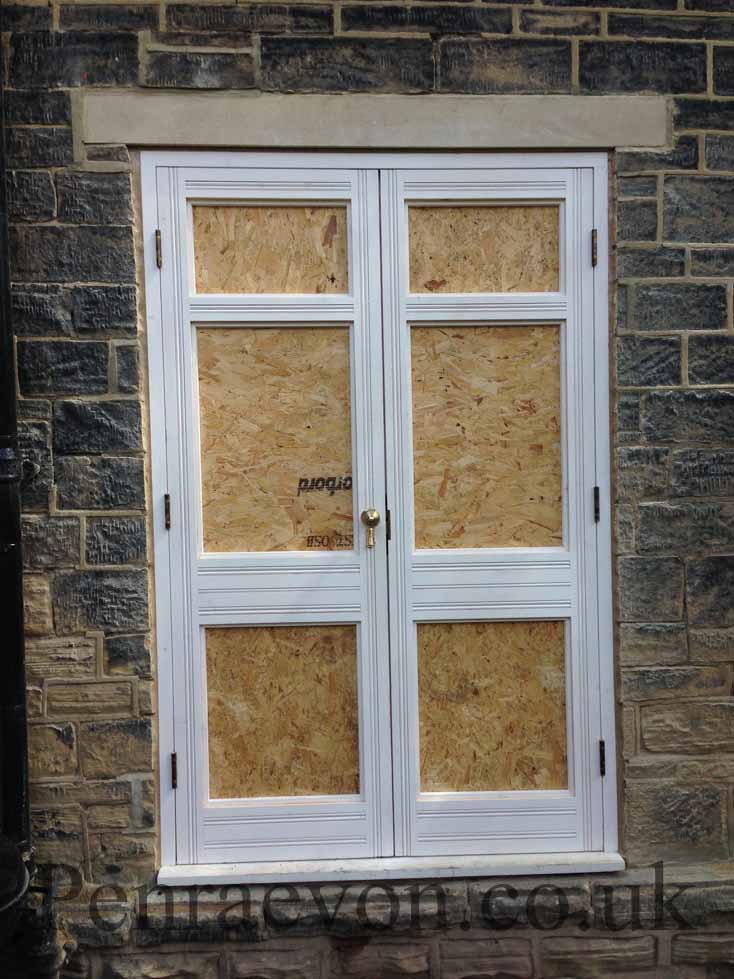 With the doors in place it was time to turn our attention to the glass. The glazing had to be created to match the original glazing in the bay window in the same room. The leads were created out of old glass and then encapsulated in security glass and k glass to comply with building regulations. 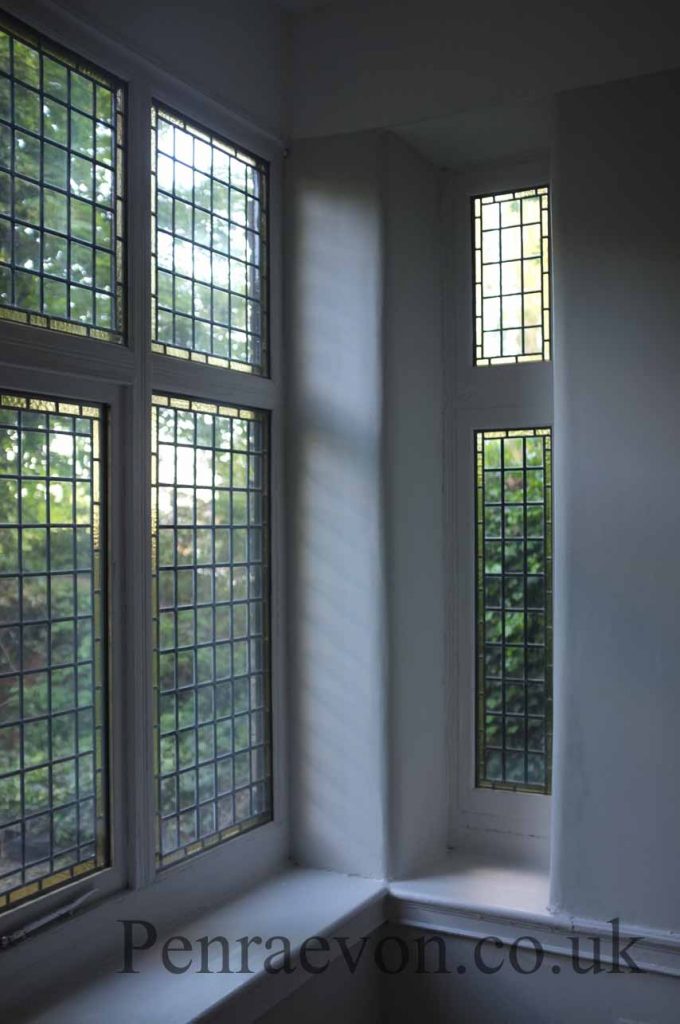 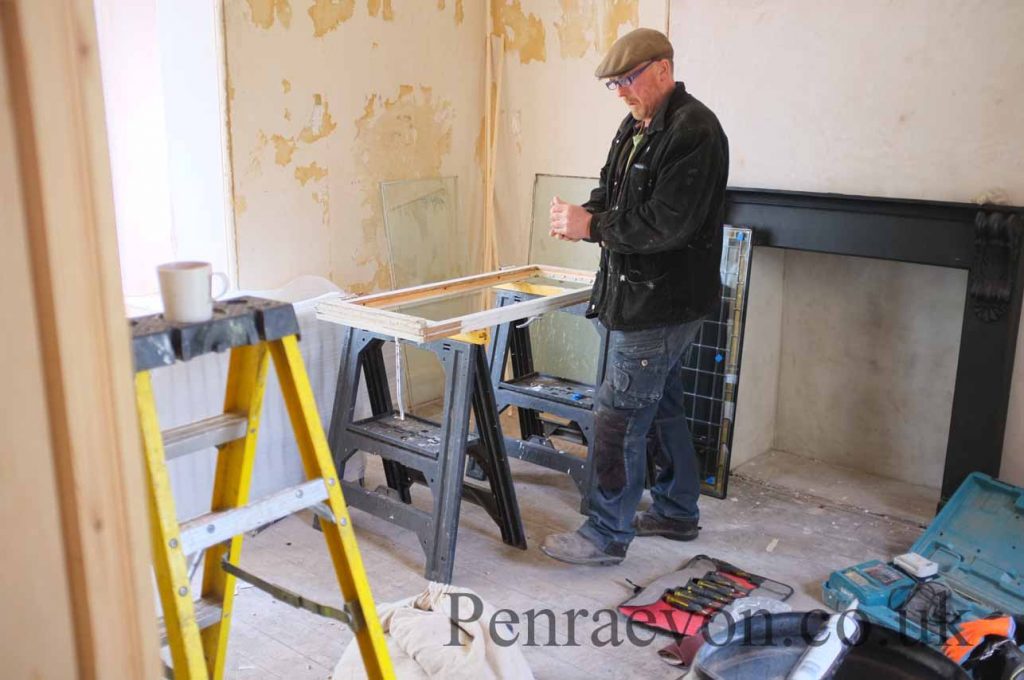 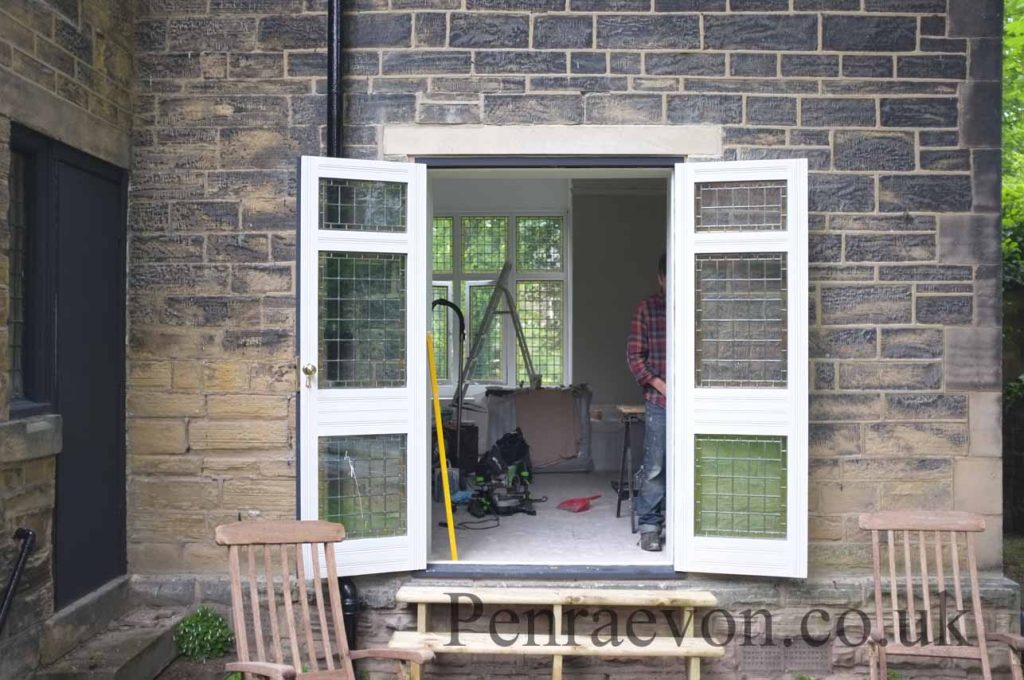 Finishing touches sounds like easy light work, but alas it was not to be.  The plastering was a challenge as the depth of the wall is around 25cm and is not comprised of one material, but our plasterer rose to the challenge and by packing out and then double boarding he was able to create a neat hole, we also re skimmed the entire wall that the hole had been cut out from.

The joiners had made architrave to match the door. This needed to be put up along with the dado and skirting (all had been removed whilst the hole was made). The architrave, skirting and dado are all screwed onto the wall to ensure that they don’t warp or move over time. This is then filled and painted so the screws disappear. 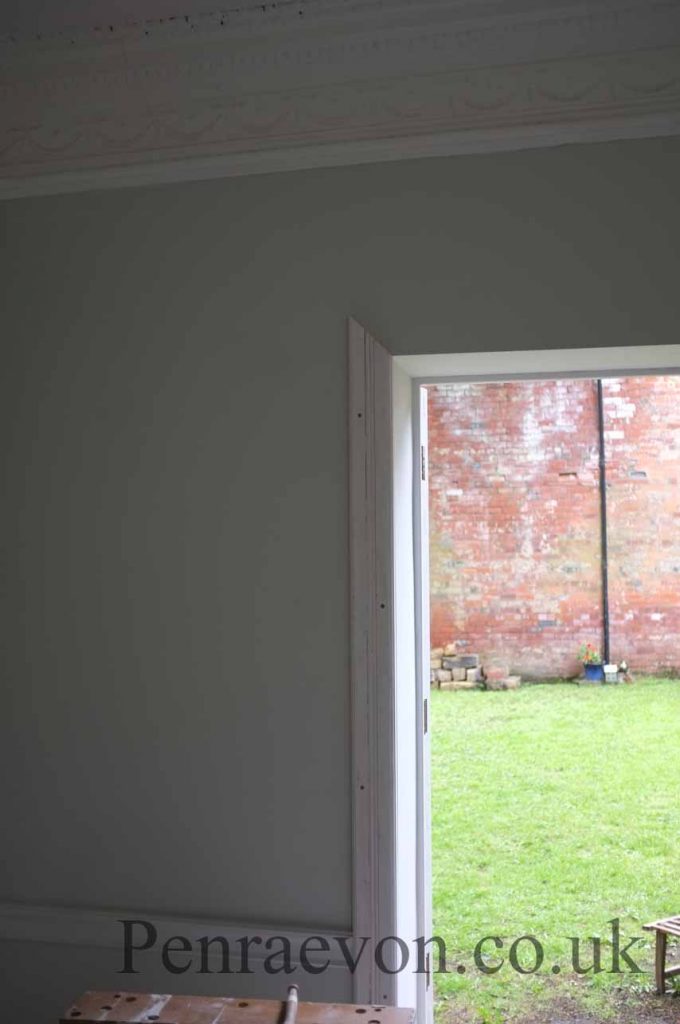 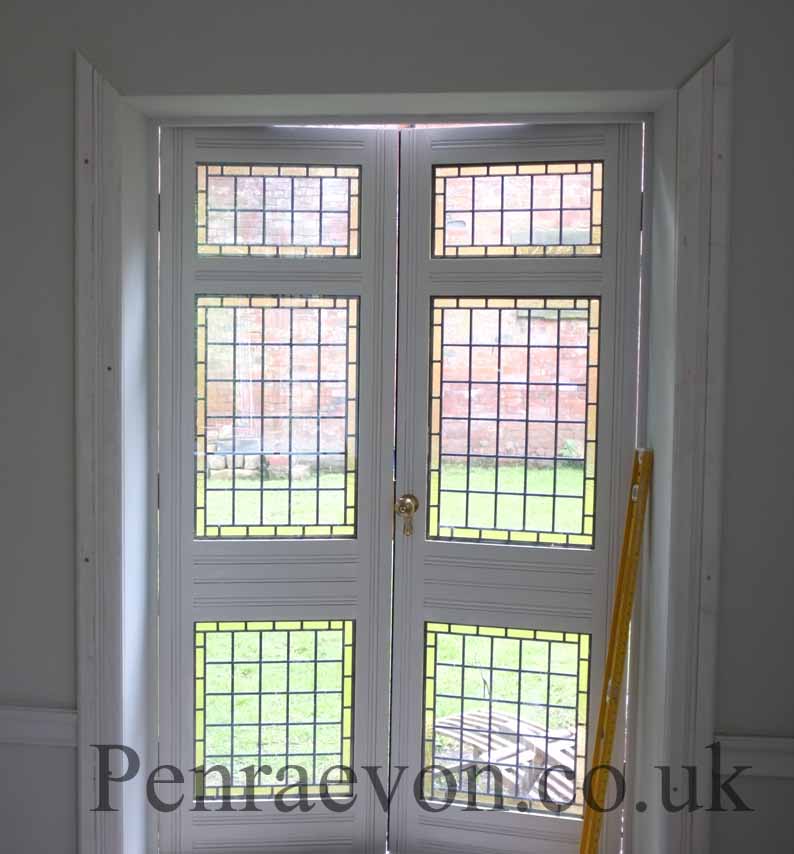 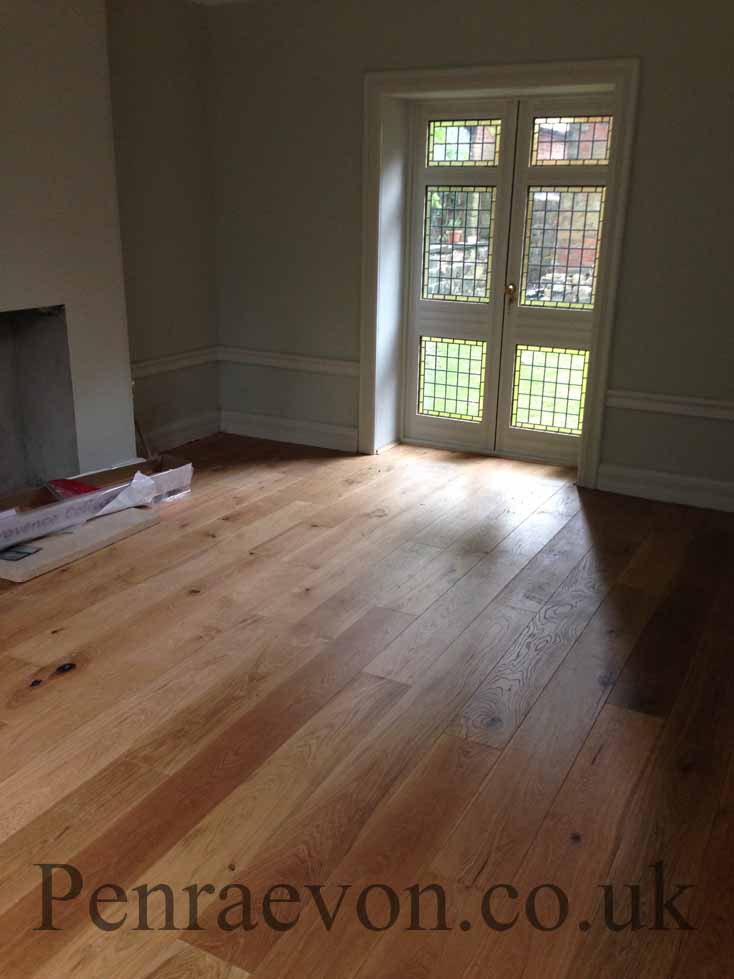 Not the cheapest of ways to create French doors but they are very strong, beautiful and match the house perfectly, just need to get some stone steps made to finish the project off . Until then these wood ones will suffice, and the dog is happy with his new sunbathing spot. 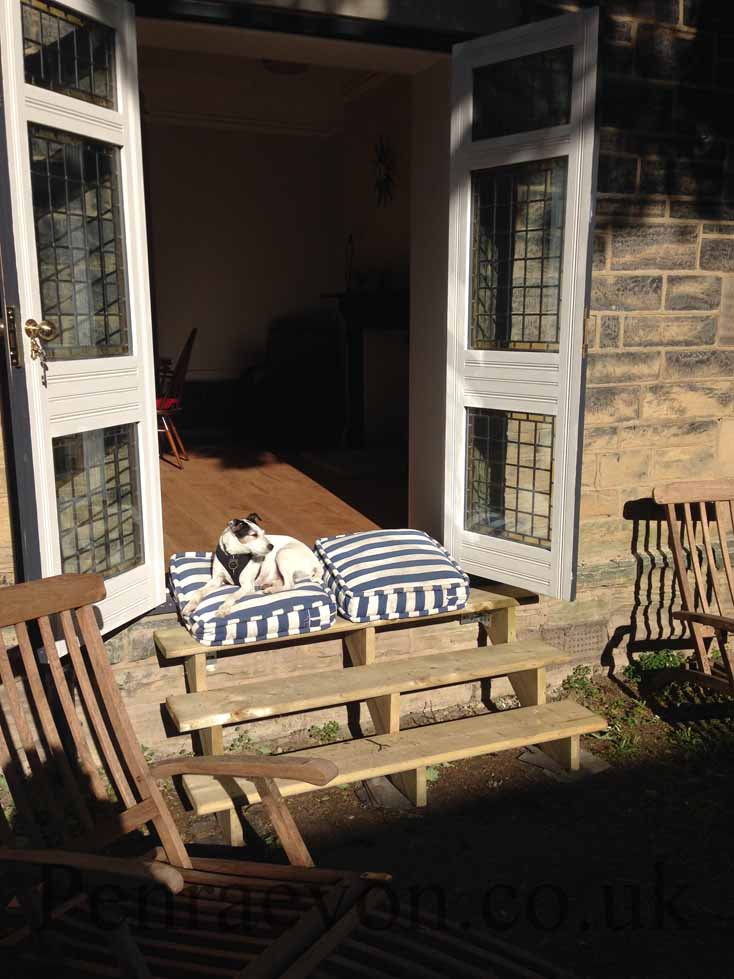