What do we do with an old Coal Store?

To the side of our house is a stone and brick extension.  You can see it on the 1911 maps of the house, complete with its steps. Inside it has steps which seem to lead nowhere (we have no cellars). The steps have been filled with building rubbish over time, so we haven’t been able to investigate fully. We think it was the original coal store and coal was delivered though a chute to the side. It has then been extended at a later date in 3 courses of brick (we don’t have any other external brickwork on the house – just stone), it has electric lights (not working now) and a thick reinforced concrete roof. It is an oddity and  the partially demolished bricks make it an eyesore. 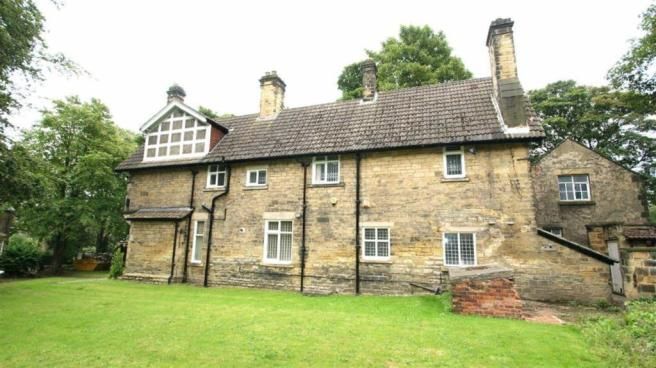 We have come to the conclusion that the coal store was probably extended and strengthened in the 2nd World War to create an air-raid shelter. Mr Acfield (who was Leeds City Engineer) was living in the house during WWII and we have a newspaper report of him giving advice on how to build air-raid shelters correctly. It seems that for his family he re-purposed the coal hole. Although this was of great use during the 2nd World War we hope that we won’t have need for it anymore, so coal store to air-raid shelter is a development we won’t be keeping.

The previous owners re-purposed it as an air raid shelter, which we have no use for, however I have always joked that I would like a smoke house . I would use it to cold smoke fish, meat, salt and butter. Practically though, I think we will probably just use it as garden storage. Whatever it ends up becoming, it needs a lot of work to get it usable again.

The first stage of renovation was to get the reinforced concrete roof removed (concrete with metal bars running through it) . We wanted it removed because it was ugly but it was also built up over the sill of the window and was causing damage to the window frame.  Fortunately we had the roofers on site repairing the back of the house so we roped them in! They cut the concrete into slices, hammered wedges in to break the concrete into pieces and then removed each piece. It took two of them a whole day to remove the concrete slab but they seemed to enjoy the challenge. 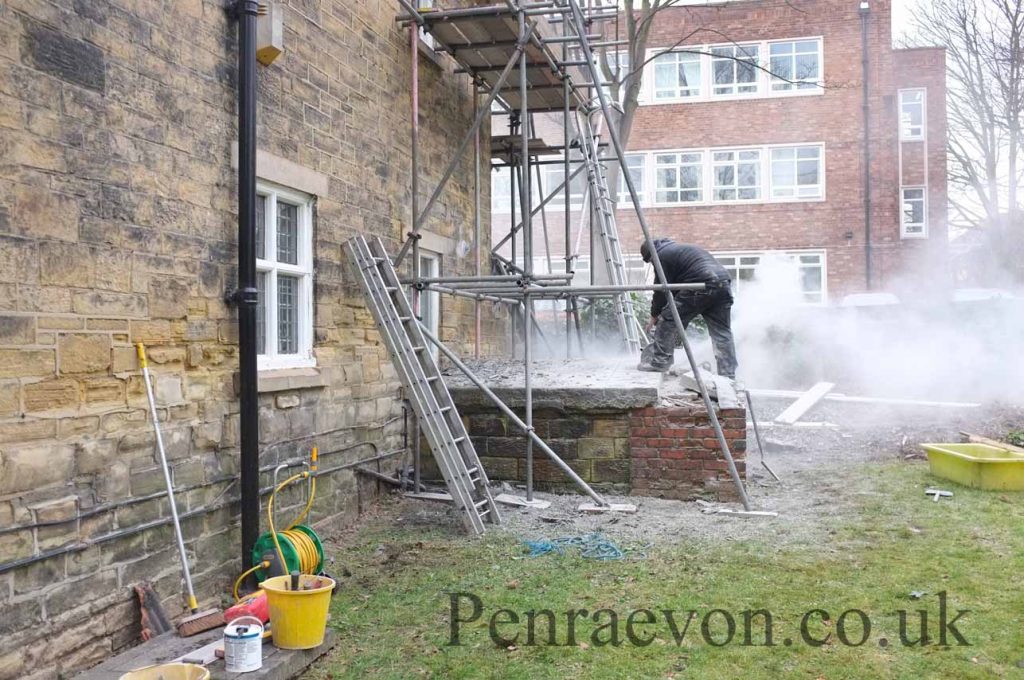 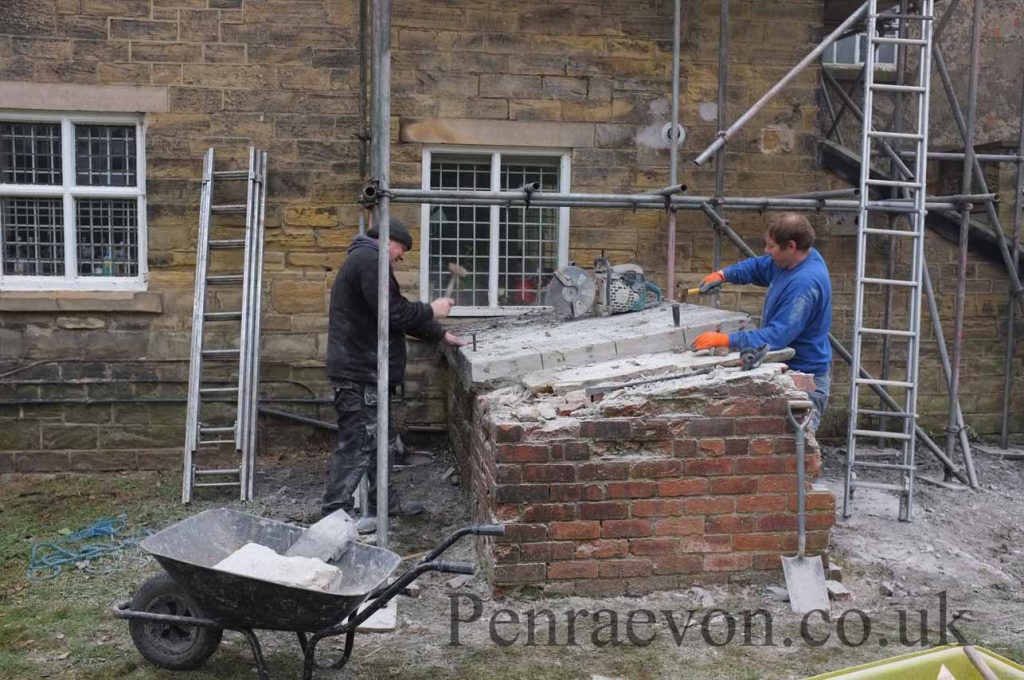 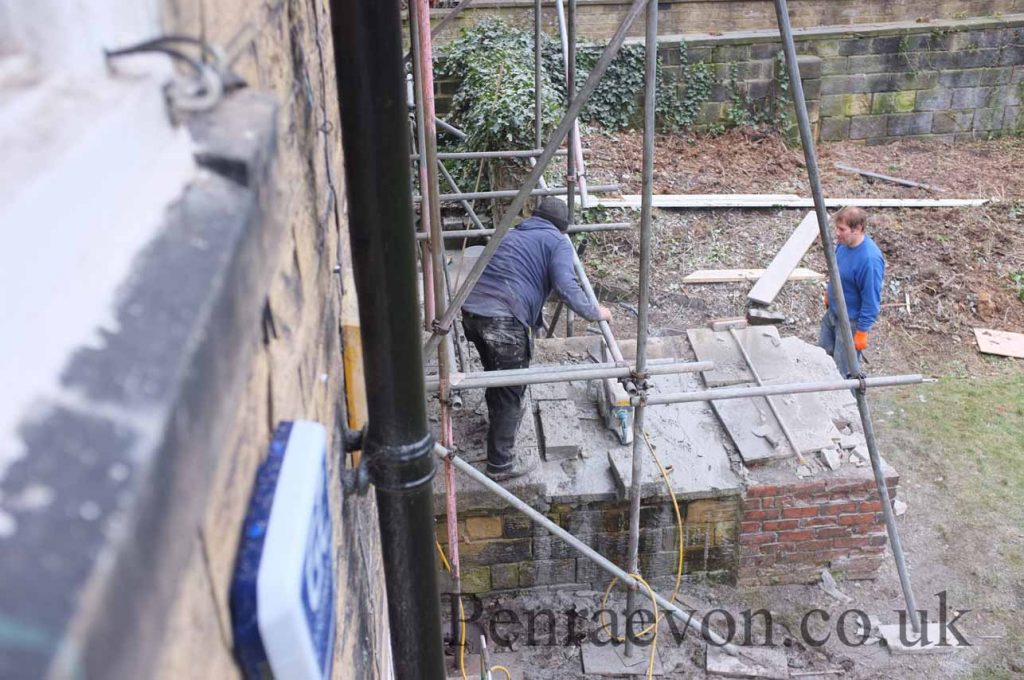 Under the concrete roof we revealed a beautiful pristine undamaged Yorkshire flag roof with one drain hole in it and maybe a chimney hole? Perfect for creating a smoke house. 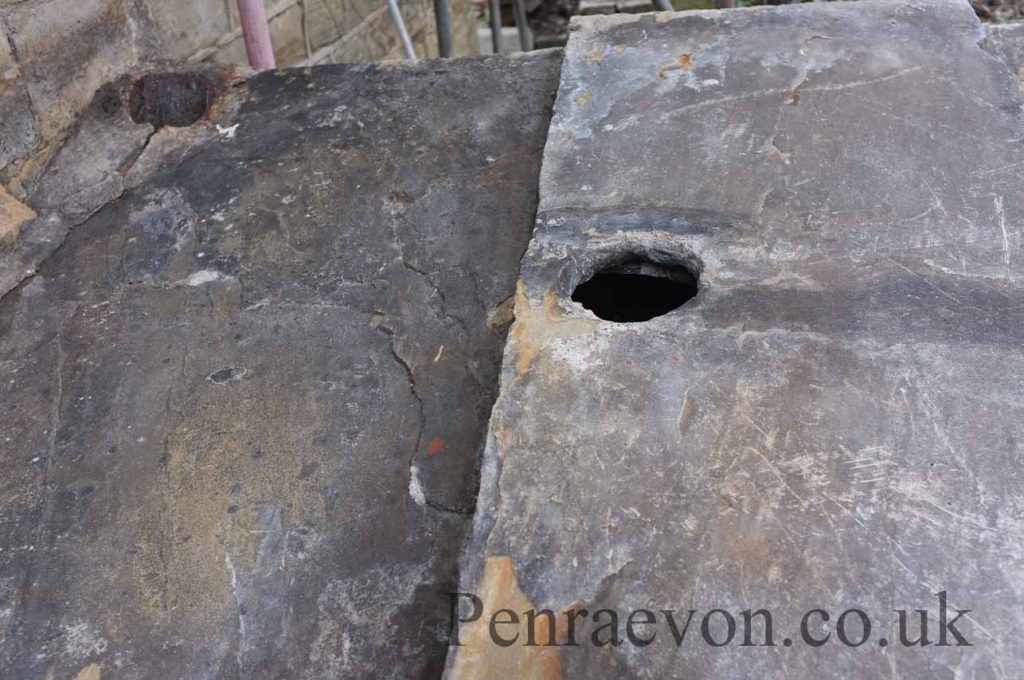 The inside of the structure had been used to dump building rubble by previous owners of the house. 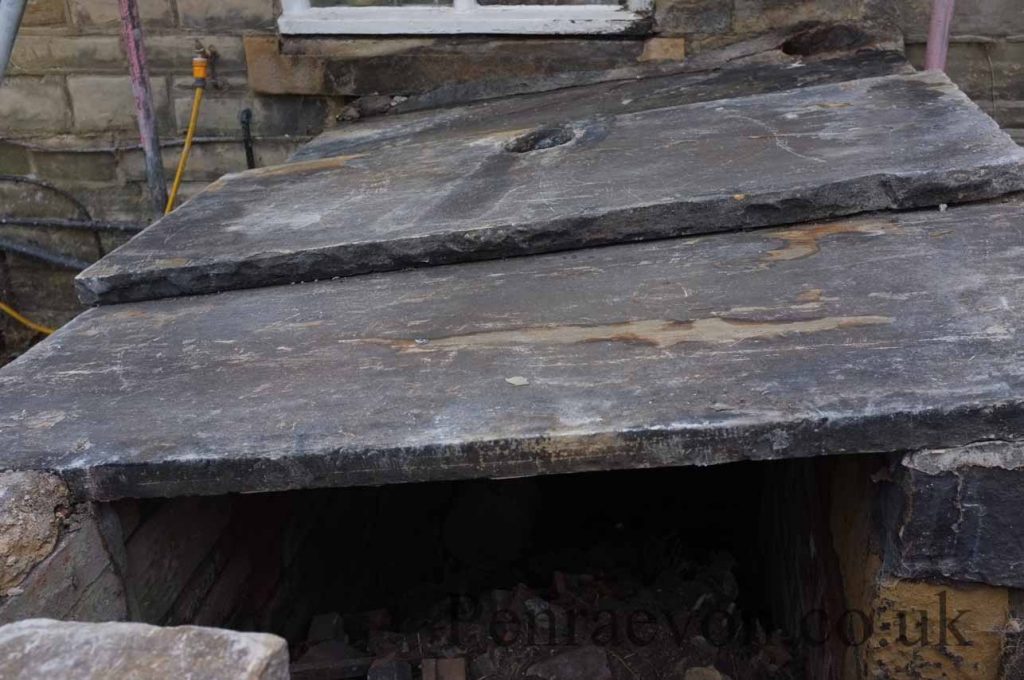 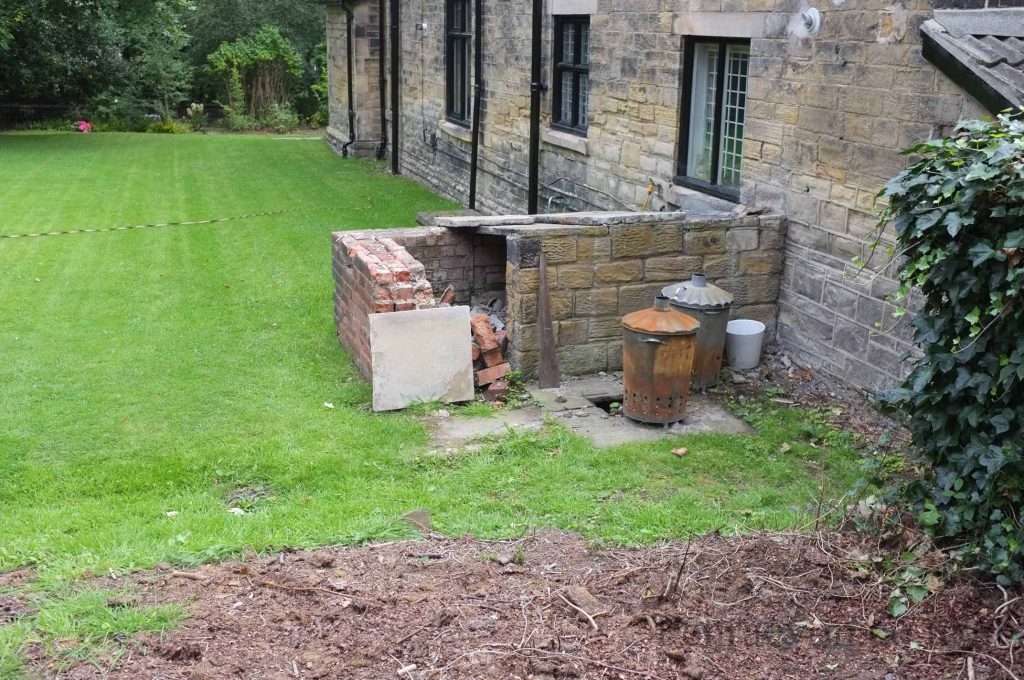 We have now demolished the rest of the brick extension, again leaving all the stonework pristine.  The bricks weren’t tied into the original stonework at all. The bricks were made by whitakers of leeds who produced bricks in this design between 1929 and 1949, which together with the way the wall was constructed supports our theory that it was a WWII bomb shelter and a late addition to the house. 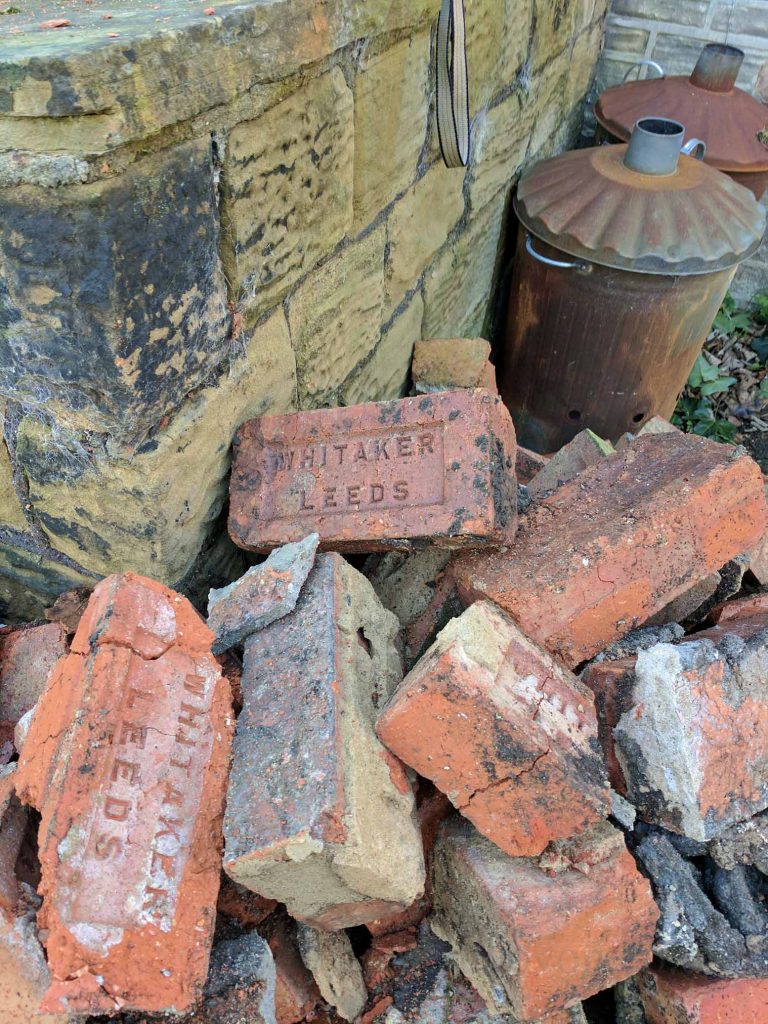 It’s going to look pretty cute when the rubble has gone! 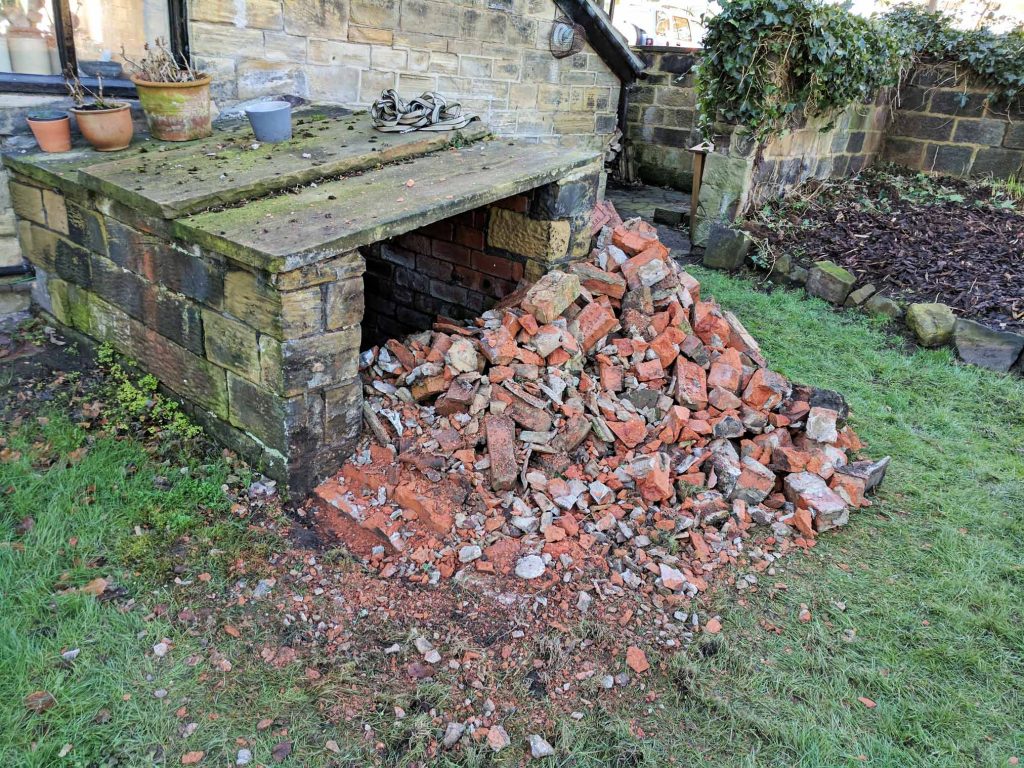 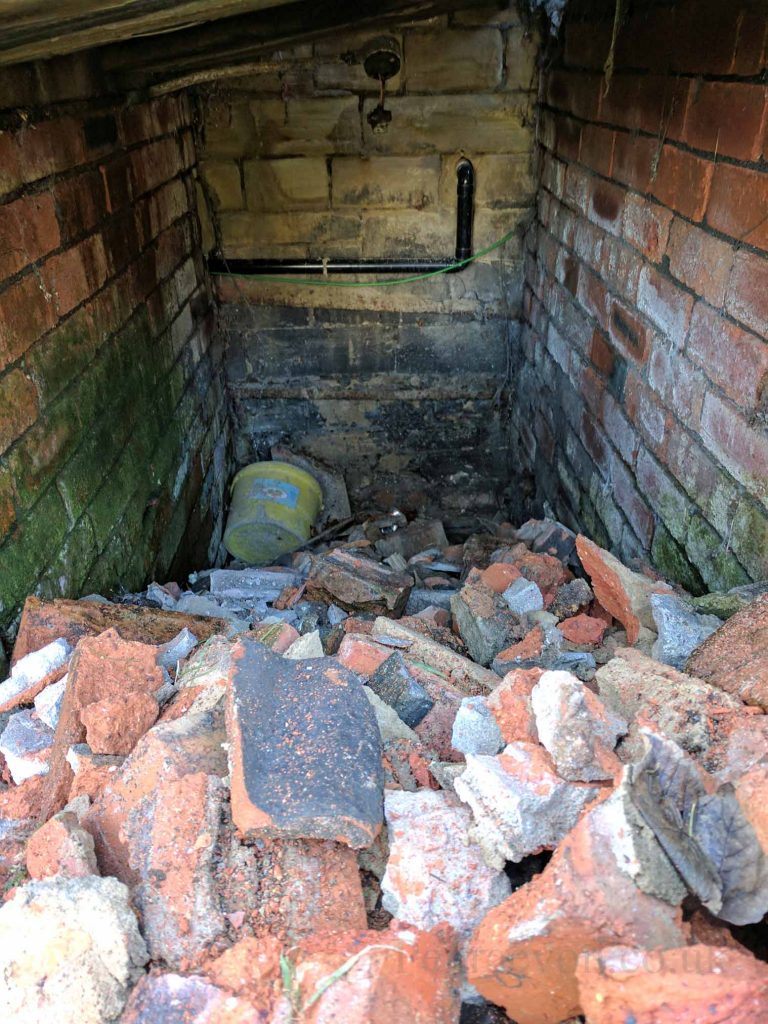 So what will it become? a smokehouse? more garden storage (we already have an outside loo)? a garden grotto? First all the rubble needs to be cleared away, which should be the end of this week.