Although we are very close to the city we are surrounded by wildlife. We have Red Kites, Owls, Woodpeckers, Jays, Woodpigeons and all types of Finches and Tits (my favourite birds are the Thrush, Wren and Blackbird who fill the air with their song). There are bats flying around on a summers evening (they may fly all year but that is the only time we are sat out to see them), foxes and hedgehogs all cross the streets at night. There also countless bugs, moths and butterflies. One of the downsides of taming the garden is that you destroy some of their habitat, food stores and shelter.

The back lane used to be overgrown with Ivy and Blackberries. It made an impressive hedge. As we tamed our own garden we wanted to reduce the ivy and bramble invasion from over the wall whilst still creating a wildlife corridor. We planted rambling roses on the garden side of the wall but the Ivy was keen to take over from the other side. (a sunbathing neighbourhood cat has sat in the picture to give it scale). 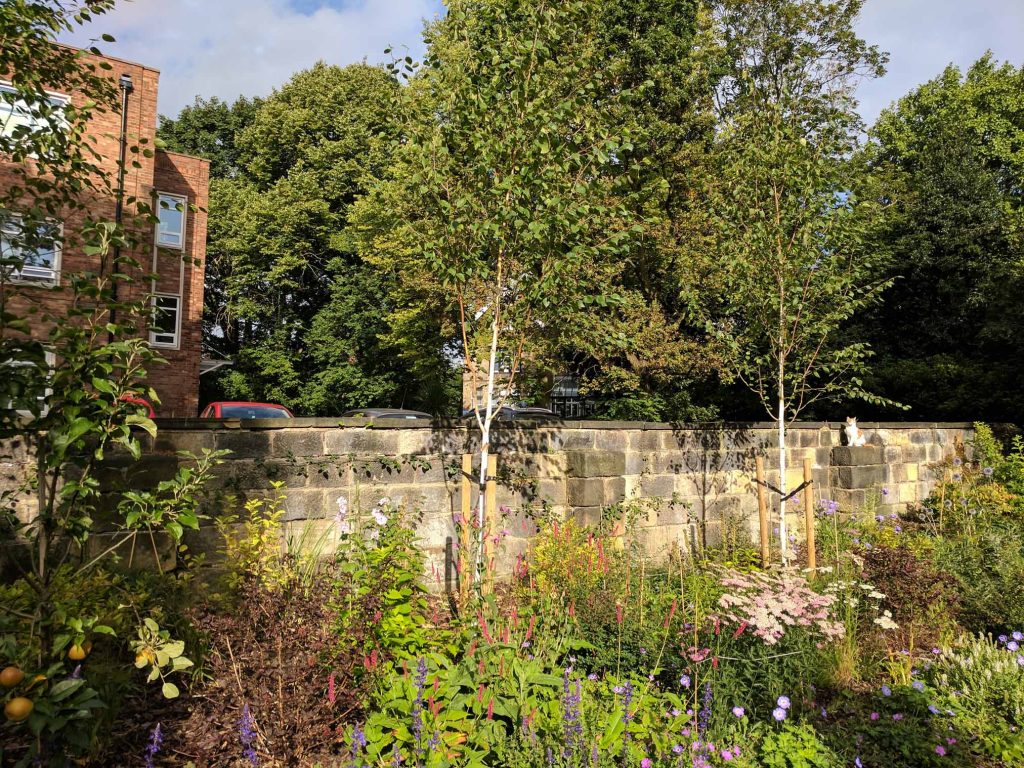 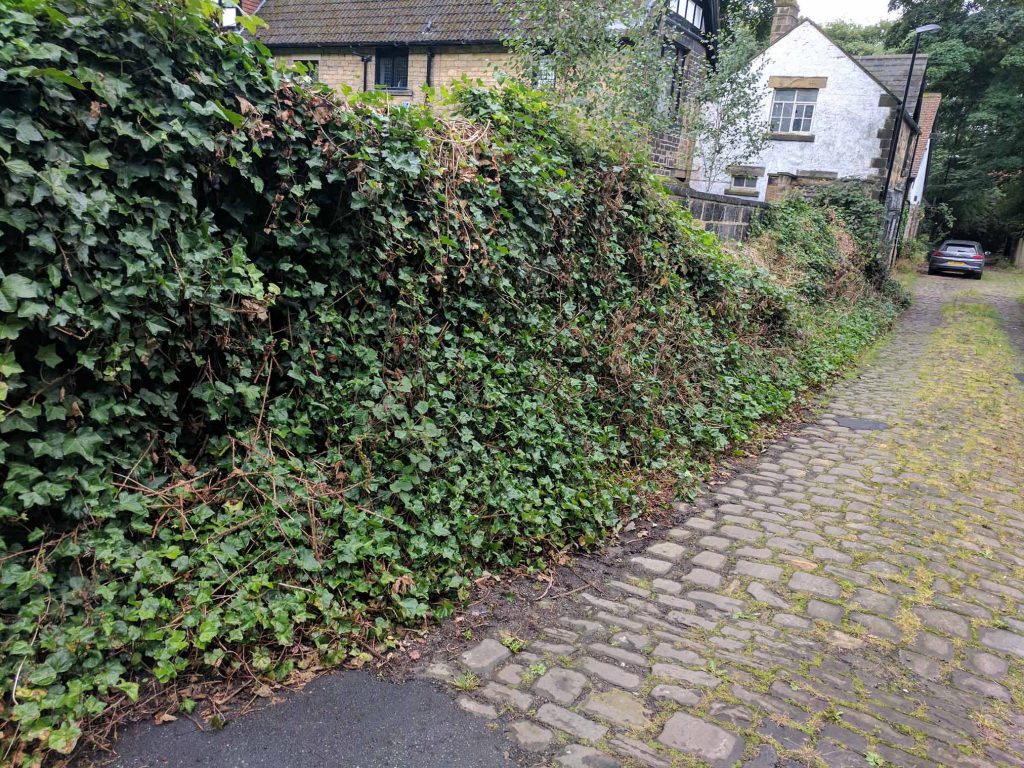 The plan was to pull back all the ivy to die down slowly and naturally before cutting it all back and clearing the space. The stones revealed are so large it makes the wall look short but it is actually 7ft high and 17m long (good mix of Metric and Imperial there!) 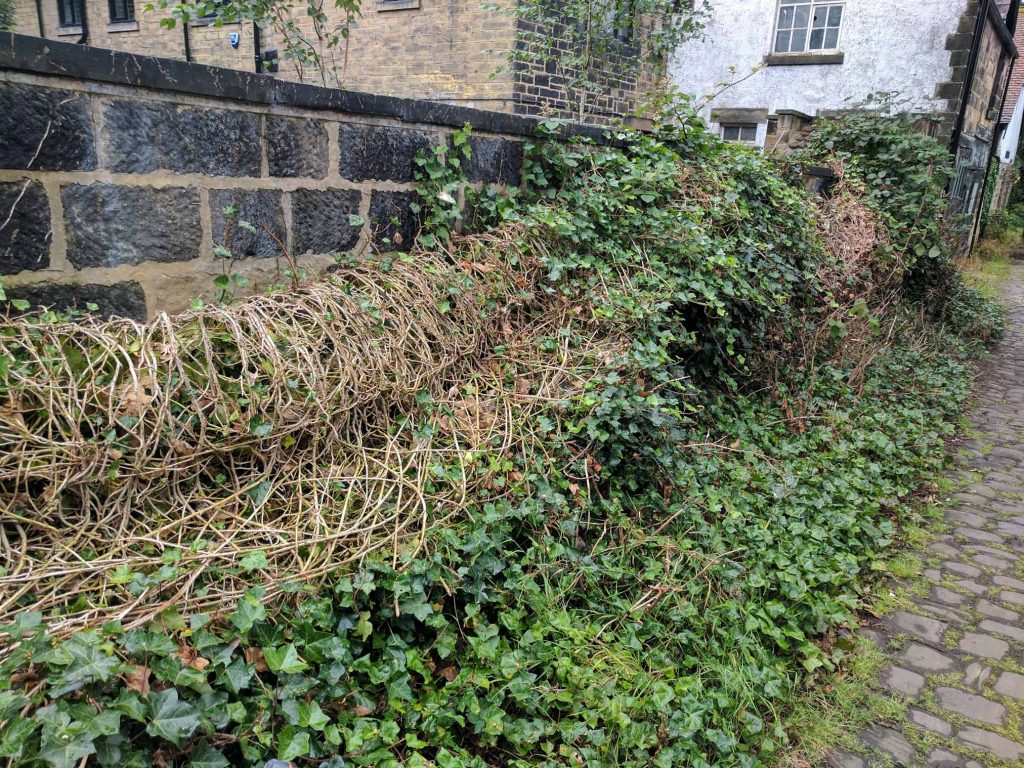 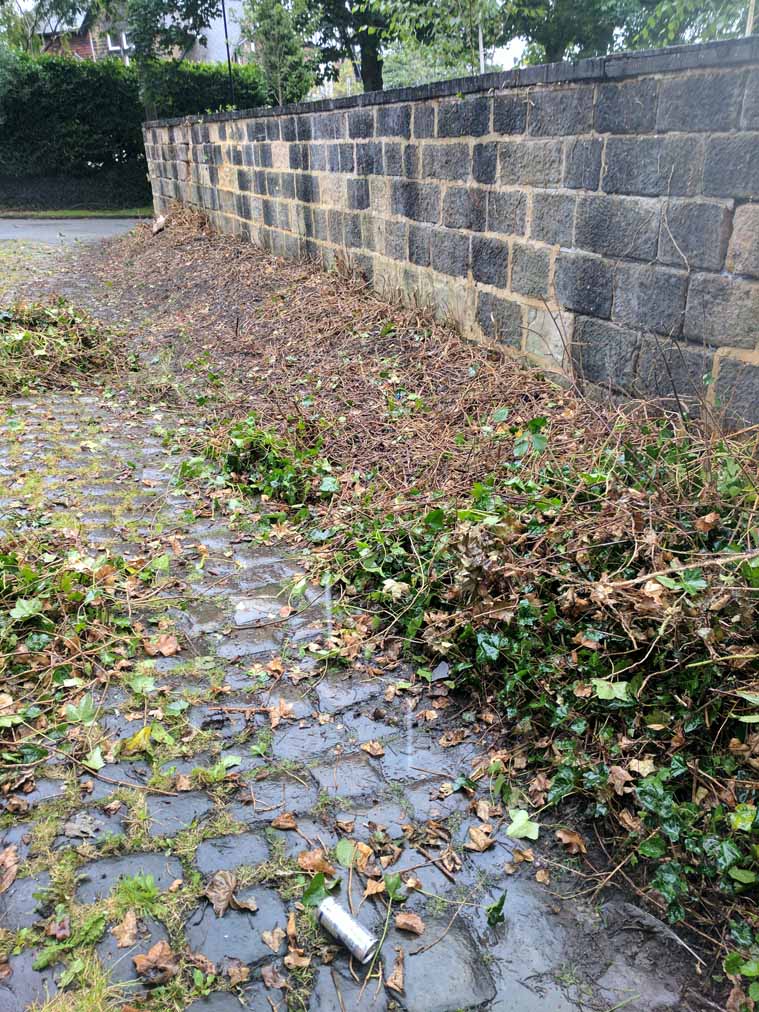 Once all the vegetation had been moved we were able to create a back bed. Railings were put on top of the wall, partly to block the view of the car park behind us and also to provide a framework for the roses to ramble over.

The soil had to all be dug out, sorted through to remove the large Ivy roots, a supporting wall built and the soil put back. The stones were large sandstone rocks which were already mossy (they came from the builders garden). The bed is 50cm wide and 60cm deep, the stones add another 25cm to the width. 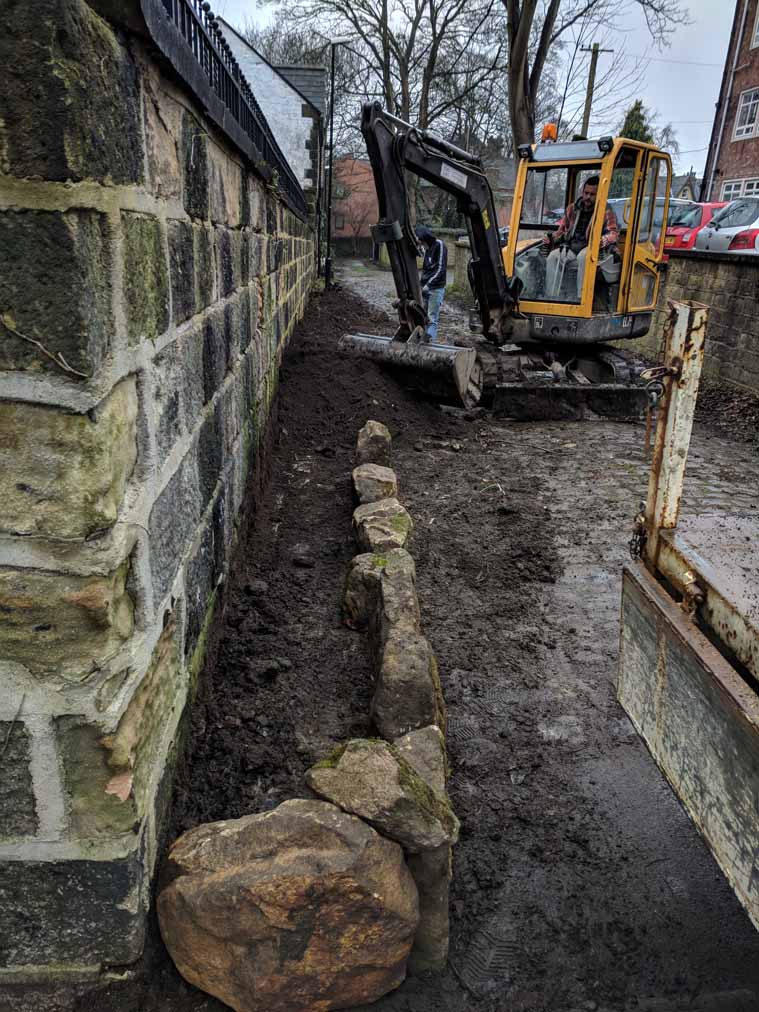 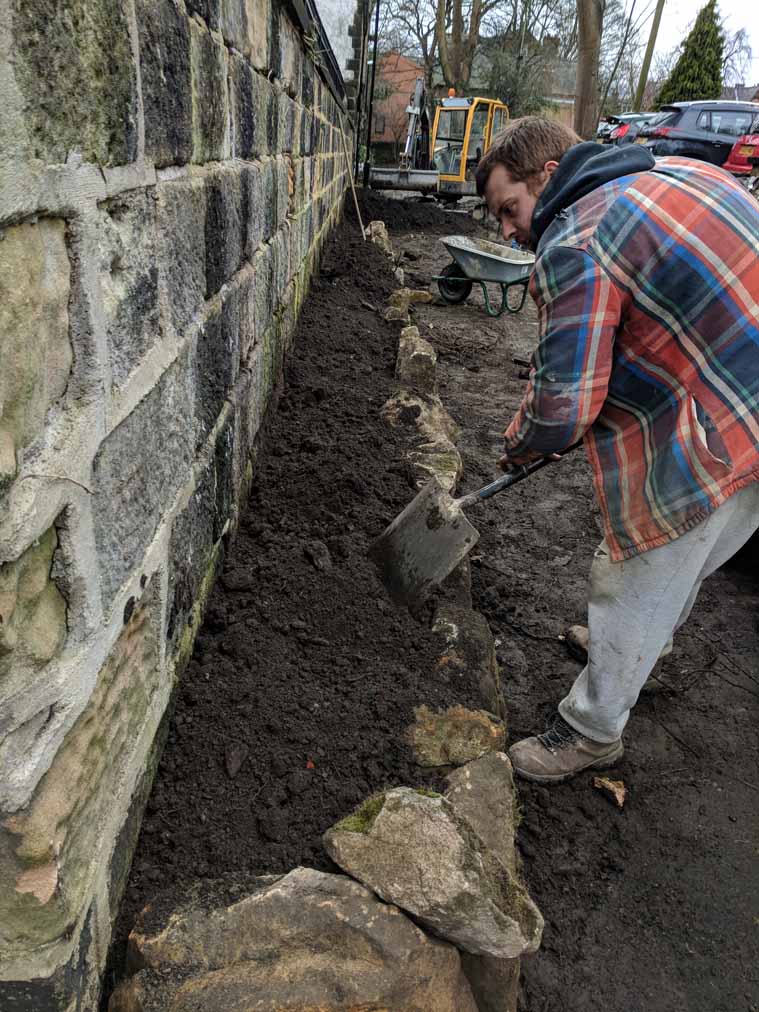 Once the bed had been constructed it was planted up with a wild hedgerow pack from the Woodland Trust. The hedging pack is a mixture of Hawthorn, wild roses, Hazel, Cornus, and Crab Apple. This should give food and shelter for the wildlife and hopefully make up for removing the thicket of Ivy.  The saplings are only 30cm high and planted 50cm apart so diffcult to see but they will soon take over, providing a wall of Spring blossom and Autumn berries 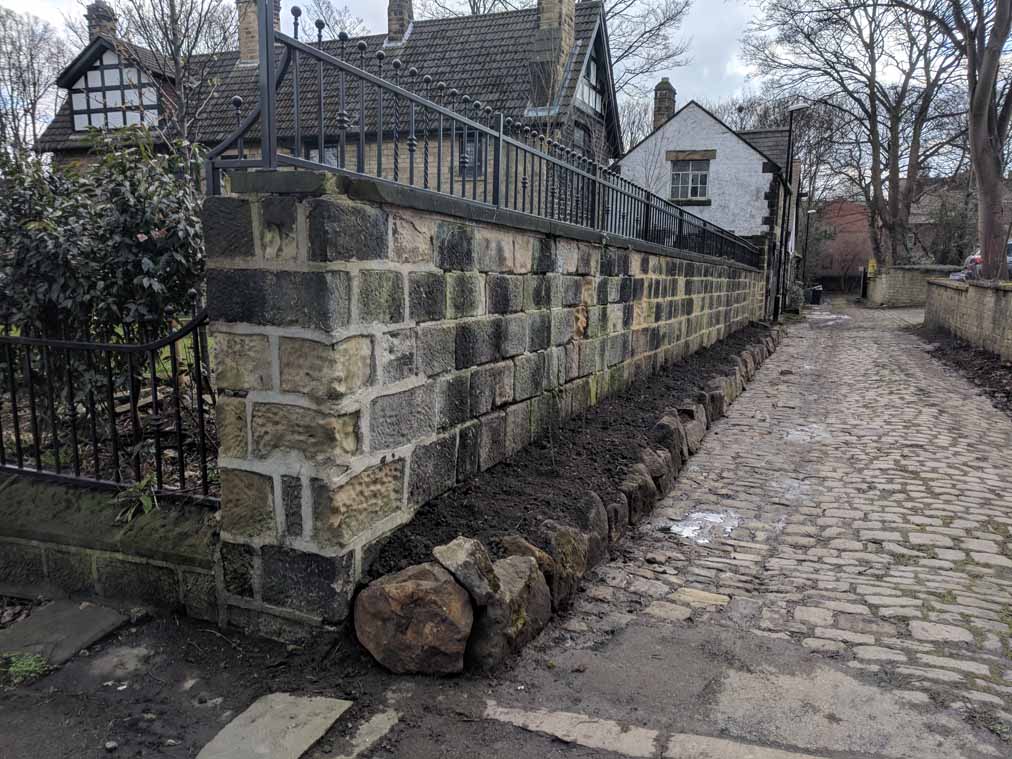 One of the discoveries  when clearing the vegetation was a storm drain (the only other discoveries were a couple of old milk bottles). We cleared the soil away and it was amazingly unblocked, this led to us creating two sections to the back bed. The section of bed with the lampost has been planted with blackberries and raspberries. 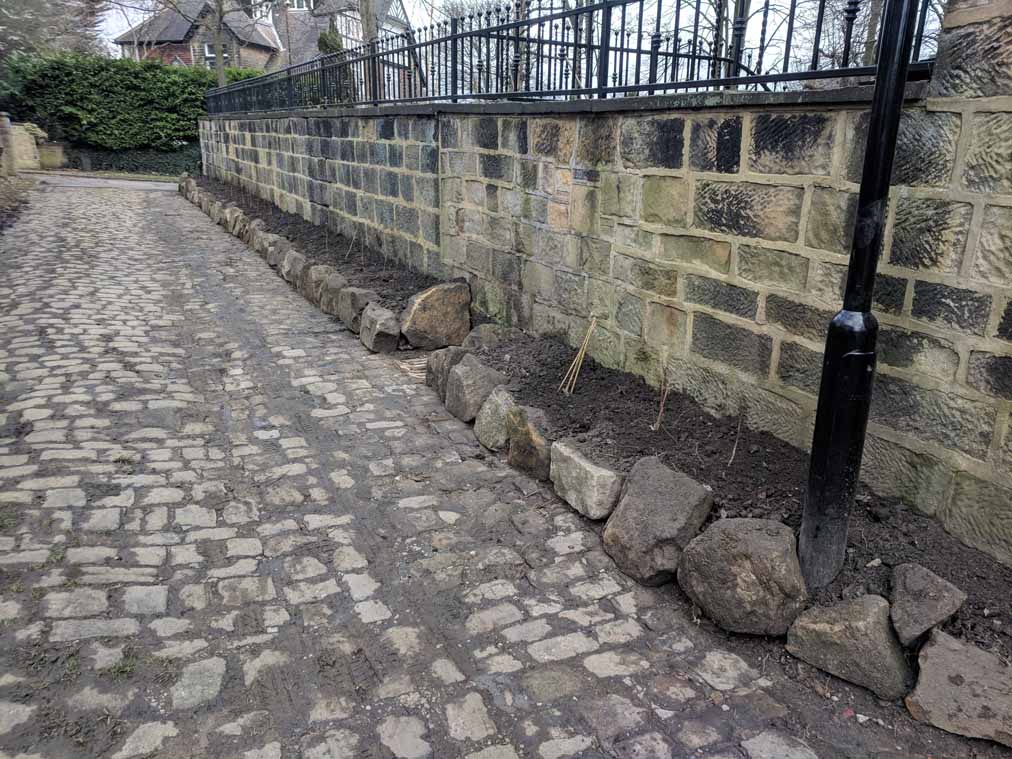 Whilst planting the hedge, one of the Estate managers for The NHS office (who are our neighbours) came out to admire and suggested that they needed to do something similar on the other side (fingers crossed).

We need to mulch the bed to make sure the weeds are kept down whilst the saplings establish but after it should become low maintenance. It looks sterile now but the soil was rich with worms and the plants should grow quickly and provide a wildlife corridor for hedgehogs and other animals. The hedge will also be underplanted with snowdrops, wild garlic, Oxslips and primroses. The stones will provide valuable homes for bugs, which then attract the birds. Look forward to sharing a picture when the hedge has grown and the rambling roses have tumbled over. 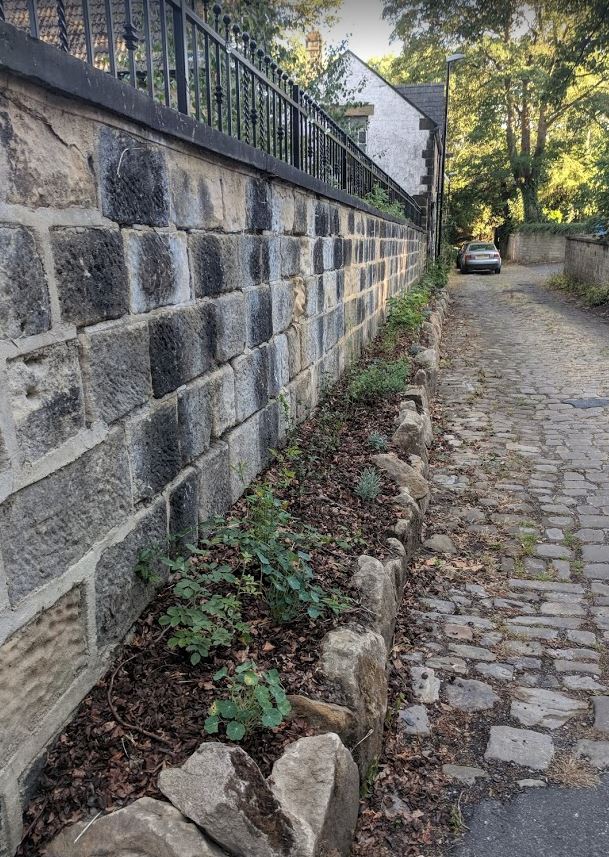