What is a vestibule? it’s a small entrance hall between the outer door and the interior. Our house used to have a vestibule, but it was taken out by the previous owners.  We wanted it reinstated so that it would create a space to hang coats, leads and store boots,  a more enclosed hall and protect us from the cold in winter. Notice the gaping letterbox, the bars at the windows. 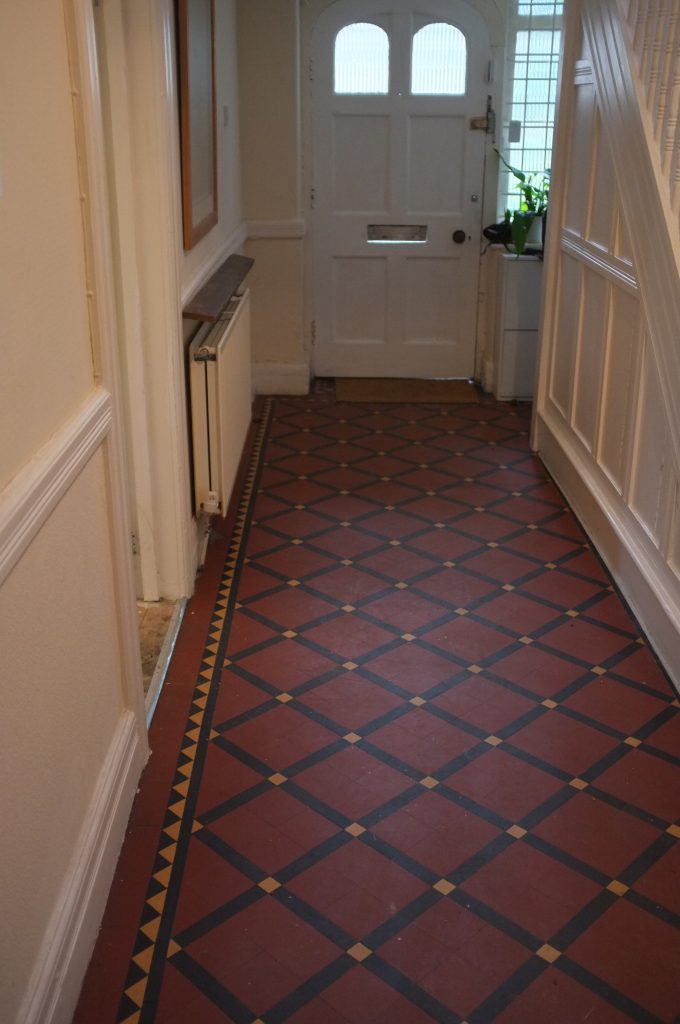 All our woodwork follows a very distinct style.  We have an existing screen which would have acted as a divide between the main part of the house and the servants side (see blog post “a tennis court“). We used the design of the divide as a template to create the new vestibule. 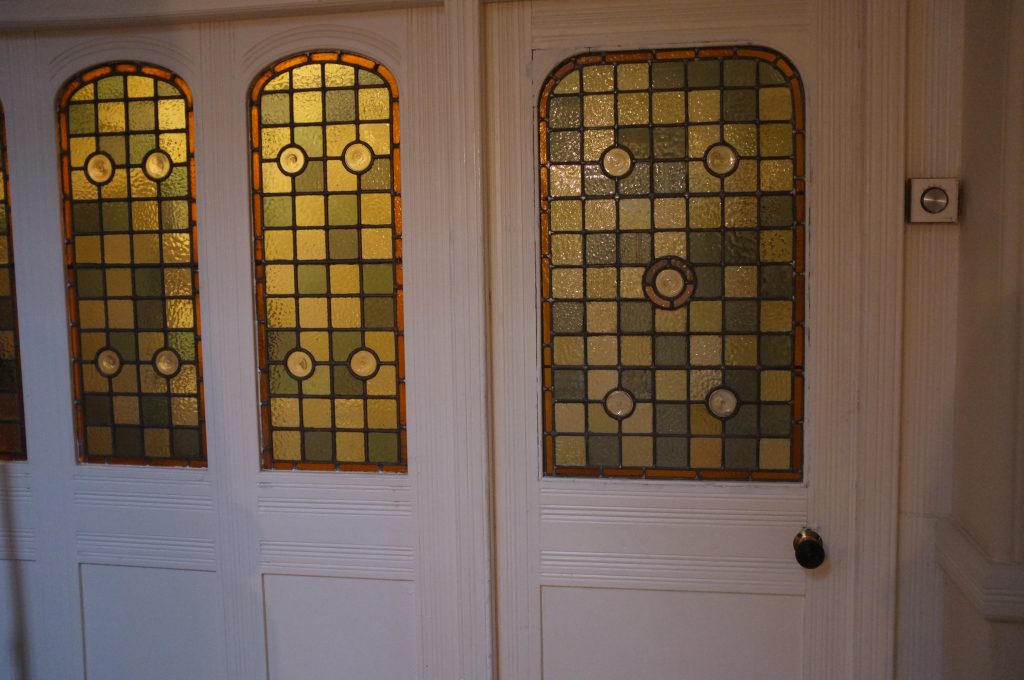 The door frame was made by a local joinery firm called Tanseys, they have already made skirting to match our existing skirting and new doors to match so they are used to the design style. The door frame is created as a solid unit and then planed to fit into the irregular hole. It is then finished with trim. 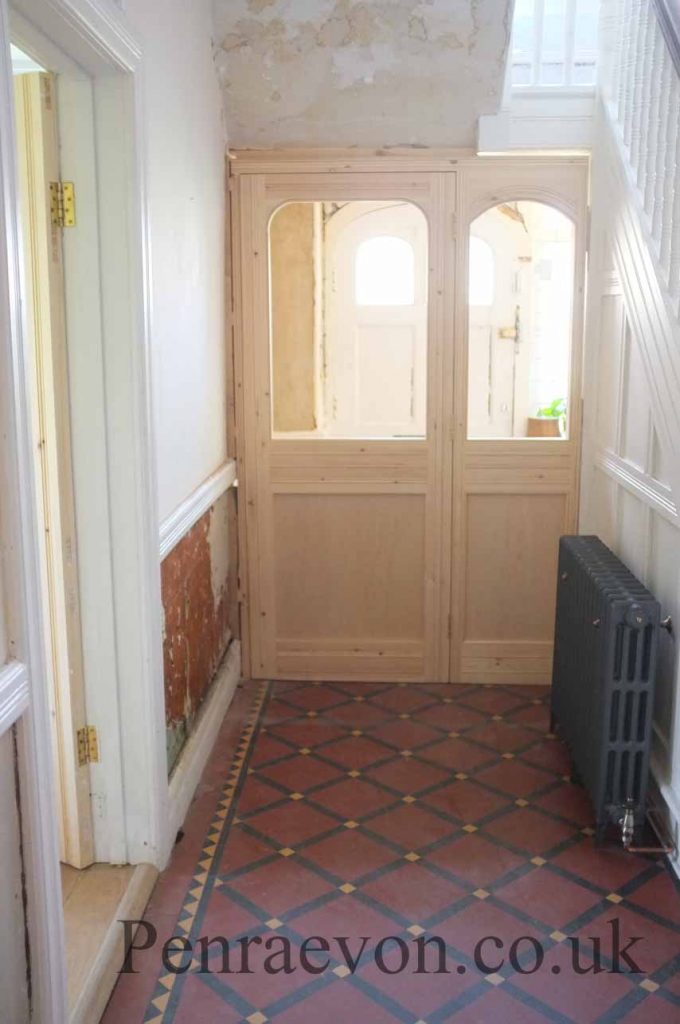 The radiator was replaced with an old cast iron style radiator and put on the other side. Gerry (he makes all our leaded glass) created some new stained glass to go in the door and window. The roundels are old glass and the coloured squares are random muffled glass. We finished the door off with a rim lock and beehive door knob 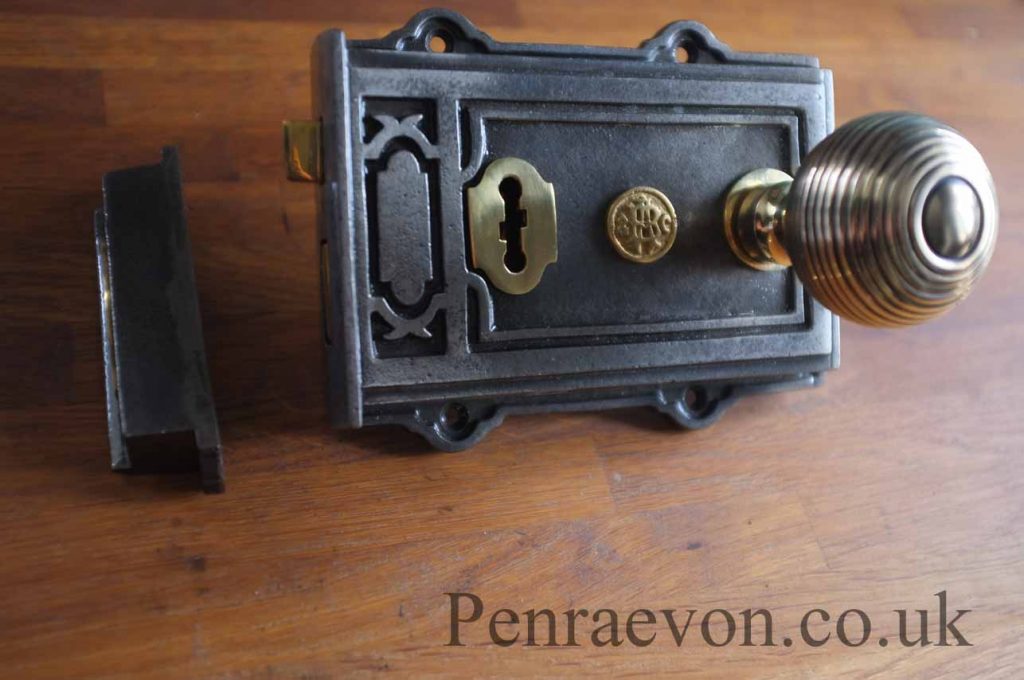 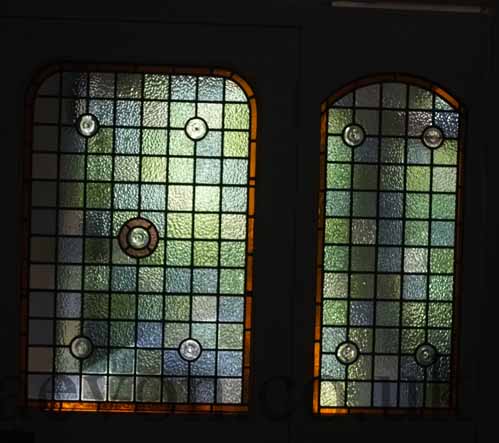 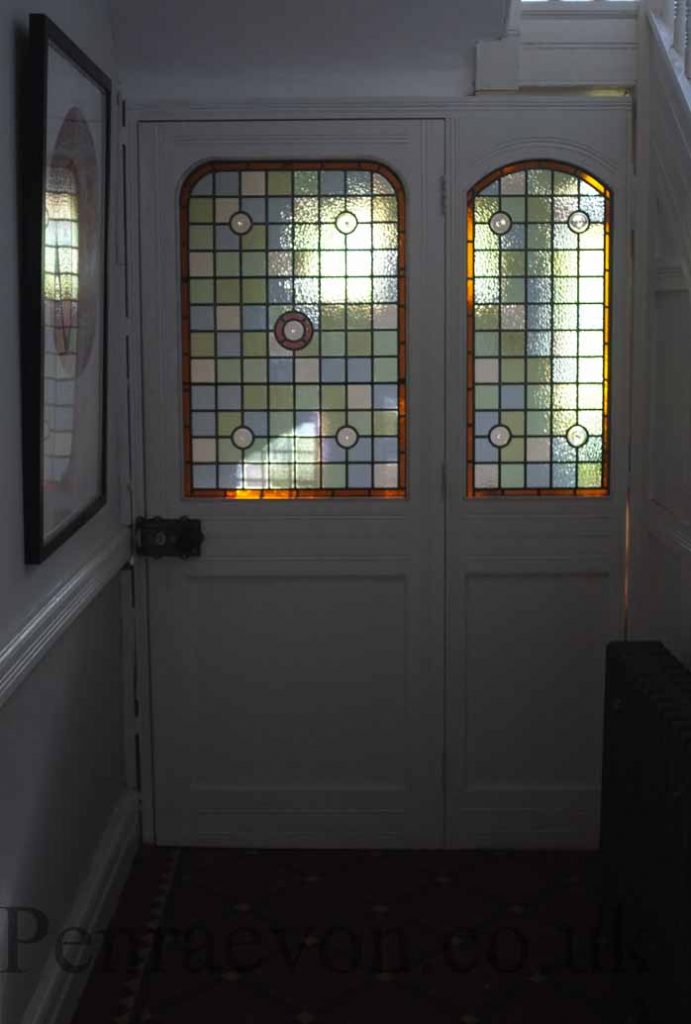 It took us weeks to strip and repair this small space it had been badly repaired over the years when water had got in behind the porch. At some point the walls had  been boxed with wood veneer (hiding the lincrusta behind)this had then subsequently been covered with layers of wood chip, painted and then later still an artex finish. 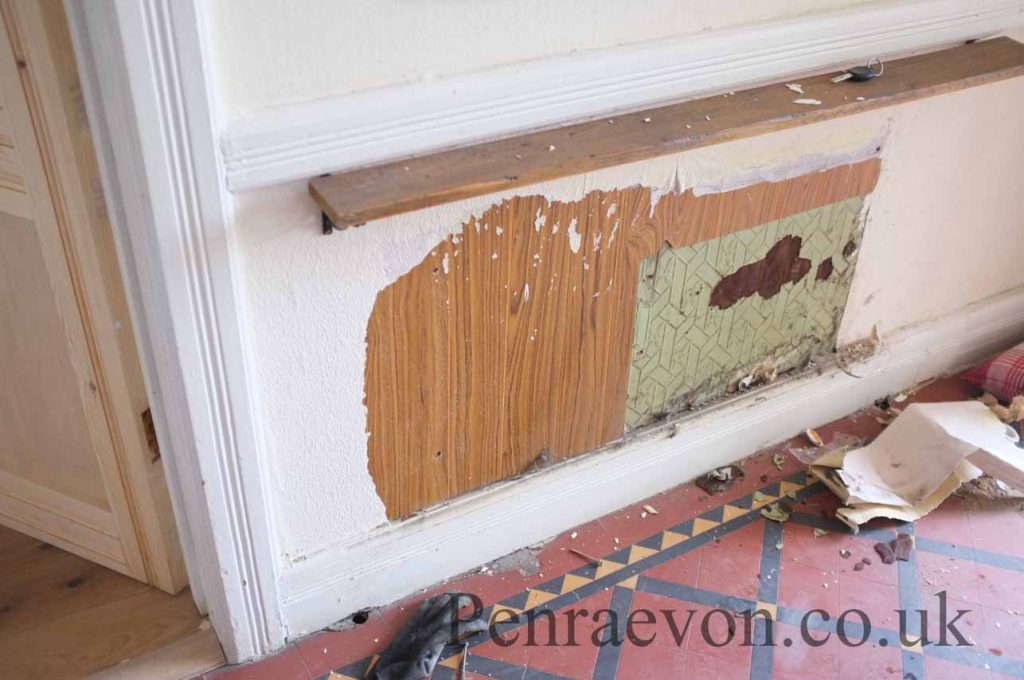 It needed stripping back which was a mixture of elbow grease, steam stripper and replastering in places. 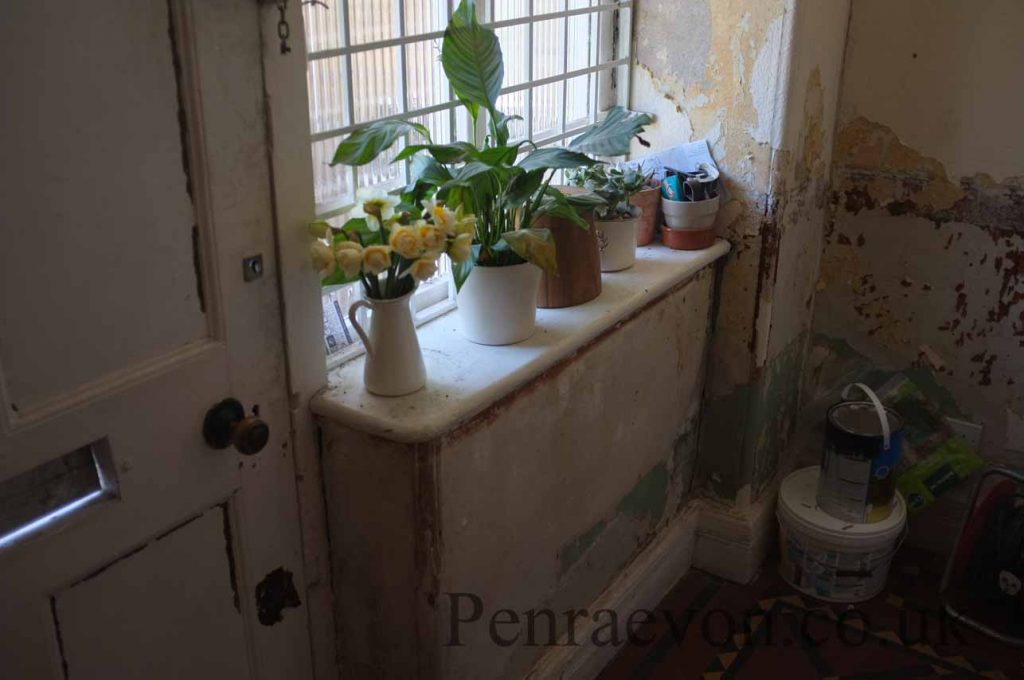 The door needed loads of work to bring it back to its former glory as a solid oak door. We removed all the redundant ironworks such as old locks, chains and ugly escutcheons and filled all the holes. 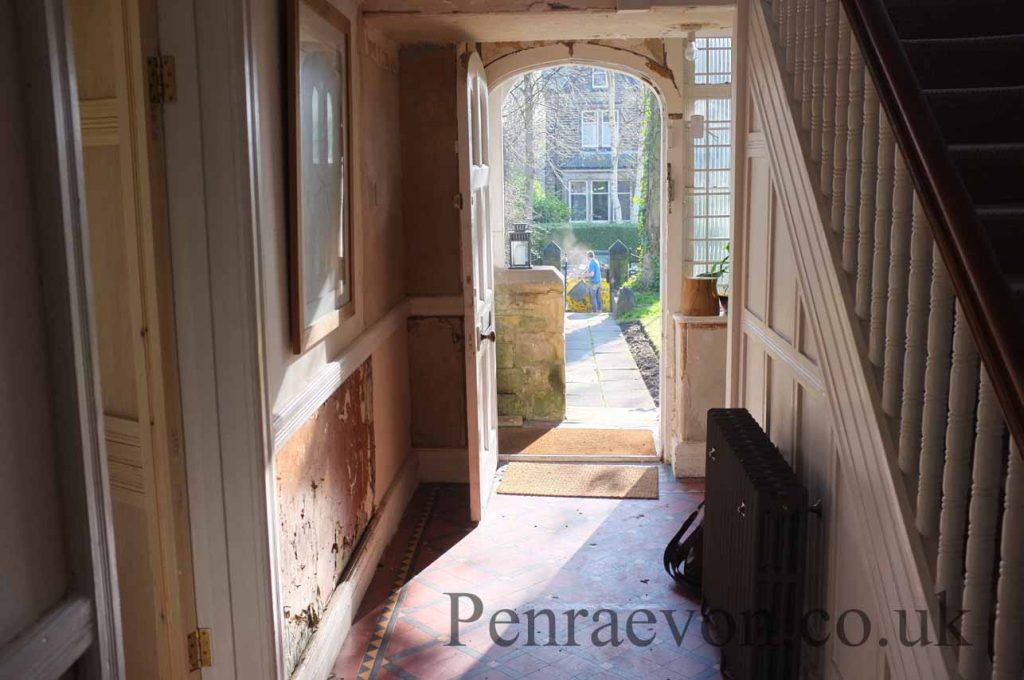 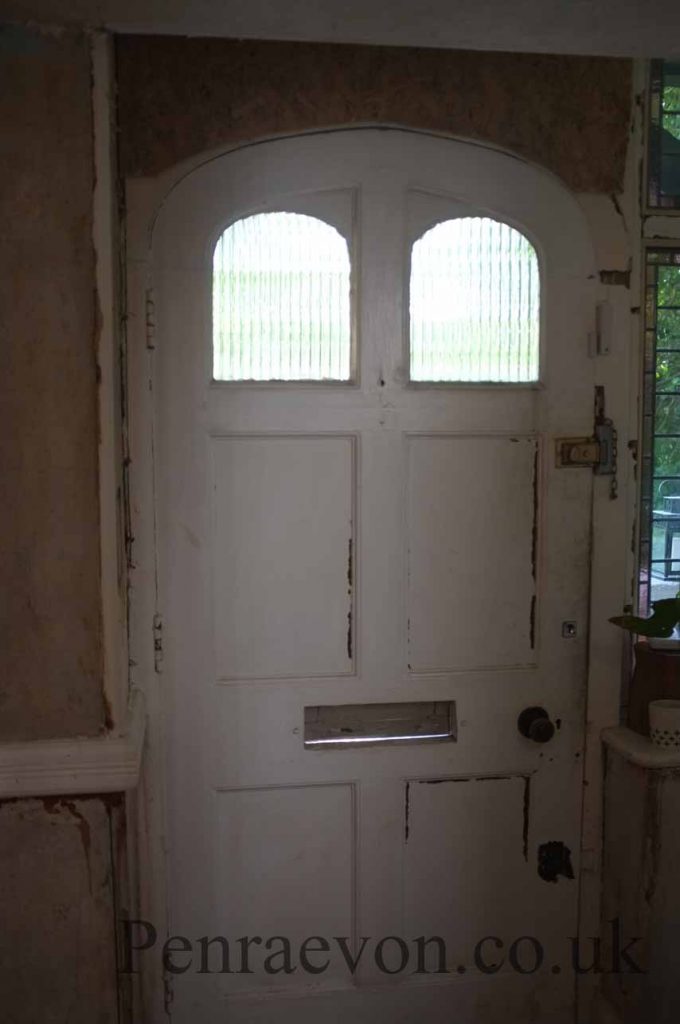 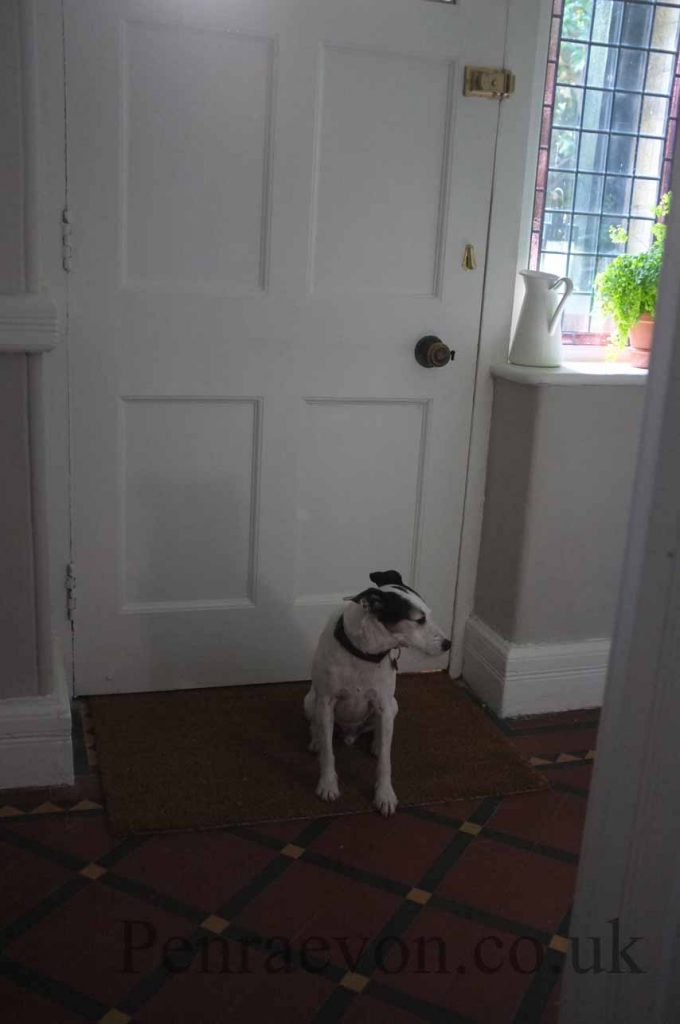 The vestibule is used as a place to store coats, dog leads, umbrellas and boots. To create a coat rack we bought some cast iron  coat hooks and mounted them on to a section of left over dado. 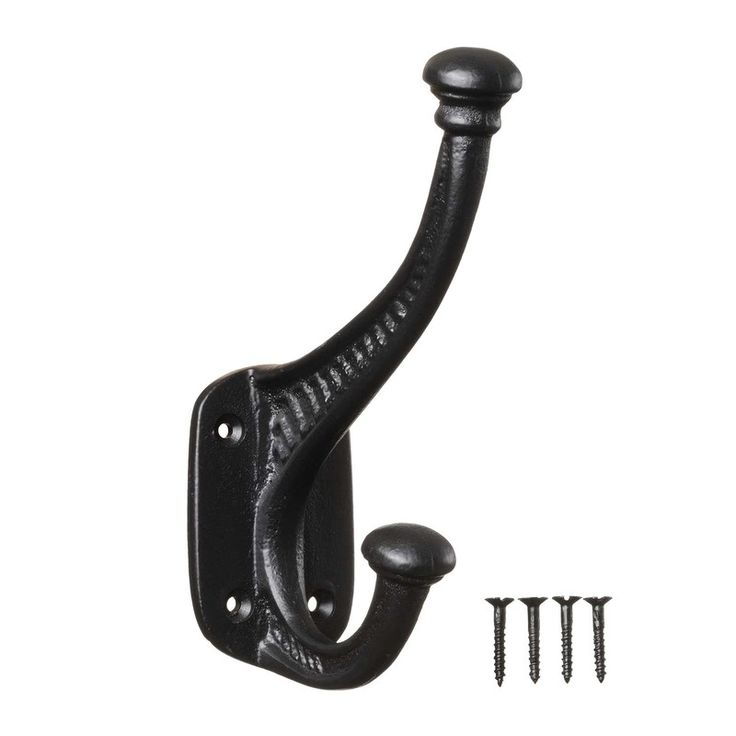 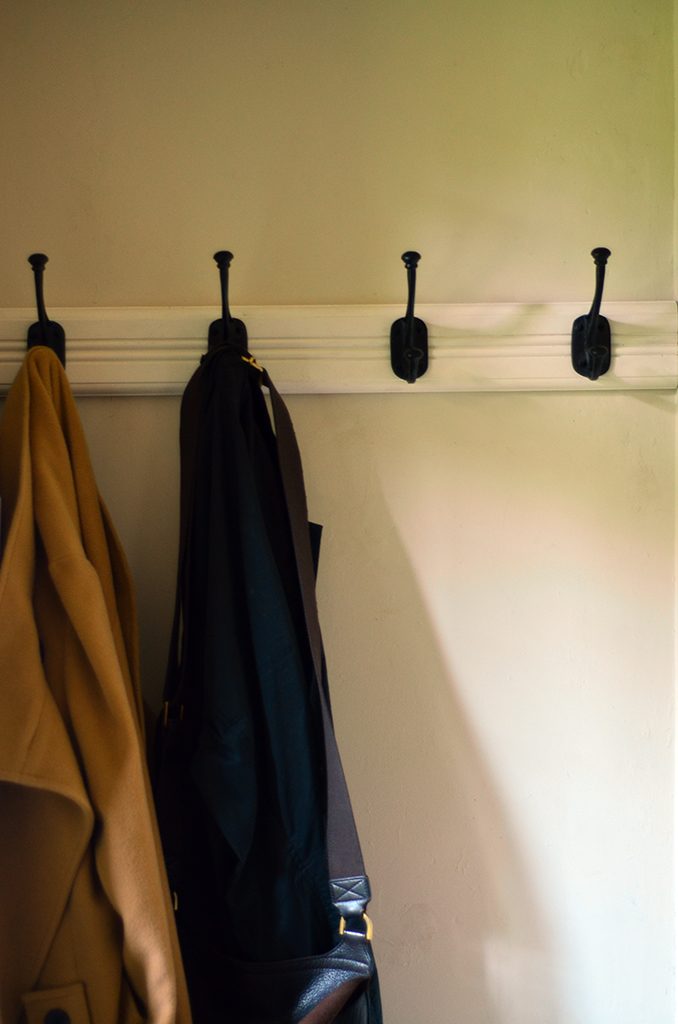 And it’s now a place of tranquil serenity. 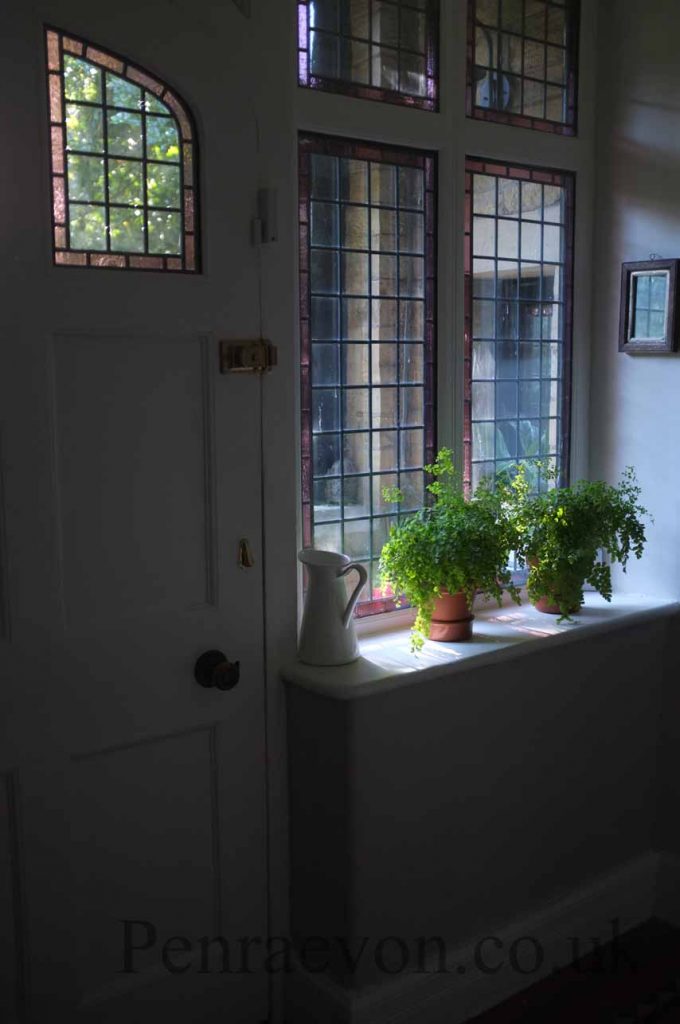 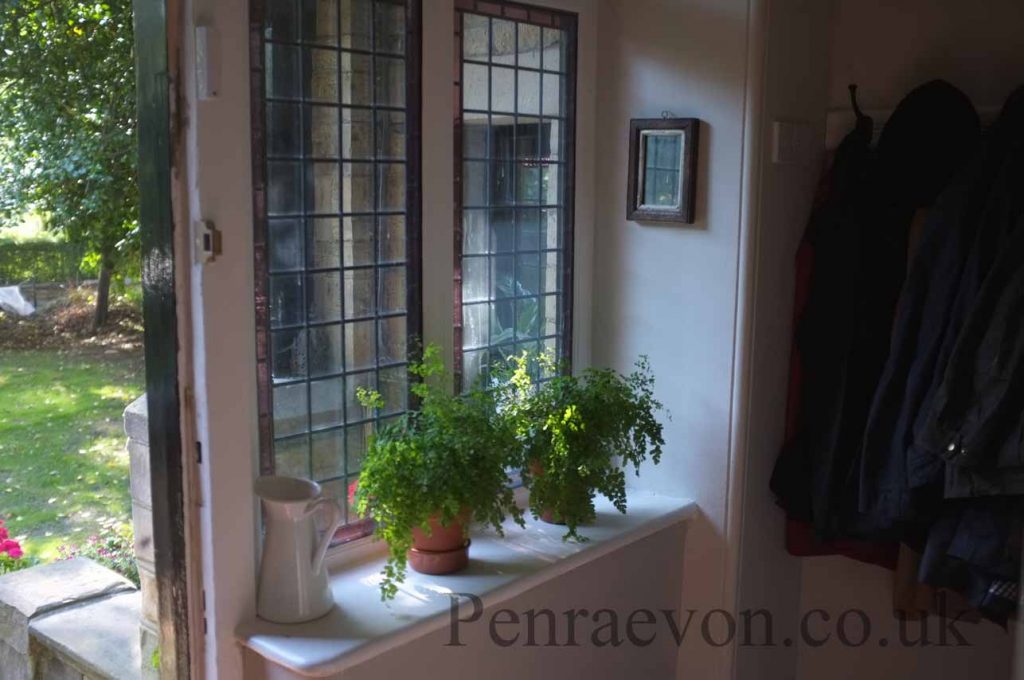 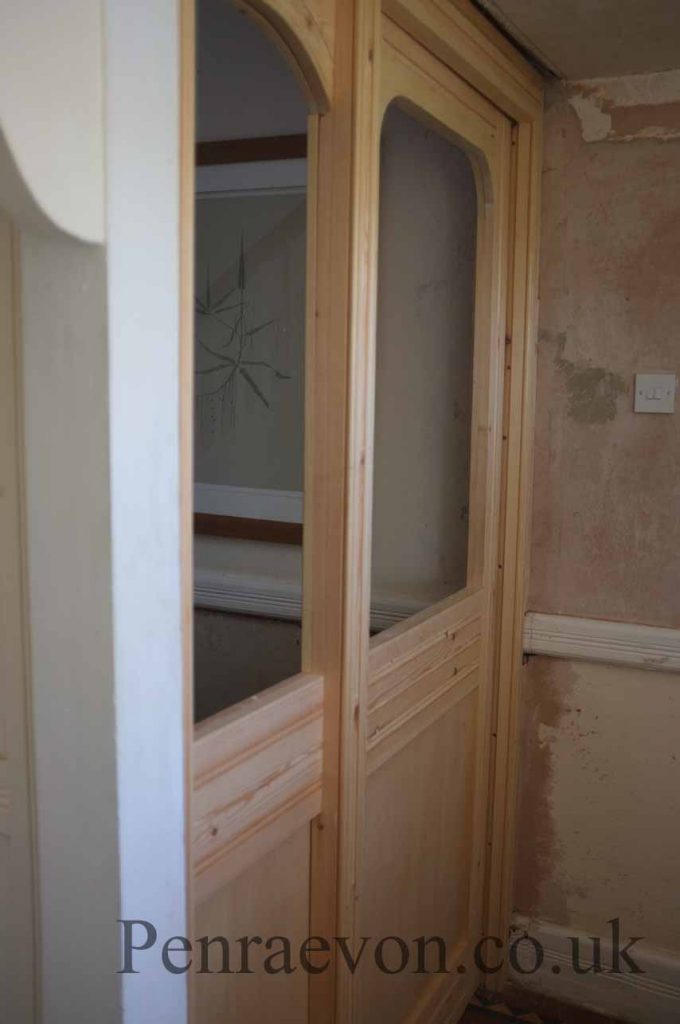 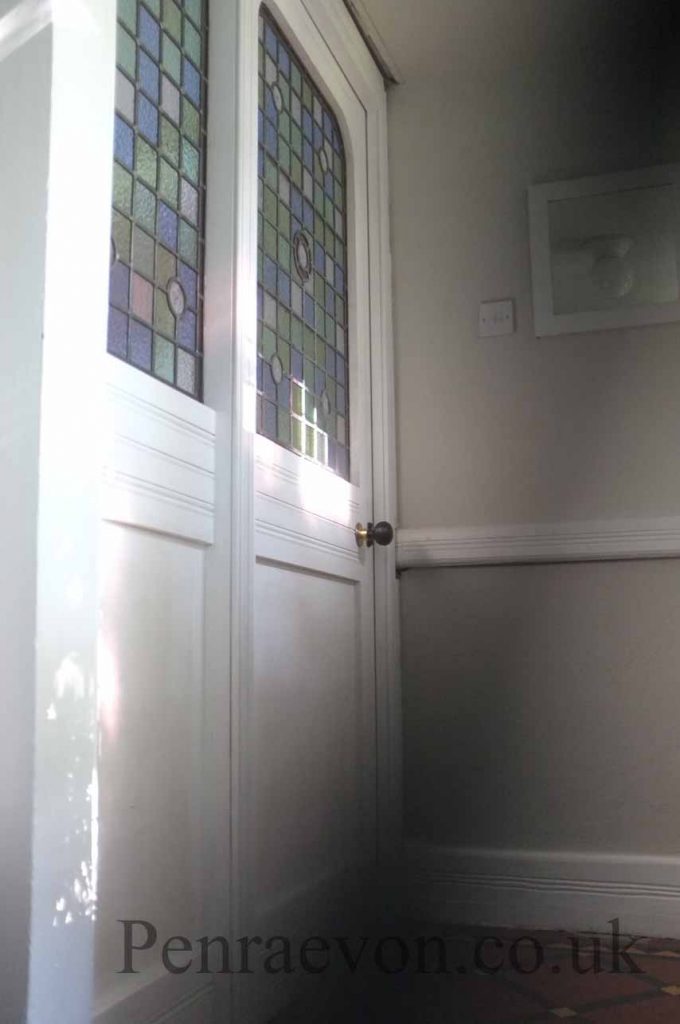 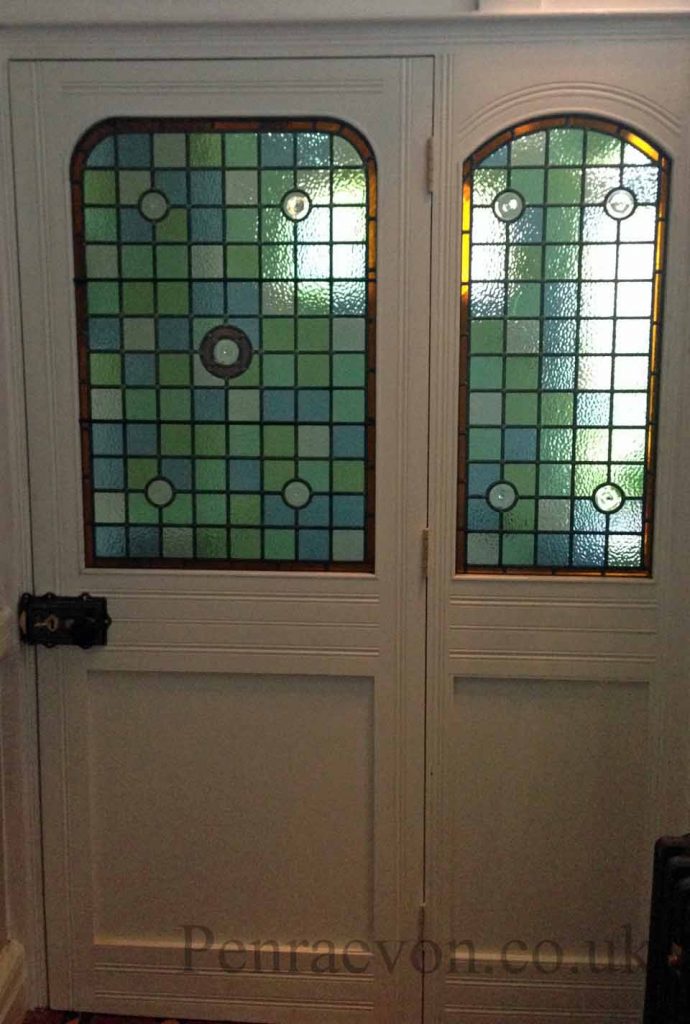