We finally have a door knocker. It took a lot of work to get the door up to scratch and a few searches for the right door knocker but we have settled on this one. A bargain in the sale at Anthropologie. We loved the way it was a bird, which we thought played with the name Penraevon (there are an increasing number of bird-related items creeping into the house!).  But before we could install the knocker we had to repair the door…and the frame….and the porch.

It is the finishing touch to a project that has taken months and involved a new porch roof, new windows, painting, repairs as well as the brassware (I love that it’s called ‘door furniture’). The front door had taken a lot of knocks over the years and has taken us an age to get back to a decent finish. The porch roof had been left to leak onto the front door which had rotted some of the frame away, the letterbox had been enlarged to allow office post and parcels be delivered. Windows had been put into the solid oak door with reeded safety glass and security bars. 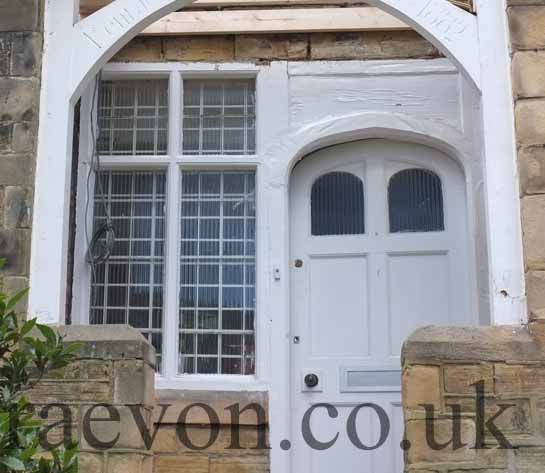 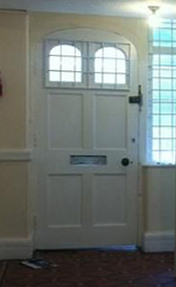 We have fixed the porch roof, removed the bars, repaired the door frame, put in new windows, and painted it all. 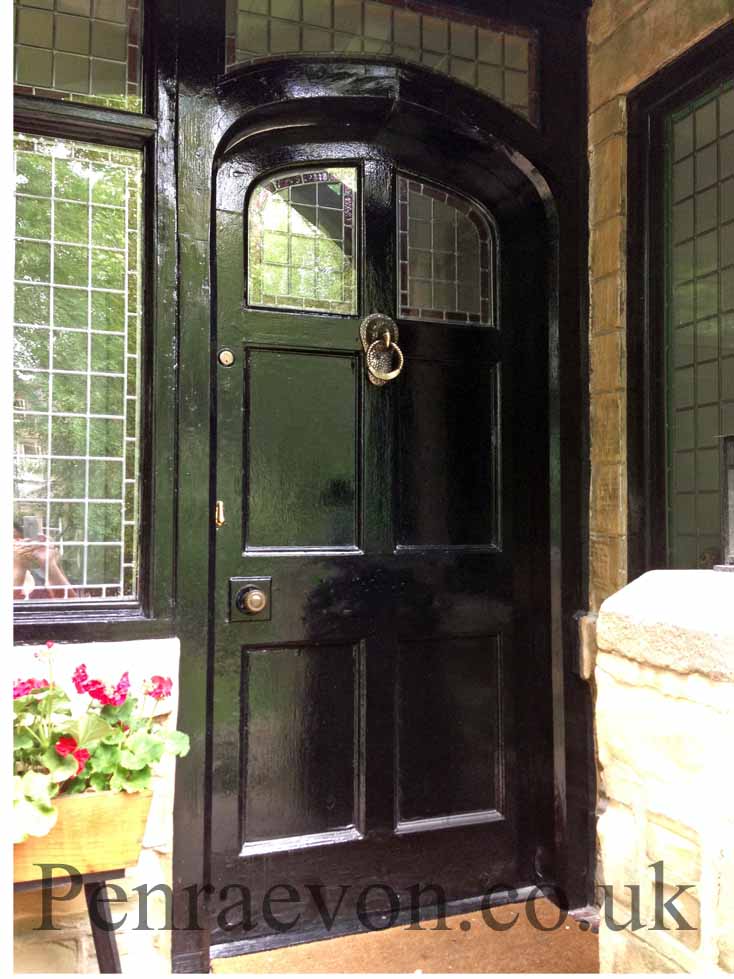 The door frame was repaired by scraping the paint off, chipping off the polyfilla which had been used to repair the damage, and finally cutting out the rotten wood.  Once all the rot had been cut out we could use a stabiliser to harden the softened wood and create a key for any wood filler to adhere to.  We then spliced in a hand made new section of wood in the arch and the upright.  We also removed the rotten panel from above the door in order to create a fanlight. 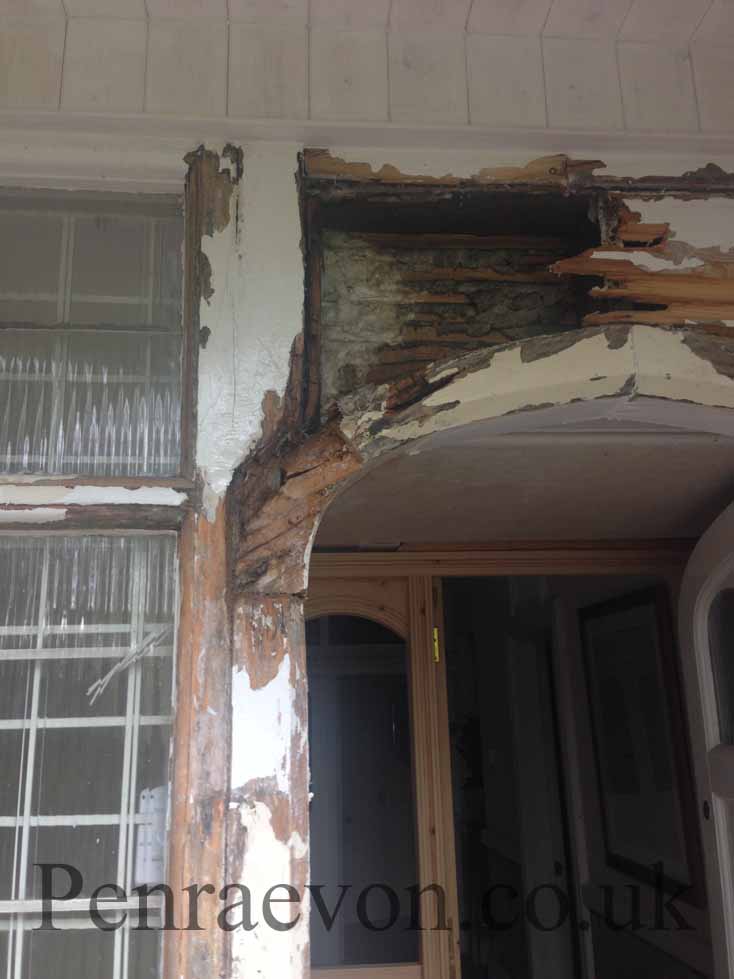 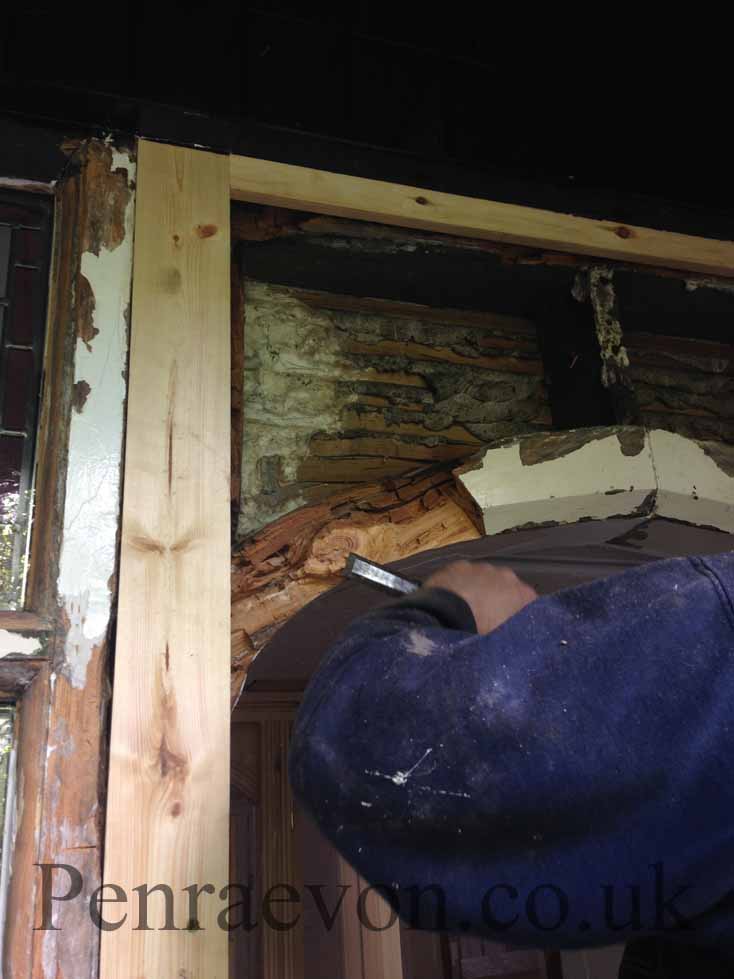 The windows were then removed and replaced with old leaded glass with a rose edging.  These leads were then encapsulated in double glazed safety glass. The windows in the door were chiselled out to follow the shape of the single arch of the door and porch rather than the twin arches they had been cut to at some point in the past.  Originally the door would have been a solid oak door with no windows at all, but we really wanted to bring light into the vestibule and hall. 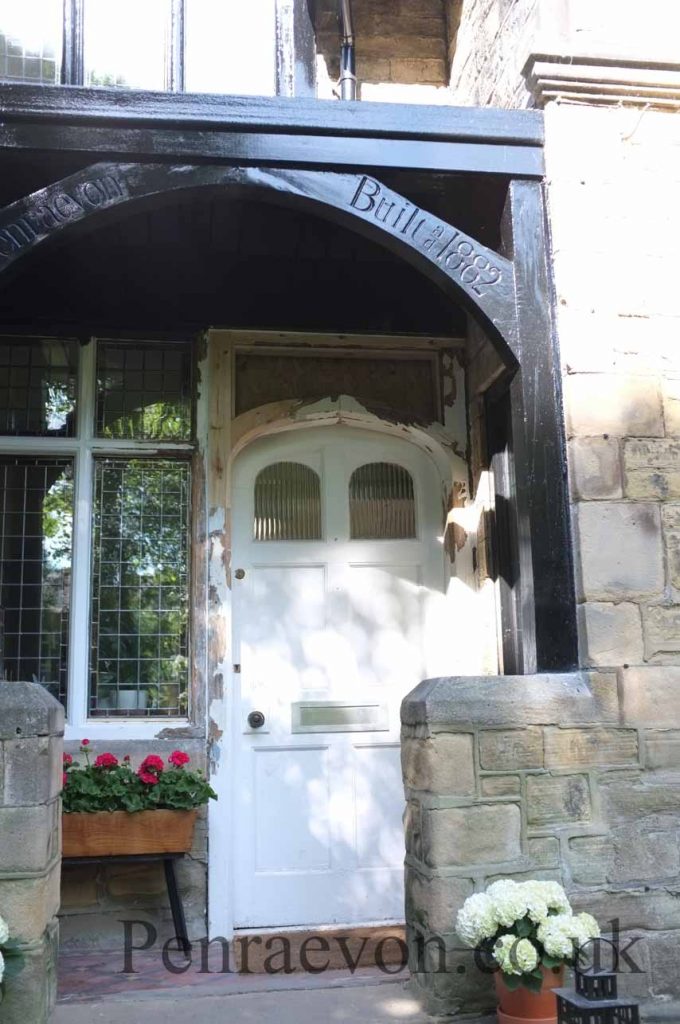 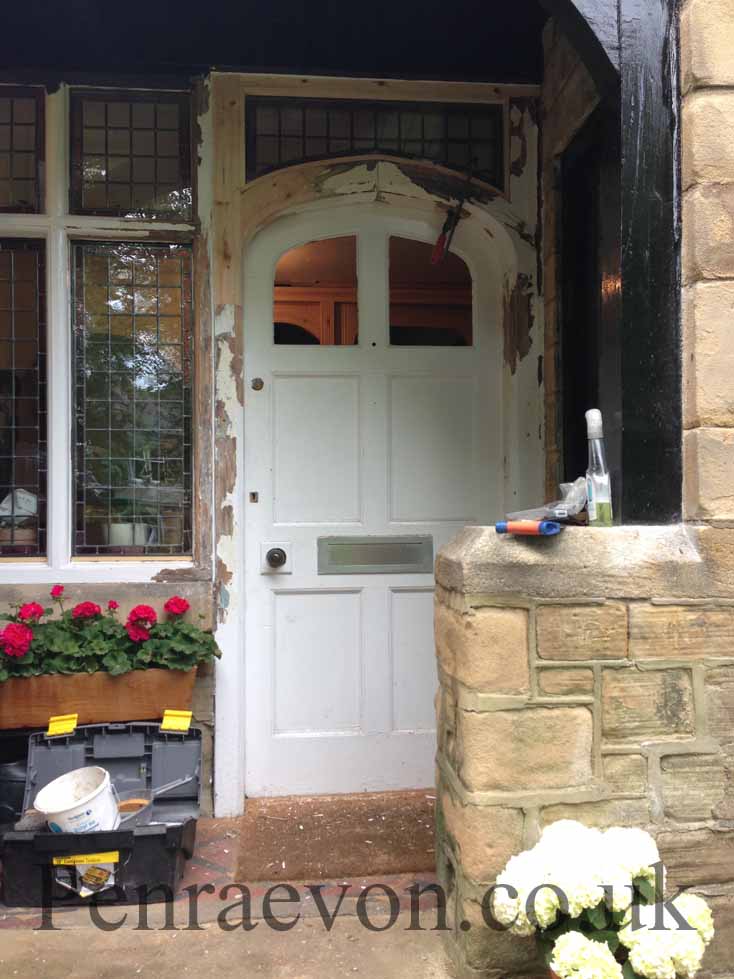 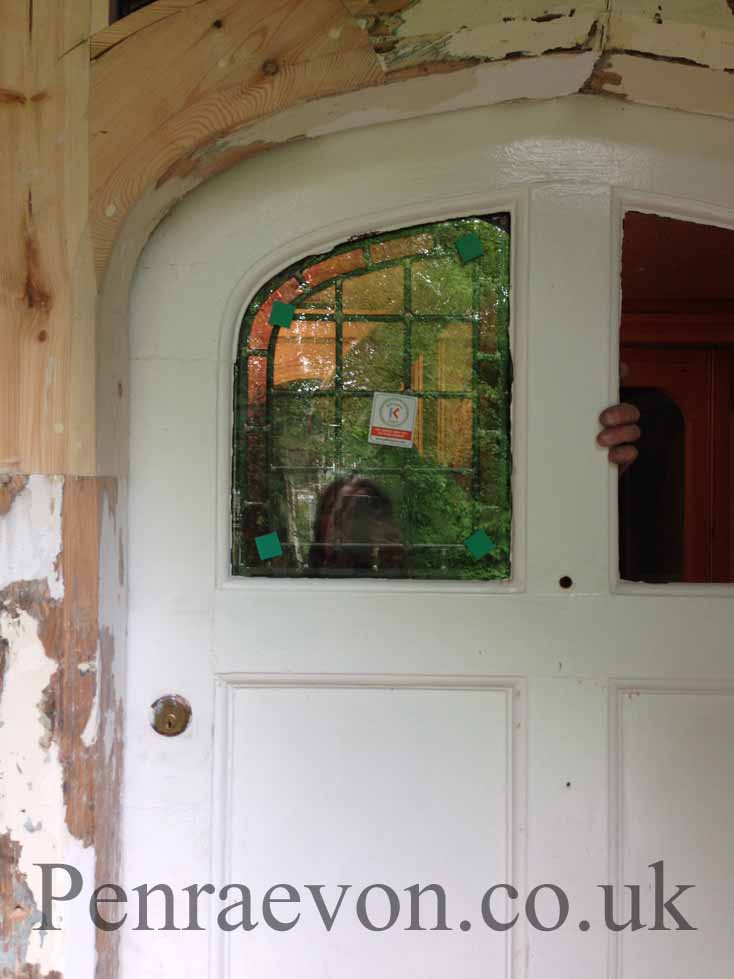 We then turned our attention to blocking up the letterbox. We have a postbox at the bottom of the garden so this letterbox was redundant and was massive, letting in cold draughts throughout the winter. We cut a piece of timber to size, slotted it in and then finished with epoxy wood filler to create a seamless finish. 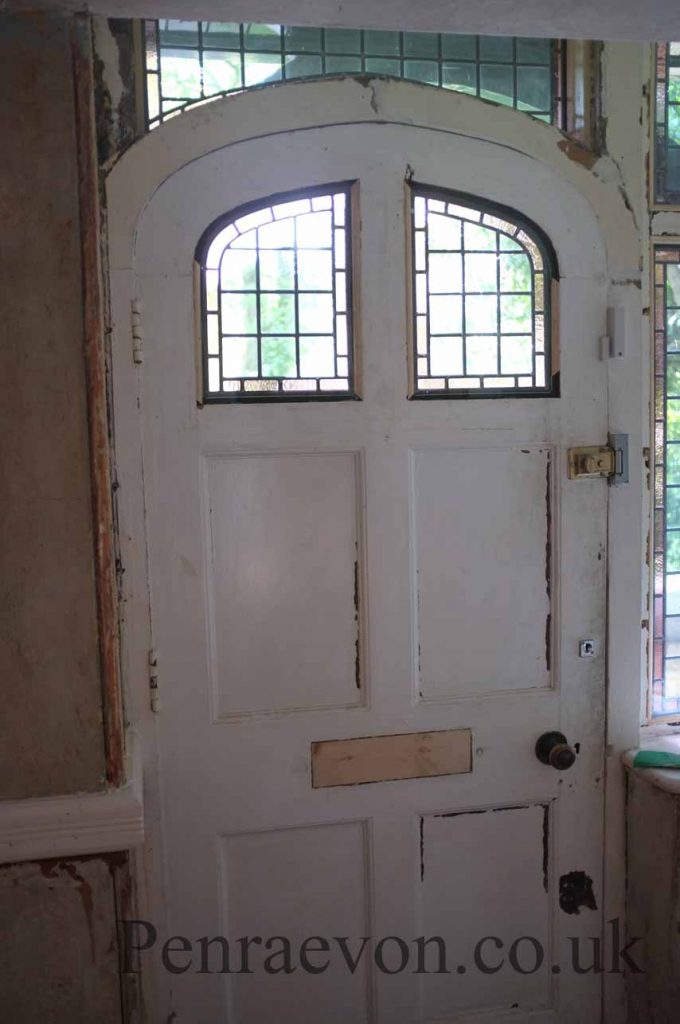 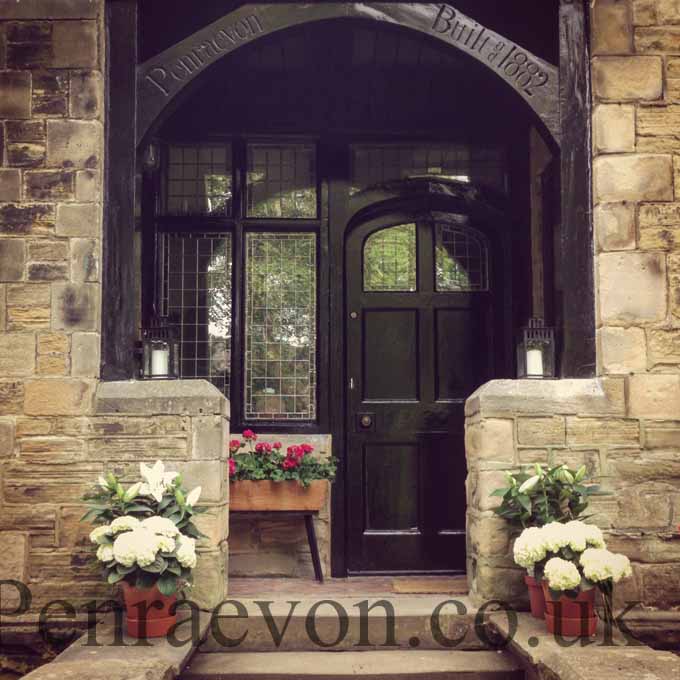 So all we need now is for some guests to come round and knock on the door, knock knock. Come on round and have a cup of tea.