Began work demolishing the crude office panelling that had been installed in the Living room. It was a plaster with wood veneer underneath, but what was behind that? Before I could find out we had to get the electrician to remove all the wall plug sockets and the plumber to remove the radiators.

So what was behind? Well mostly the original dado rail and lovely deep skirting board but also 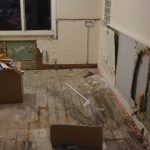 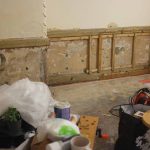 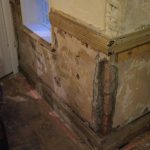 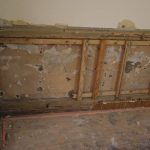 a bricked up modern door and some Art Nouveau Lincrusta, painted a fetching green colour. To remove the panelling I settled on a method of crowbaring off the existing skirting board, hammering upwards from the underside of the modern dado rail and then using the crowbar to remove all the wall cladding to reveal the battoning which was then removed by pulling the nails out with pliers. This also revealed the original window sills. There was some damage to the wall which may have been why it was covered in the first place but nothing a spot of dot and dab and a fresh skim won’t cure.