Architectural plans and the extension

Our house was always believed to have been built by the firm Chorley and Connon as they had built many of the other houses around us (and that is what Pevsner says). However we discovered that when our house was extended 17 years after it was built the extension was done by the architect Corson . An architectural mystery. 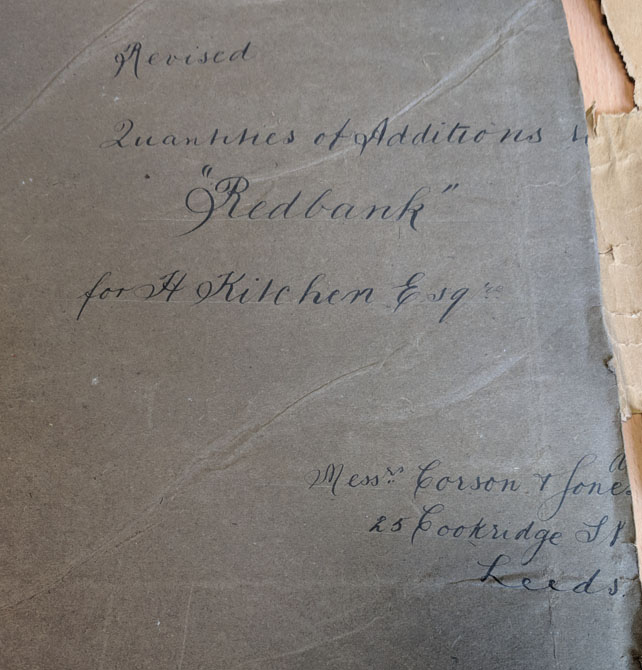 Both architects were very prominent at the time. Franks, the builder, who over saw the building of our house had worked with Corson during the building of the Grand Theatre but Franks is also documented as owning the Newton Park Building Club which built the houses on Oak Road using Chorley and Connon as architects . Both architectural practices were still active in 1898 and we suspect that good manners would have dictated that the same architect would be called on to make the alterations. But maybe our house is a little bit Corson and a little bit Chorley and Connon.

We knew that the way to clear this up would be to find the original building plans. In Leeds, building plans are held at the West Yorkshire Archive (WYA) in Pudsey. Most of the archive can be searched online (but not the building ledgers post 1870). If you know the year your house was built and the address you should be able to find your building plans. I had been warned by the archivist at the WYA that the building plans varied widely some were beautiful vellum plans showing full details others were just a scribble.

The WYA is in a modern office building, it manages to be like a cross between a school and a bookies. There all these little slips of yellow paper which have the details of your documents and people work in silence concentrating furiously until they find something exciting to them or fail and instead discover a dead end and disappointment.

In the ledger for 1880 I found the entry for our house in fact I found two one in the Spring and one in the Autumn, they had obviously made some alterations. I put in my request for the two documents and waited two weeks for an appointment to view the documents.

we have had a problem with your two requests

The archivist was holding my yellow slips, unfortunately one of the documents no longer existed it may have been lost or destroyed. Supposedly the Council tended to only keep the building plan that was finally approved. They did however have the later building plan.

The Building plan was sat on her desk all folded, obviously it was only made of very delicate tracing paper folded in on itself. Unfortunately for us our house was built during the short period before the Building act came into place in 1884 which said all Building plans must be submitted on Vellum or similar quality and not tracing paper, even then they knew how fragile these plans were. 140 years later and our approved building plans were disintegrating. (there is a great academic paper on the Victorian Building landscape of Leeds by Frank Trowell)

The drawings were emailed to me a week later, they are dissapointingly not stamped by the architect. The building plans are obvious revisions and would work best with the original submitted plans.  We did manage to find a lot of things out though.

Our house appears to be the first plot sold, and Oak road used to be called Oak Bank. The coach house next to our house was already built before the house. 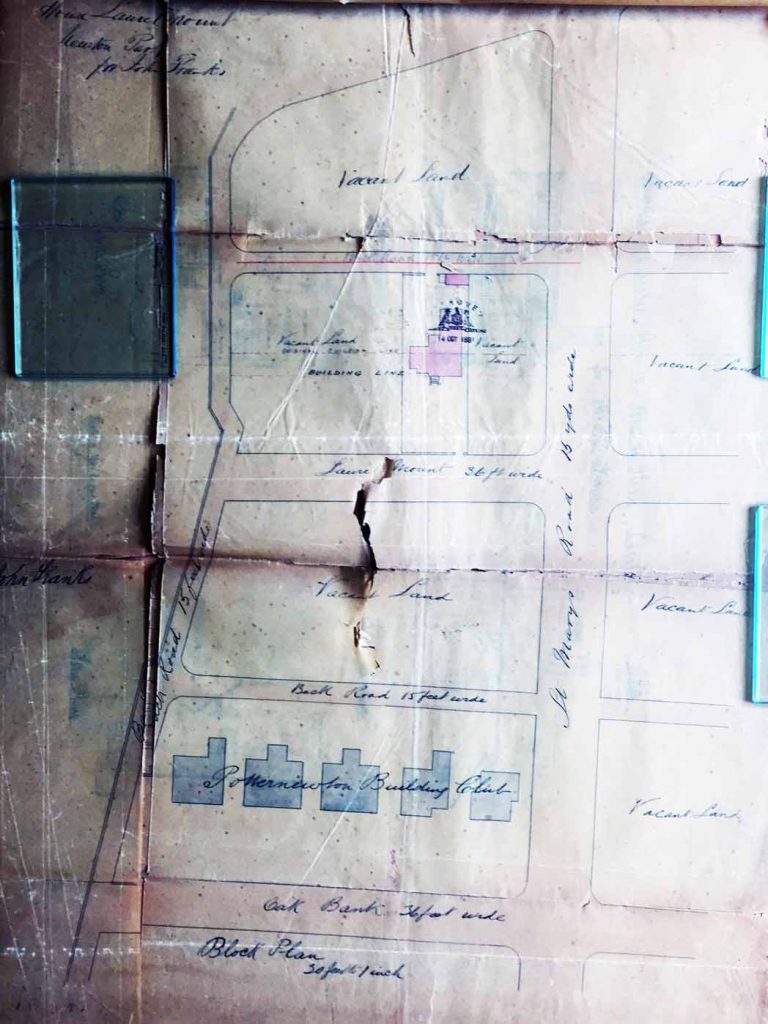 The remains of buildings around the back of our house seem to be a wash house and outside toilet. 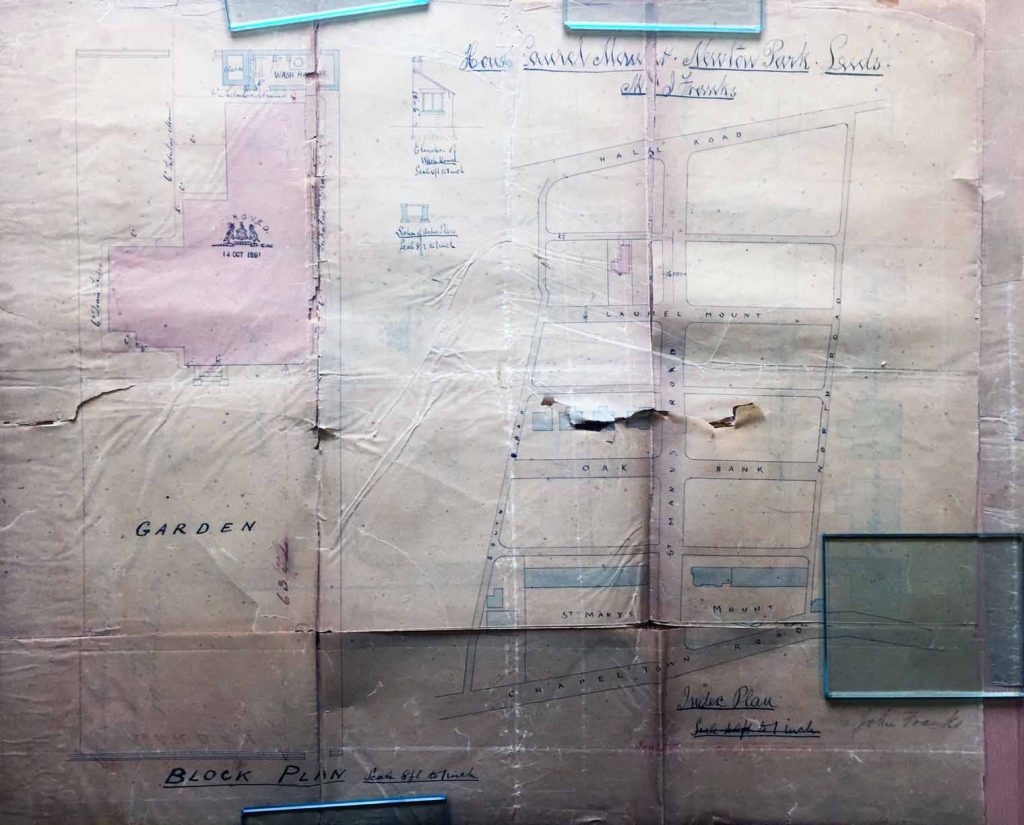 The original room layout shows the dining room and drawing room in opposite places. The window in the side elevation was never built as there was a chimney in the way and the timberwork patterns were changed. We also seem to have lost a balcony design to the front of the house. 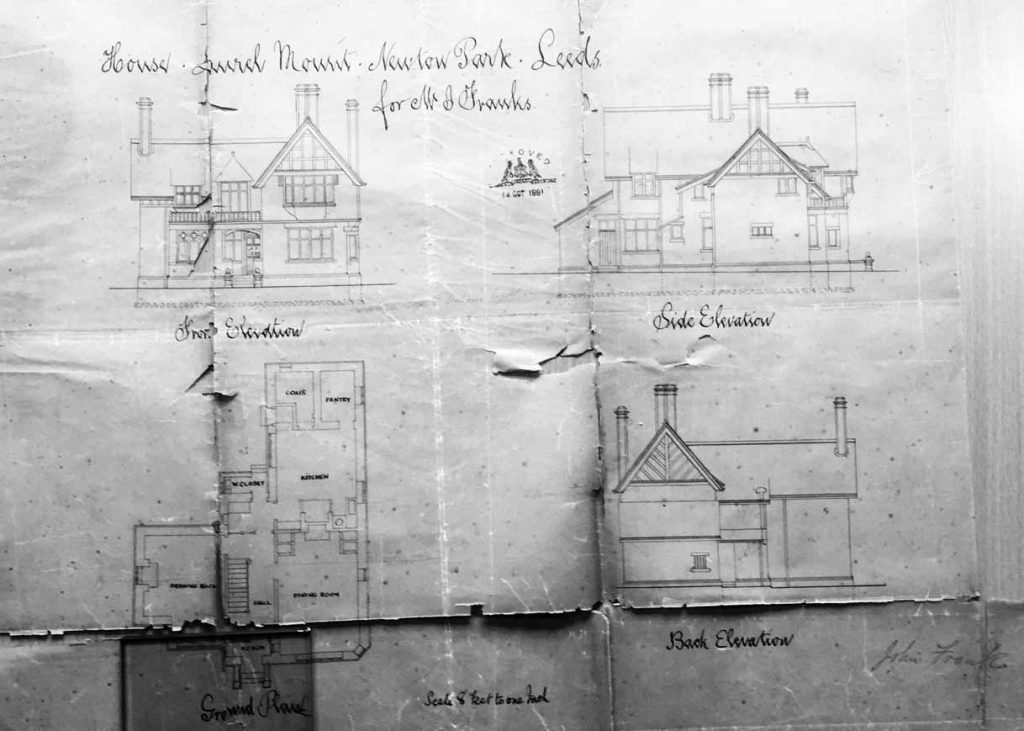 The house had two inside toilets and a bathroom with hot water. The fireplace in the upstairs bedroom was moved to the outside wall. 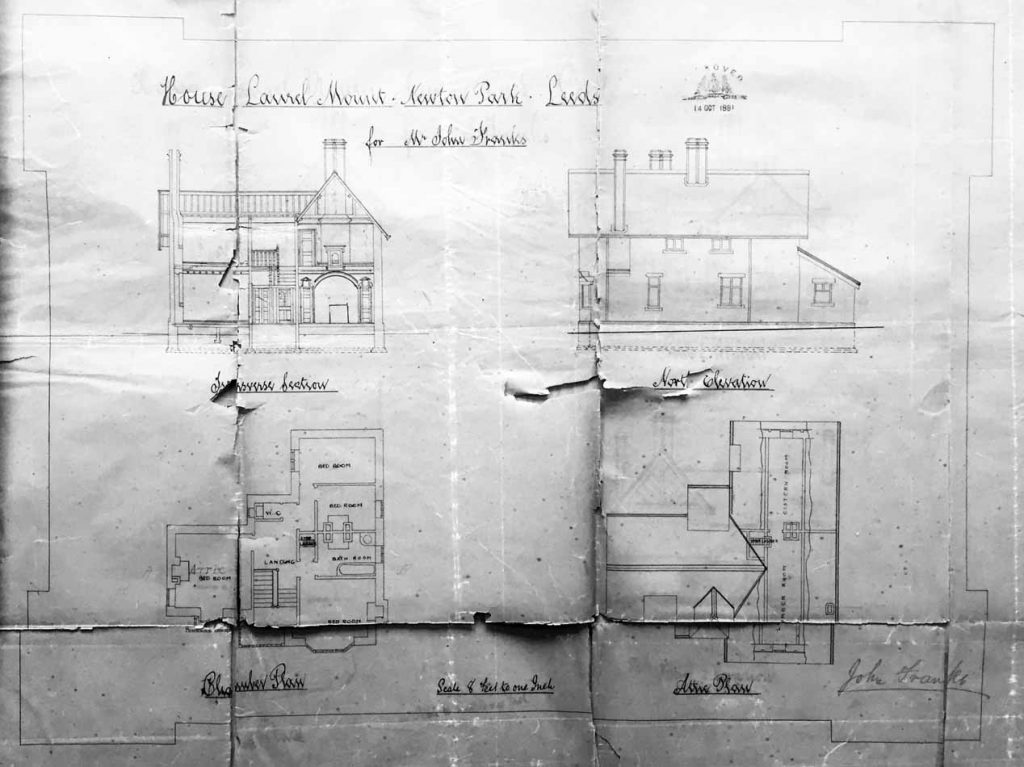 Building Plans for Oakfield and Eltonhurst

These are the building plans for across the road. They are a lot more detailed and produced on better quality paper and are in full colour. They detail who is responsible for each bit of the work and were produced four years after our house was built. 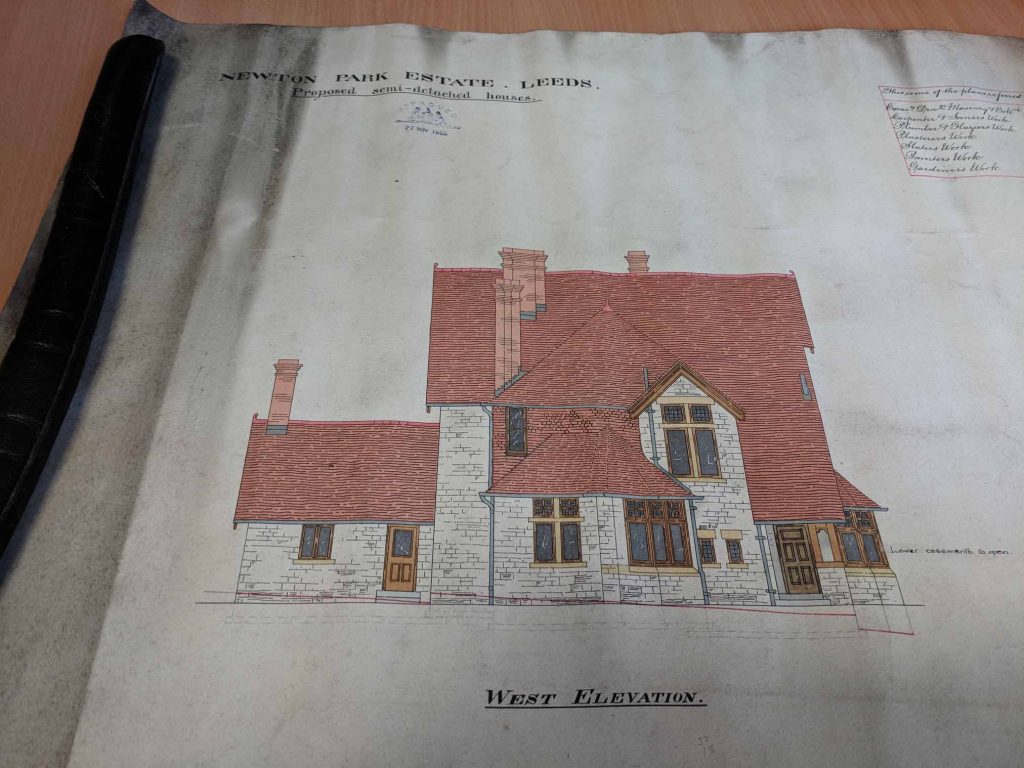 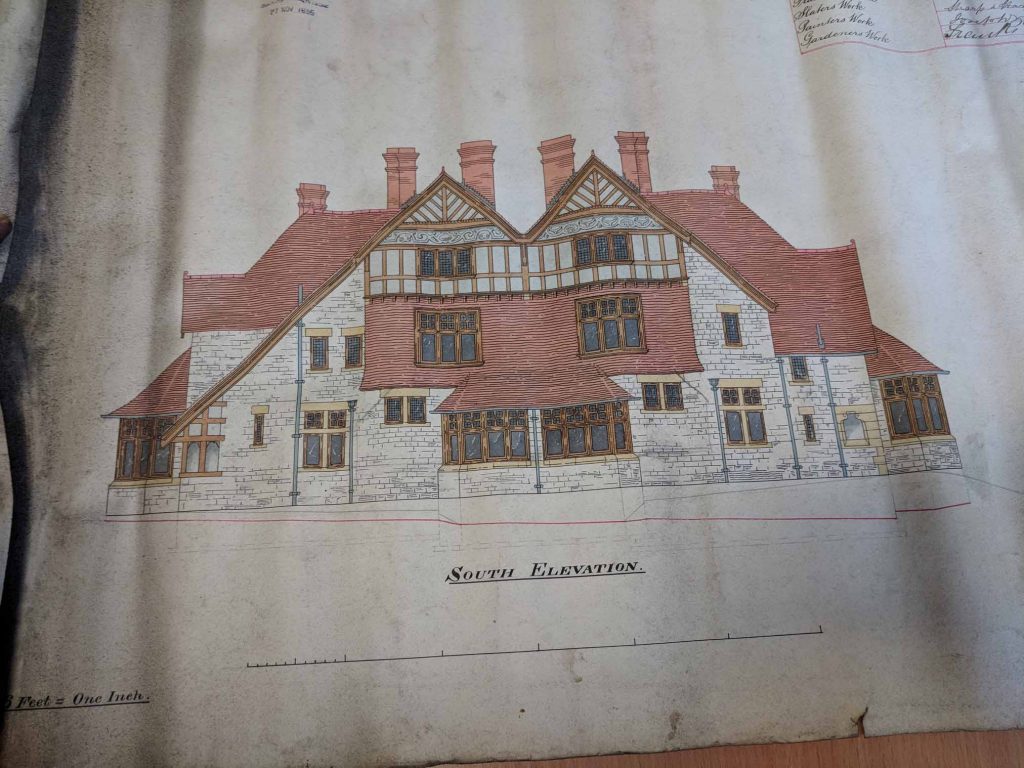 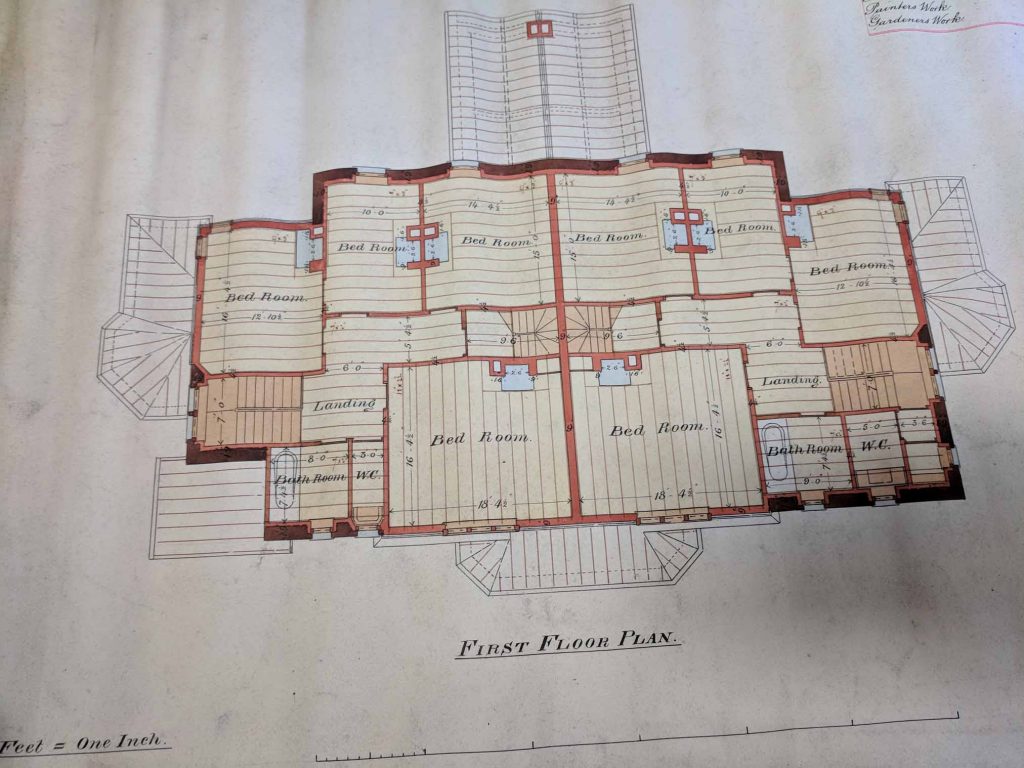 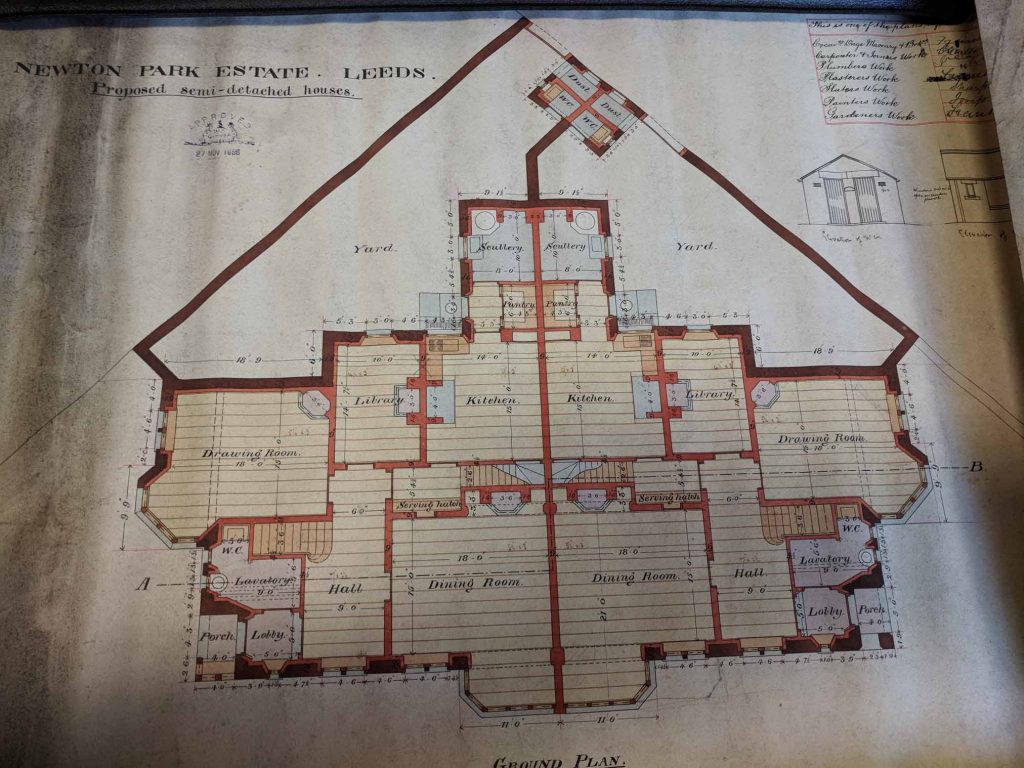 this is how the house across the road looks today

Our house was sold and bought by Hubert Kitchen who wanted to increase the size of the house. The previous owner Arthur Currer Briggs had already bought the plot of land to the North of the house so he could have a tennis court, but the new owner wanted another bedroom and a large greenhouse. An extension was to be added increasing the size of the servants are downstairs and creating an impressive master bedroom.  When looking through the west Yorkshire archive I came across a box relating to the architect Corson including various documents including Quantity of additions to “Redbank” Laurel Mount for H Kitchen. The folder of information was responses to tender for the works of alteration. It has all the builders quotes and a full detail of the cost to client detailing all the work, there are no drawings though everyone refers to them. It gives very clear briefs to all trades including, drainage, joinery, plastering, and painting. The total cost for the works is £290 for the alterations to the house and another £90 for the greenhouse. The renovations go ahead. A for sale notice in 1905 describes the house as having been wired for electric light and having a heated three compartment conservatory. The bathroom has also been updated to now have a shower. 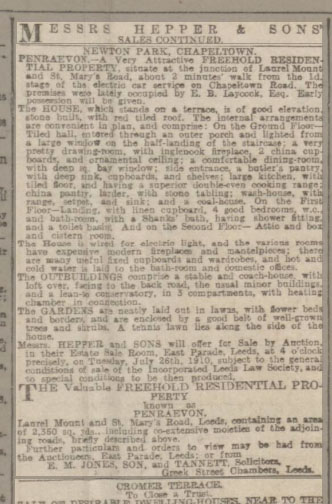 We will keep searching the archive to see if anything has been missed and maybe one day we will discover more.